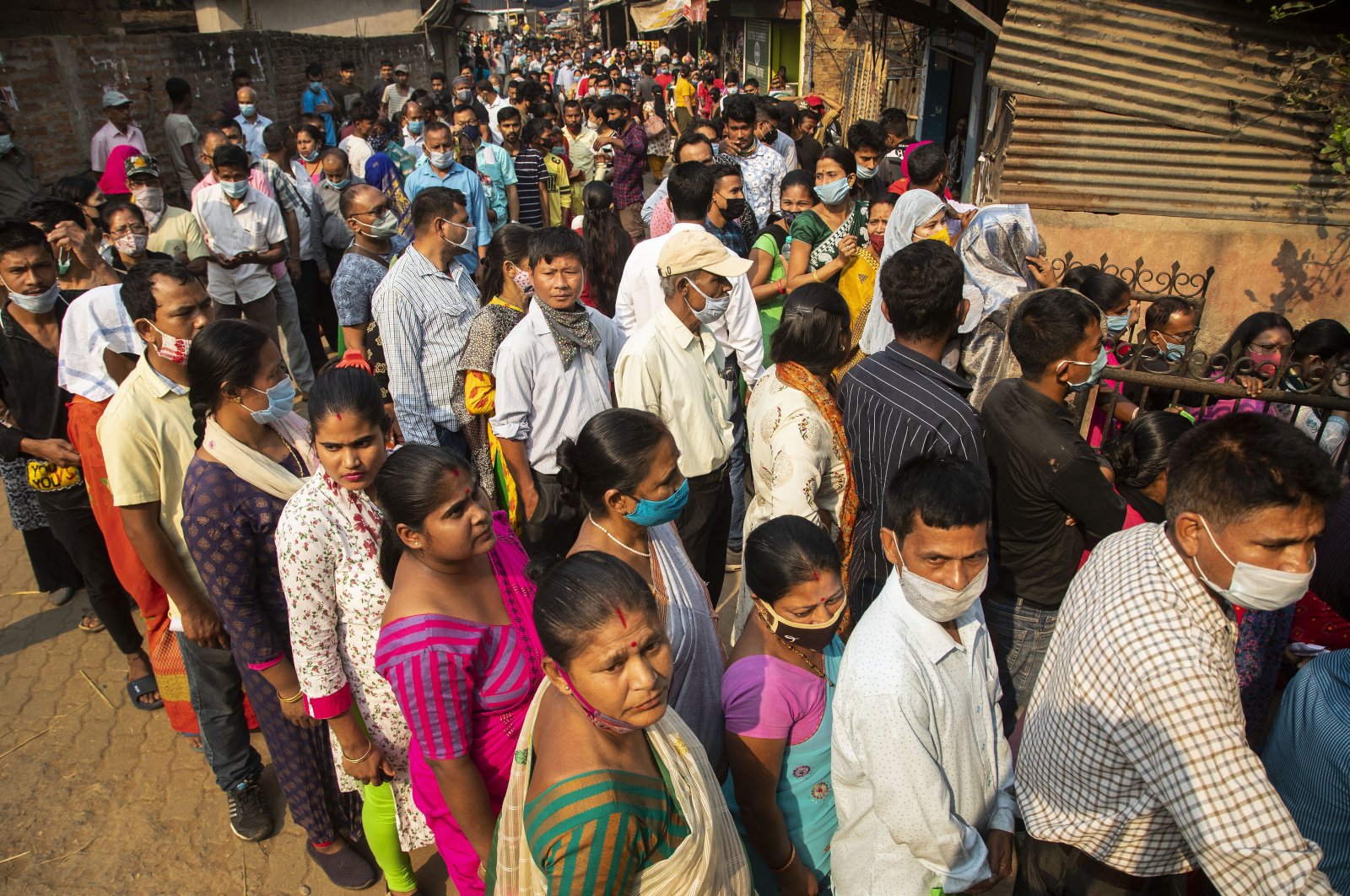 People stand in line to cast their votes in a polling station during the third phase of the assembly election in Gauhati, India, April 6, 2021. (AP Photo)
by ASSOCIATED PRESS Apr 06, 2021 11:56 am
RECOMMENDED

Residents in four Indian states and a union territory headed to polls to vote in the election, which is seen as a test for Prime Minister Narendra Modi's government, as its struggles to contain the spread of COVID-19 after the country reported over 100,000 infections Monday.

The elections are seen as crucial for Modi’s Bharatiya Janata Party (BJP) to gain a foothold in the northeast and south.

In eastern West Bengal and Assam states, where the third phase of elections is underway, Modi’s party is banking on its strong Hindu nationalist ideology to draw votes. But the contest is keenly watched in West Bengal, where Modi and his top leaders have campaigned heavily to wrest power from the state’s firebrand chief minister, Mamata Banerjee.

West Bengal, one of India’s most populous states, has never been ruled by Modi’s party. A defeat for Banerjee, a strong Modi critic, would deal a blow to the country’s already weak opposition.

In southern India, Modi’s party is vying for the third spot in Kerala, currently ruled by a Communist Party-led government. And in legislative elections in Tamil Nadu, it has allied with a powerful regional party as a junior partner.

Modi’s overall popularity remains unmatched in India, but his party has faced tougher-than-expected challenges in recent state polls. The election results will be declared on May 2.

The vote comes as coronavirus cases in India are rising faster than anywhere else in the world. India reported 96,982 new coronavirus infections in the last 24 hours on Tuesday.

Fatalities rose by 446, raising the death toll to 165,547 since the pandemic began. The latest surge in infections is worse than the last year’s peak. India now has a seven-day rolling average of more than 73,000 cases per day and has reported 12.7 million virus cases since the pandemic began, the highest after the United States and Brazil.

The government has intensified its vaccination drive in recent weeks, but the shots have been slow to reach India’s nearly 1.4 billion people. Experts say the surge is blamed in part on growing disregard for social distancing and mask-wearing in public spaces.

While on the campaign trail, politicians often showed little regard for social distancing and attended mammoth gatherings with tens of thousands of maskless people.