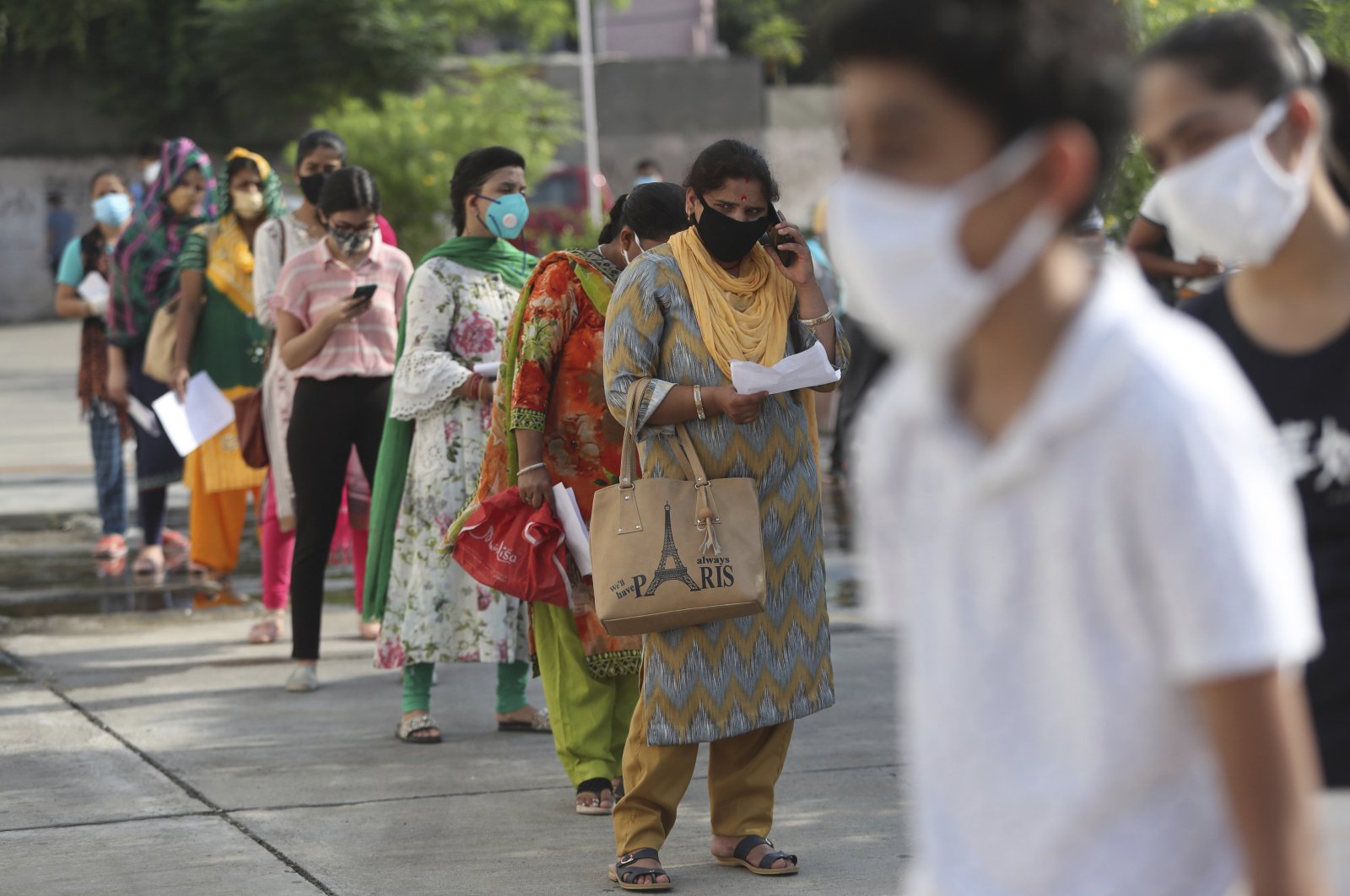 People wait in a queue to register their names to have their nasal swab samples taken to test for COVID-19 at a government hospital in Jammu, India, Sept. 15, 2020. (AP Photo)
by French Press Agency - AFP Sep 16, 2020 9:15 am
RECOMMENDED

India's total coronavirus cases passed 5 million on Wednesday, health ministry data showed, as the pandemic extends its grip on the vast country at an ever-faster rate.

With its latest 1 million cases recorded in just 11 days, a world record, India now has 5.02 million infections. Only the United States has more, with 6.59 million.

India has for some time been recording the world's biggest daily jumps in cases, and on Wednesday, the rise was just over 90,000 with a record 1,290 deaths.

While India took 167 days to reach 1 million cases, the next million came in just 21 days, faster than the U.S. and Brazil, according to The Times of India.

Even so, and with India now testing around a million people daily, many experts say that this is not enough and that the true number of infections may be far higher.

This has been borne out in several studies in recent weeks measuring antibodies against the virus among the cramped populations of megacities New Delhi and Mumbai.

The India Council for Medical Research, the country's lead pandemic agency, said last week that its survey had suggested that already in May, 6.5 million people were infected.

The same goes for deaths – 82,066 as of Wednesday, less than half the U.S. toll of 195,000 – with many deaths not properly recorded by authorities even in normal times.

India has one of the world's most poorly funded health care systems, and the nation of 1.3 billion people is home to some of the most densely populated cities and towns.

The sharp rise in cases is despite Prime Minister Narendra Modi's government imposing in late March one of the world's strictest lockdowns, leaving tens of millions of people in the informal labor market jobless almost overnight.

The lockdown saw complete travel bans, shutting down of businesses and factories and the flight of millions of poor migrant workers from big cities to their villages, which experts say caused the virus to spread from urban centers to small towns.

India's gross domestic product (GDP) slumped nearly 24% in the first quarter, one of the steepest drops among major economies.

The lockdown has been steadily eased even as infections soar, with schools set to open for some classes on Monday – along with tourist hot spot the Taj Mahal.

"Initially there was a fair amount of rigor in the lockdown, but subsequently there was some relaxation before it was completely lifted," K. Srinath Reddy, head of health charity the Public Health Foundation of India, told Agence France-Presse (AFP).

"It sent a wrong signal to the people that possibly we have got things reasonably under control and now the economy takes precedence. The virus is now infecting more people and penetrating deeper into smaller towns."