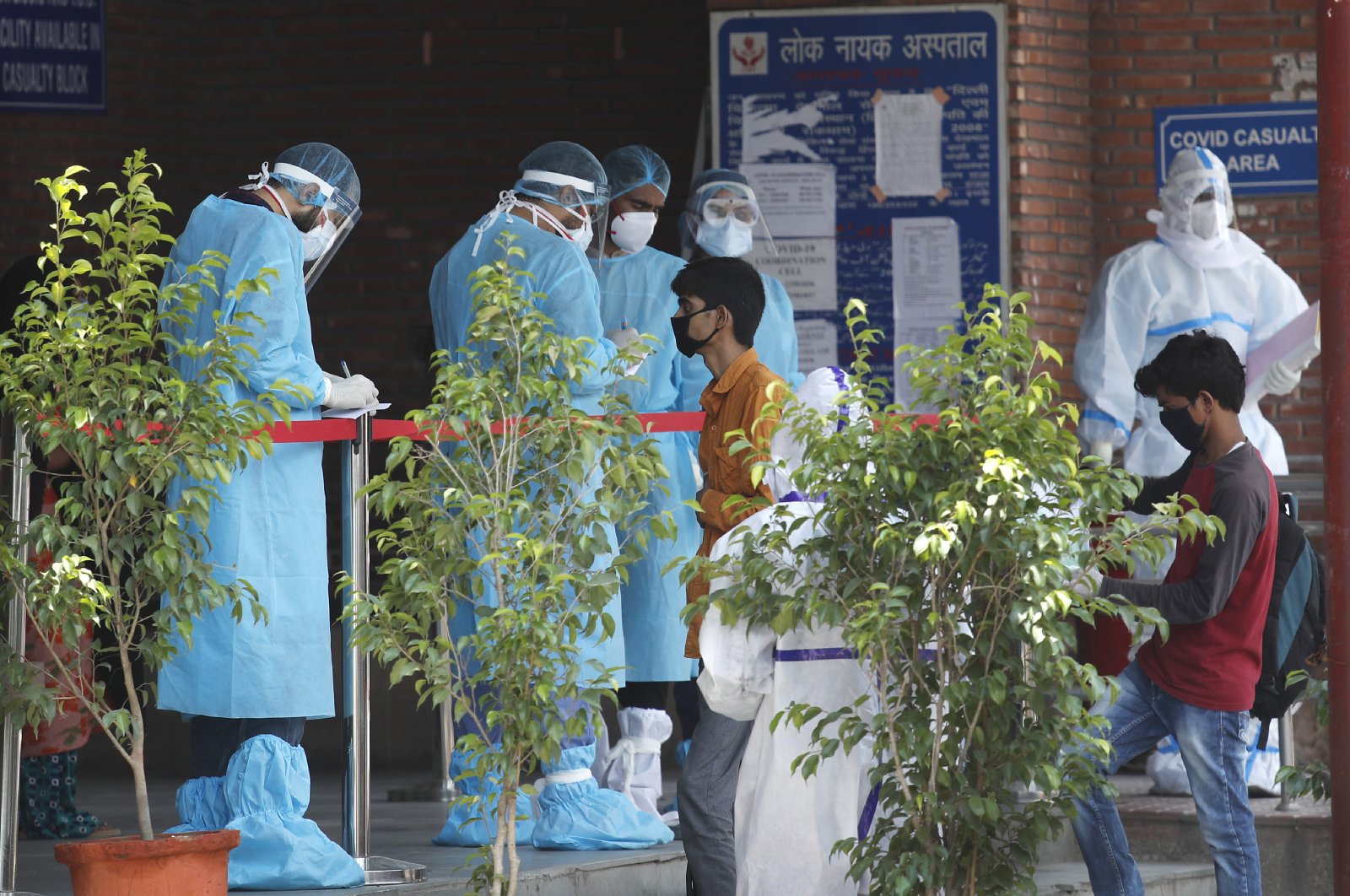 Doctors in personal protective suits check the papers of people whose relatives are admitted in a COVID-19 government designated hospital, in New Delhi, India Tuesday, June 23, 2020. (AP Photo)
by Agencies Jun 27, 2020 9:46 am
RECOMMENDED

India’s confirmed coronavirus cases crossed half a million on Saturday with another record 24-hour jump of 18,552 infections.

The surge prompted authorities in the northeastern state of Assam to impose a two-week lockdown in the state capital of Gauhati. About 700 new cases were reported there in just four days.

Health Minister Himanta Biswa Sarma said the rest of Assam will be placed under a night curfew and weekend lockdowns.

He urged people to store essential goods and signaled a tighter lockdown where even grocery stores would be closed.

The pandemic is not expected to peak in India for several more weeks and experts say the number of cases could pass one million before the end of July.

Some state governments are considering imposing new lockdowns. A hard-hitting nationwide lockdown that started March 25 is gradually being eased because of the damage caused to the economy.

The virus has particularly hit India's densely populated cities and there are now major concerns for New Delhi, which has overtaken Mumbai with nearly 80,000 cases. The city's government has predicted it will have 500,000 infections by the end of July. It is already using railway carriages to house patients and has taken over hotels and banquet halls to relieve the pressure on hard-pressed hospitals.

The government has been criticized over a lack of testing that experts say has hidden the true number of cases in India, which now stands at 509,000.

The country is currently fourth in the world for the number of infections, behind the United States, Brazil and Russia, though it has a much lower death toll.

China has reported an uptick in new coronavirus cases, a day after the nation’s Centers for Disease Control said it expects an outbreak in Beijing to be brought under control soon.

The National Health Commission said Saturday that 21 cases had been confirmed nationwide in the latest 24-hour period, including 17 in the nation’s capital.

City officials have temporarily shut a huge wholesale food market where the virus spread widely, re-closed schools and locked down some neighborhoods.

According to China's CDC, testing has found only a few infected people without a link to the market and that the steps taken mean the risk of further spread is low, the official Xinhua News Agency said. Anyone leaving Beijing is required to have a negative result from a nucleic acid test within the previous seven days.

Many Chinese are traveling during a four-day holiday weekend that ends Sunday.

China has reported 83,483 confirmed cases and 4,634 deaths in the pandemic. People who test positive but show no symptoms are not included in its official case count.

South Korea has reported 51 newly confirmed cases of the coronavirus as fresh clusters continue to emerge in the densely populated Seoul area. They bring the national caseload to 12,653, including 282 deaths.

Thirty-five of the new cases came from Seoul and nearby cities and towns, which have been at the center of a COVID-19 resurgence since late May. Twelve others were linked to international arrivals. Health authorities are struggling to trace contacts and predict infection routes with new clusters popping up from just about everywhere.

Hundreds of infections have been linked to nightspots, church gatherings, restaurants and low-income workers such as door-to-door salespeople and warehouse employees. Officials have so far resisted calls to reimpose stronger social distancing guidelines after easing them in mid-April, citing concerns about a fragile economy.