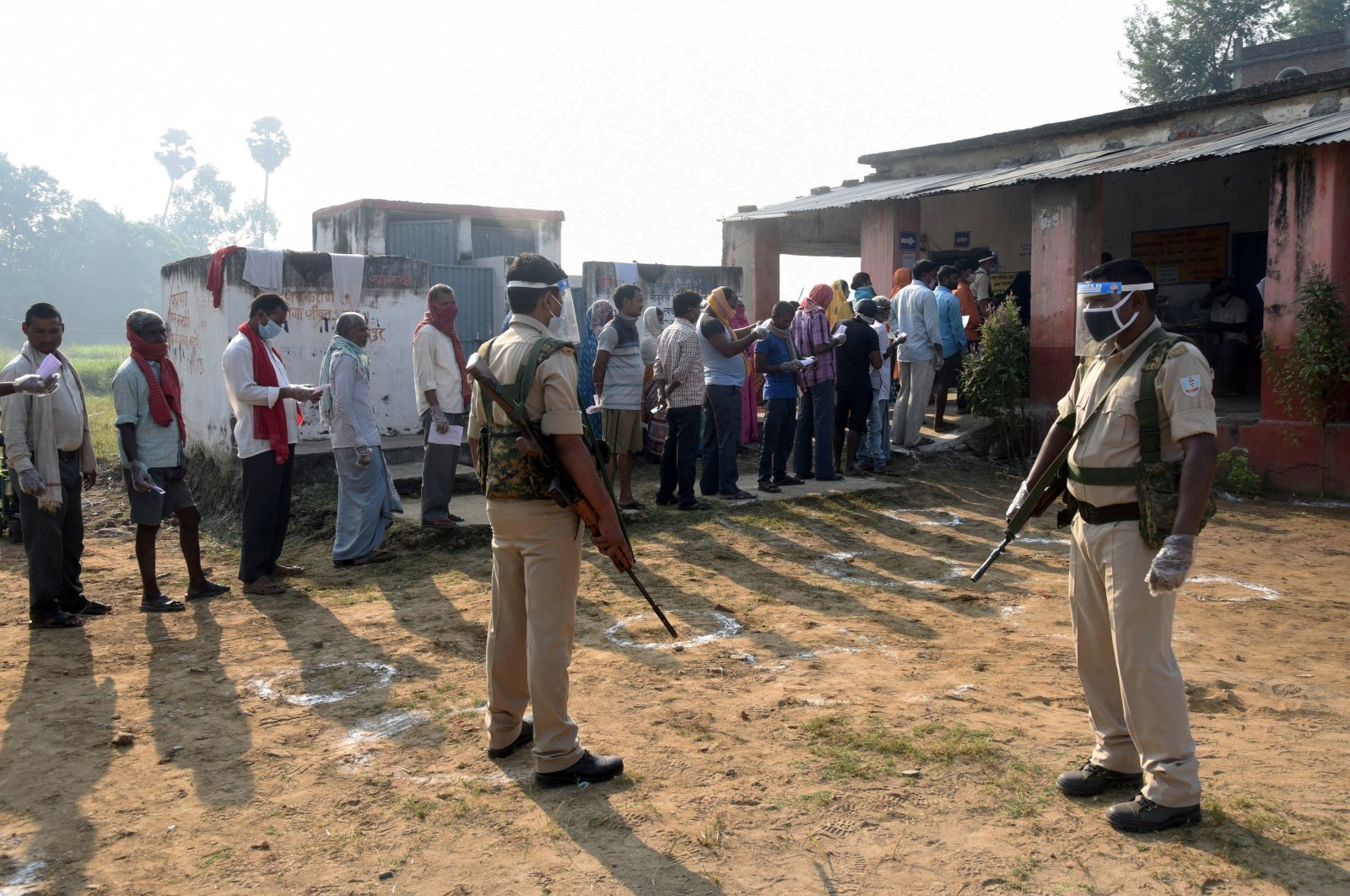 Policemen wearing protective face shields stand guard as voters stand in a queue to cast their vote outside a polling booth at a village on the outskirts of Patna in the eastern state of Bihar, India, Oct. 28, 2020. (REUTERS Photo)
by ASSOCIATED PRESS Oct 28, 2020 1:41 pm
RECOMMENDED

Voting began Wednesday in India’s third-largest state of Bihar, the first major election in the country since the pandemic and a test for Prime Minister Narendra Modi’s popularity as he faces criticism on many fronts.

India has registered nearly 8 million confirmed coronavirus cases, behind only the United States, even as daily infections have fallen by about half and deaths by about a third in recent weeks. More than 120,010 people have died.

The eastern Bihar state, with a population of 122 million people, has reported more than 200,000 cases and there are concerns over a surge in infections during the elections. More than 70 million voters are eligible to cast ballots for 243 assembly seats and polling is divided into three phases.

Nearly 21 million voters are registered for the first phase Wednesday. The results will be declared on Nov. 10.

India’s Election Commission has taken a series of measures in its effort to halt the spread of the virus. It has increased the number of polling stations, extended the voting time by one hour at most places and sanitization of electronic voting machines has been made mandatory. Authorities will also conduct temperature checks at entry points and voters will be provided hand sanitizers, soap and water.

Bihar is one of India’s poorest states but a key electoral battleground where Modi’s Bharatiya Janata Party (BJP) has been in power for more than a decade as a partner in an alliance with a regional party, the Janata Dal United. It's led by Nitish Kumar, who is being accused of not doing enough to lift the region out of poverty. Wednesday’s polls pit the ruling alliance against the regional Rashtriya Janata Dal, led by Tejashwi Yadav.

Yadav’s party, which remains tainted by corruption allegations and is teamed up with the Indian National Congress, has made employment for youth its main election promise.

Modi’s party was more focused on nationalistic policies. Its leaders often evoked the erosion of semi-autonomy of Muslim-majority Kashmir last summer and the recent border clash with China in Ladakh to garner votes.

BJP also found itself in the middle of a row when Finance Minister Nirmala Sitharaman promised free vaccination to people of Bihar. The promise angered the Congress and other opposition parties, which accused BJP of politicizing the pandemic and playing on people’s fears.

The polls are seen as a gauge for Modi’s popularity.

His second term has been marked by many convulsions. The economy has tanked, social strife widened, countless protests have erupted against discriminatory laws and his government has been questioned over its response to the pandemic. In the past two years, BJP has lost six state elections and gained power only in one.

Bihar could also be a tough challenge for Modi’s party for other reasons.

When Modi announced a sweeping lockdown to stall the spread of coronavirus in March, millions of migrant workers were forced to leave big cities and return to their villages, more than 2 million in Bihar alone. The lockdown also resulted in huge job losses in the state and ravaged its poor economy.

Pollsters are expecting the ruling coalition to retain power with a razor-thin margin but say the government’s handling of the virus and the implementation of a hasty lockdown could deliver a surprise verdict.