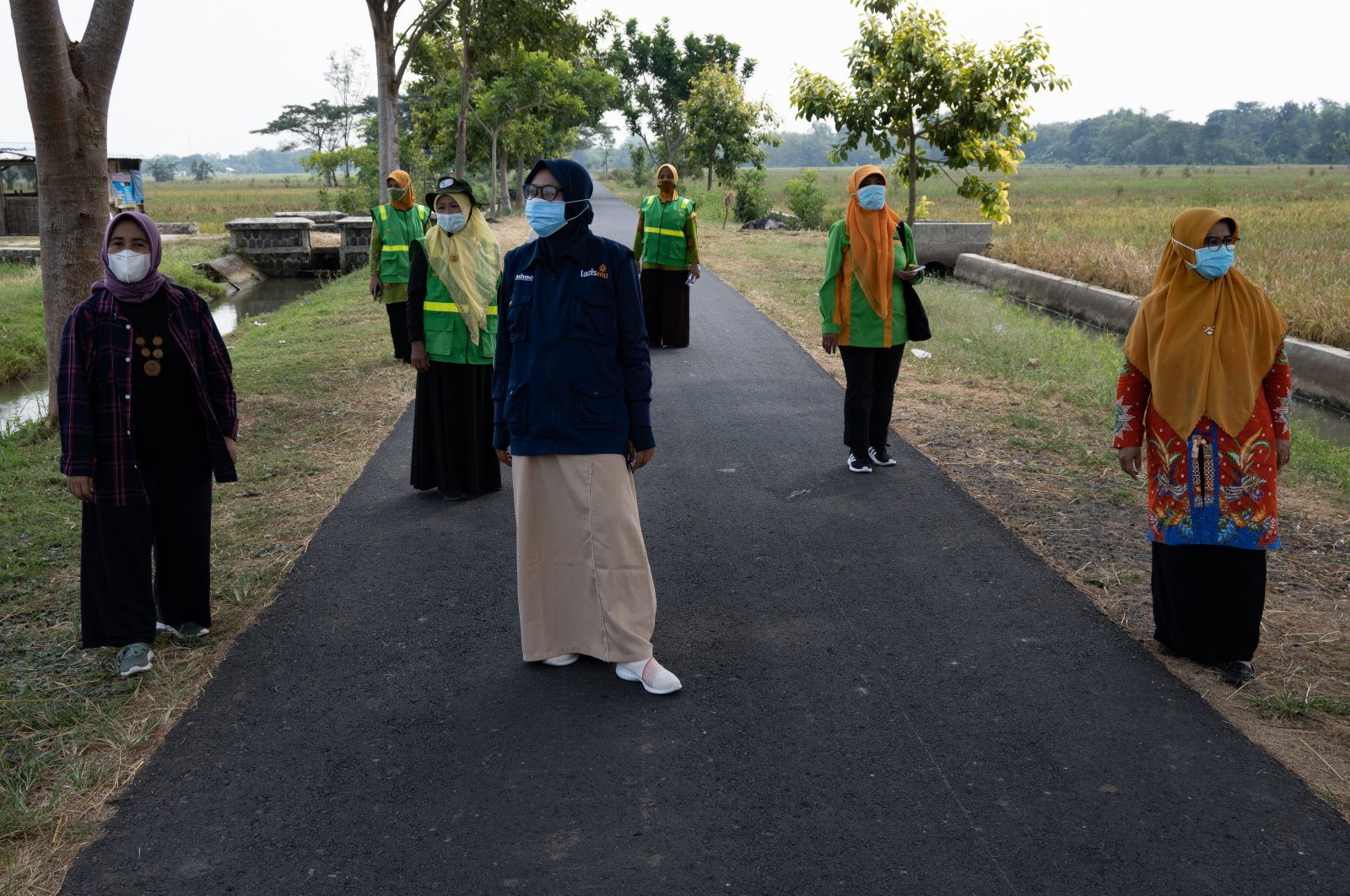 National and regional leaders of 'Aisyiyah's environmental chapter stand between trees the group planted in Sukoharjo, Central Java province, Indonesia on May 5, 2021.(Reuters/Harry Jacques Photo)
by REUTERS May 13, 2021 1:22 pm
RECOMMENDED

A Muslim nongovernmental organization (NGO) in Indonesia is striving to promote environmental awareness this Eid al-Fitr, also known as Ramadan Bayram, which marks the end of the holy month of Ramadan.

“We bring the Hadith (teachings of the prophet Muhammad) to explain why the impact of climate change is important,” said Hening Purwati Parlan, national head of 'Aisyiyah NGO's environment wing, the LLHPB.

In 2015, 'Aisyiyah's leadership set up its LLHPB environment wing to increase women’s capacity to respond to climate change and natural disasters.

After a drought dried up wells here, volunteers from the group purchased gallons of water from the local utility for affected households, Ismokoweni, who leads 'Aisyiyah's local environmental chapter and goes by one name, told Reuters shortly before Eid al-Fitr.

'Aisyiyah also initiated a “Green Ramadan” program, holding evening talks on how families can reduce waste and the use of plastics during the Islamic fasting month.

“It is explained in the Quran that it is important to do good in the month of Ramadan,” Rahma Susanti, head of the LLHPB in West Kalimantan province, said in an online interview.

“Protecting our ecosystem and environment is one of these good things.”

“We are creative women,” said Hening. “We are not rich, but we have solutions.”

'Aisyiyah was founded in 1917 to advocate for education at a time when girls did not receive formal schooling.

Today 'Aisyiyah, part of Indonesia's larger Muhammadiyah organization, has at least 4 million members with branches throughout the world's largest Muslim-majority country, where more than 80% of the population of about 270 million identify as Muslim.

'Aisyiyah has drawn on its national network to advocate for reproductive rights and prevent child marriage.

It also operates thousands of schools and runs diverse social programs to promote breastfeeding and improve child and maternal nutrition, among other things.

Alimatul Qibtiyah, a professor who sits on the National Commission on Violence against Women and is an 'Aisyiyah member, said the group cooperates with the national government as well as many other organizations, including from different faiths.

In recent years, it has increasingly turned its attention to the environment.

Last month, in the run-up to Ramadan, Hening a former journalist who now works as an environmental consultant, called for Muslim women to observe an “eco-jihad.”

“Jihad is an Arabic word that literally means striving or struggling, especially with a praiseworthy aim,” Hening told the Thomson Reuters Foundation. “So eco-jihad means striving to protect our ecosystem.”

'Aisyiyah volunteers said the term resonated among women who see stewardship of the environment as elemental to their faith.

“We have to consider that all the damage we do now will have a fatal impact in the future,” said Rahma in West Kalimantan.

In Sumatra’s Riau province, the LLHPB is preparing to work with the national peatland and mangrove restoration agency to rehabilitate degraded forests and land.

The teaching of environmental principles is nothing new in the world's second-largest religion, which says humans are guardians of the natural environment.

A 2013 study in West Sumatra province by British and Indonesian researchers found that environmental awareness increased when the message was delivered in Islamic talks and lessons, especially among women.

The Indonesian Ulema Council, established in 1975 as the country's main clerical body, has issued a series of environmental edicts against the burning of land and illegal logging since 2010.

Forestry experts say reforestation initiatives have faced numerous challenges in Indonesia, such as weak seedlings and poor maintenance once the trees have been planted.

“Increasingly, communities are being expected to have greater roles in tree-planting initiatives," said Ani Adiwinata Nawir, a scientist with the Indonesia-based Center for International Forestry Research.

The peatland and mangrove restoration agency plans to work with community groups and businesses to meet a national target of replanting 600,000 hectares of mangrove forests by 2024.

Most of Indonesia’s planet-heating emissions stem from land conversion and the government has pledged to reduce emissions by at least 29% by 2030 from a business-as-usual scenario, requiring radical reforms to how land and forests are treated.

Indonesia’s environment ministry has prioritized almost 4 million hectares for rehabilitation by 2030, which it expects will require billions of trees to be planted this decade.

The trees along the road in Sukoharjo are a fraction of the 4,700 seedlings planted by 'Aisyiyah volunteers since the end of last year.

In March, 'Aisyiyah announced plans to plant 5 million fruit trees in homes and gardens, partly to boost food security during the coronavirus pandemic.

Volunteers said the environmental work would continue to be funded mainly by donations and their own fundraising activities.

“Jihad really means to struggle,” said Hening. “Everyone in their life struggles to do the best (they can).”