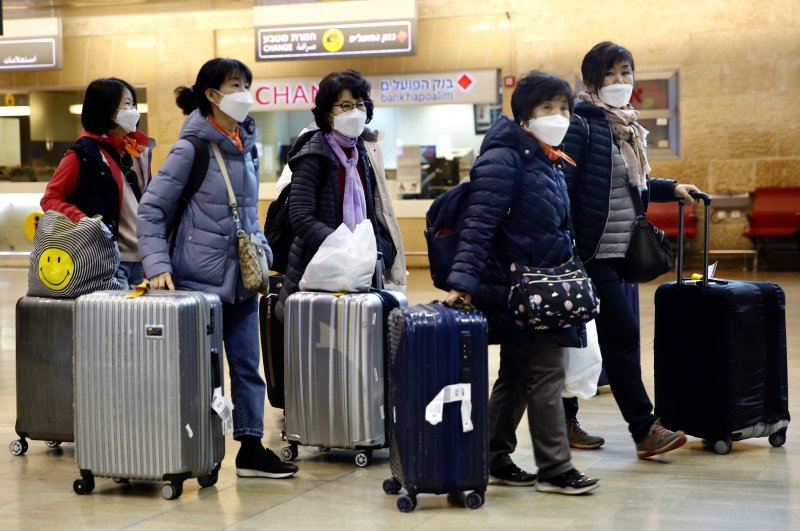 Tourists from Korea wearing protective masks walking with their belongings while waiting for a flight back to South Korea at the Ben Gurion airport near Tel Aviv, Israel, Monday, Feb. 24, 2020. (AP Photo)
by French Press Agency - AFP Feb 24, 2020 10:29 am
RECOMMENDED

"Another passenger who returned from the cruise ship in Japan has tested positive," a health ministry statement said.

"The patient is in isolation and under supervision and was not infected in Israel," it said.

The first case was announced on Friday.

The two were among 11 Israelis allowed off the ship in Yokohama, Japan and flown home after initially testing negative. All were placed in isolation for a 14 day period at the Sheba Medical Center near Tel Aviv.

Earlier Sunday Israeli authorities ordered nearly 200 pupils into home quarantine after they were in proximity to South Korean tourists carrying the coronavirus.

The move came after the South Korean visitors, members of the Shincheonji Church of Jesus, toured Israeli sites between February 8-15 and upon their return home 18 of them were discovered to be infected with the virus.

Israel's health ministry urged people who might have encountered these tourists to self-quarantine, including 180 pupils and 19 staff from three separate schools who it said had close contact.

The pupils and staff, including 18 teachers and a guard, were instructed "to remain home" for 14 days, the education ministry said.

The health ministry also published a detailed list of the sites visited by the South Korean tourists, ordering "anyone who has been in touch with the pilgrims" to "home-quarantine until 14 days from the encounter with the group have passed".

Prime Minister Benjamin Netanyahu chaired a high-level special meeting on the COVID-19 virus and announced a taskforce to manage the threat.

"Today, I will appoint a ministerial team to convene on a daily basis in order to deal with this major challenge," he said in remarks after the meeting, which included senior security officials.

On Saturday Israel refused to allow some 200 non-Israelis to disembark from a plane which arrived from South Korea, as part of measures against the new coronavirus.

The health ministry has also ordered its citizens to observe an obligatory 14-day home-quarantine if they have recently visited Japan, South Korea, mainland China, Hong Kong, Macau, Singapore or Thailand.

"In addition, anyone who has been in Taiwan, Italy or Australia in the past 14 days and is developing the disease's symptoms should be examined," the ministry said in a statement.

Internal Security Minister Gilad Erdan, who attended Sunday's situation assessment, warned that law enforcement would act against those found to be disobeying the self-quarantine order.

"The Israeli police have prepared all the necessary enforcement teams in the event that there may be citizens who do not obey the instructions," he told journalists, without elaborating.

He also warned those who might consider exploiting the scare to disrupt a hotly-contested March 2 general election.

He said that concerns included the spreading of fake news in order to affect voter turnout.

"This is a criminal offense," he said. "There is special readiness by the police to prevent abuse.

Meanwhile, Palestinian health minister Mai al-Kaila said there were no confirmed cases in the West Bank, but that to manage the threat her office was coordinating with Egypt, Jordan and Israel.

Cooperation with Israel "is only in the matter of coronavirus," she said.