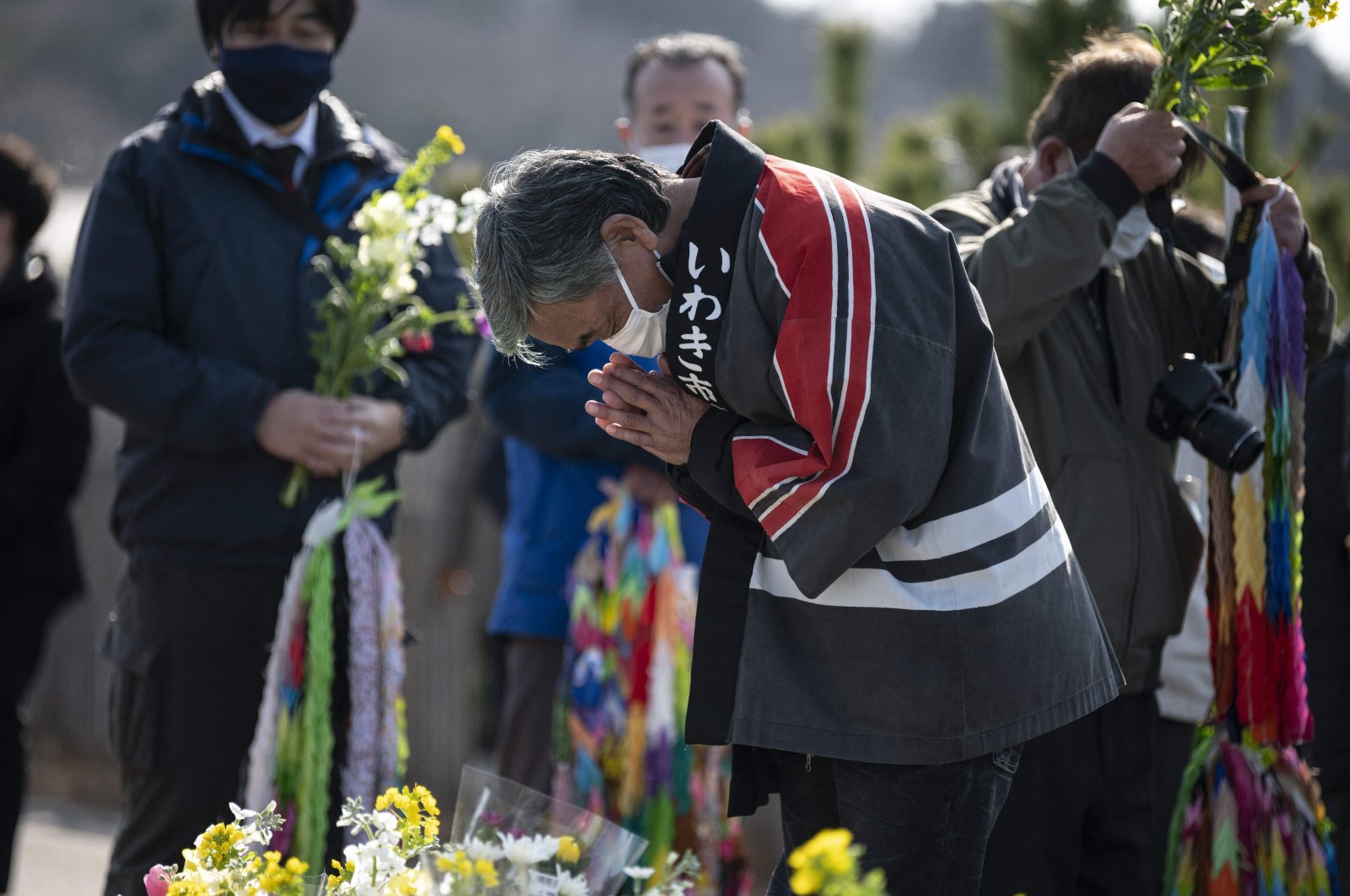 A man prays in front of the sea in Hisanohama, Fukushima prefecture on the 10th anniversary of the 9.0 magnitude earthquake which triggered a tsunami and nuclear disaster, Japan, March 11, 2021. (AFP)
by Agencies
Mar 11, 2021 8:34 am

Japan held memorials, commemorations and ceremonies across the country Thursday to mark the 10th anniversary of the earthquake, tsunami and nuclear disasters that hit its northeastern region in 2011, an area where many survivors' lives are still on hold.

Carrying bouquets, many walked to the coast or graves to pray for relatives and friends washed away by the tsunami.

At 2:46 p.m., the exact moment the earthquake struck a decade ago, Emperor Naruhito and his wife led a moment of silence to honor the dead in a commemorative ceremony in Tokyo. Silent prayers were held throughout the country.

Prime Minister Yoshihide Suga told the memorial ceremony that the loss of life was still impossible to contemplate.

"It is unbearable when I think of the feelings of all those who lost their loved ones and friends," said Suga, dressed in a black suit.

At the ceremony, attended by the emperor and the prime minister, the attendees wore masks, kept their distance and did not sing along with the national anthem, to prevent the spread of COVID-19.

"I would like to express condolences from the bottom of my heart to everybody who suffered from the effects of the disaster," Suga added, reaffirming support for those affected by the disaster.

The magnitude 9 earthquake that struck on March 11, 2011, was one of the biggest temblors on record and set off a massive tsunami that swept far inland, destroying towns and causing meltdowns at the Fukushima Daiichi nuclear plant.

More than 18,000 people died, mostly in the tsunami, and nearly half a million people were displaced. Ten years later, more than 40,000 people are still unable to return home, most of them from Fukushima, where areas near the destroyed plant are still off-limits due to radioactive contamination.

Roads, train lines and other key infrastructure and housing have mostly been rebuilt at a cost of more than 30 trillion yen ($280 billion), but land still remains empty in coastal towns further north in Miyagi and Iwate prefectures, where the existing population losses were accelerated by the disaster, reported The Associated Press (AP).

About 50 kilometers (31 miles) south of the plant, in the gritty coastal city of Iwaki, which has since become a hub for laborers working on nuclear decommissioning, restaurant owner Atsushi Niizuma prayed to his mother who was killed by the waves.

"I want to tell my mother that my children, who were all close to her, are doing well. I came here to thank her that our family is living safely," Niizuma, 47, told Reuters.

Before setting off for work, he quietly paid his respects at a stone monument at a seaside shrine with carvings of his mother's name, Mitsuko, and 65 others who died in the disaster.

On the day of the earthquake, Mitsuko was looking after his children. The children rushed into a car but Mitsuko was swept away by the waves as she returned to the house to grab her belongings. It took a month to recover her body, Niizuma said.

In Otsuchi town in the Iwate prefecture, where the tsunami destroyed the town hall, killing about 40 employees, their families wearing dark suits gathered at the empty land where the town hall used to stand.

The Akiba shrine has become a symbol of resilience for the survivors, as it was barely damaged by the tsunami while houses nearby were swept away or burned down.

About two dozen residents gathered with Niizuma to decorate it with paper cranes, flowers and yellow handkerchiefs with messages of hope sent by students from across the country.

"It was sleeting 10 years ago, and it was cold. The coldness always brought me back to the memory of what happened on the day," Hiroko Ishikawa, 62, told Reuters.

"But with my back soaking up the sun today, we are feeling more relaxed. It's as if the sun is telling us that 'It's okay, why don't you go talk with everyone who came back to visit their hometown?'"

In Ishinomaki, Miyagi prefecture, dozens of residents prayed at a cenotaph carrying the names of more than 3,000 victims in town. Nobody died from the direct impact of the radiation, but Fukushima has fallen behind in the recovery efforts because of the radiation impact, with 2.4% of the prefectural land still labeled no-go zones near the Fukushima Daiichi plant.

The decommissioning of its melted reactors is an unprecedented challenge, with some questioning after 10 years of work whether it can be done at all, according to AP.

Meanwhile, Japan is again debating the role of nuclear power in its energy mix as the resource-poor country aims to achieve carbon neutrality by 2050 to fight global warming. However, an NHK public TV survey showed 85% of the public is worried about nuclear accidents.

The mass demonstrations against nuclear power seen in the wake of 3/11 have faded, but distrust lingers. Some anti-nuclear activists are planning demonstrations in front of the operator of the plant, Tokyo Electric Power, for Thursday night, reported Reuters.

Only nine of Japan's 33 remaining commercial reactors have been approved for restarts under post-Fukushima safety standards and only four are operating, compared with 54 before the disaster.

Nuclear power supplied just 6% of Japan's energy needs in the first half of 2020 compared with 23.1% for renewable sources, far behind Germany's 46.3%, and nearly 70% for fossil fuels.

Thursday’s ceremony was the last national commemoration for the 2011 disaster organized by the government. It comes just two weeks before the Olympic torch run begins from Fukushima ahead of the delayed Tokyo Summer Games in July.

Suga has said the Olympics will showcase Japan's recovery from the disaster and will be proof of human victory against the coronavirus pandemic, but some disaster survivors say their recovery is still only half-finished.

The virus will also affect events elsewhere, including an annual prayer gathering held on top of the imposing sea walls in the town of Taro in Iwate.

Participants usually hold hands as they pray for those lost in the tsunami, but this year they will observe social distancing as they remember the dead.

Meanwhile, others in the country marked the day by raising awareness for disaster prevention. In Kyoto, western Japan, authorities conducted emergency drills.

Tributes and condolences poured in from around the world, with everyone from United Nations Secretary-General Antonio Guterres to singer Lady Gaga offering their thoughts on the anniversary, reported Agence France-Presse (AFP).