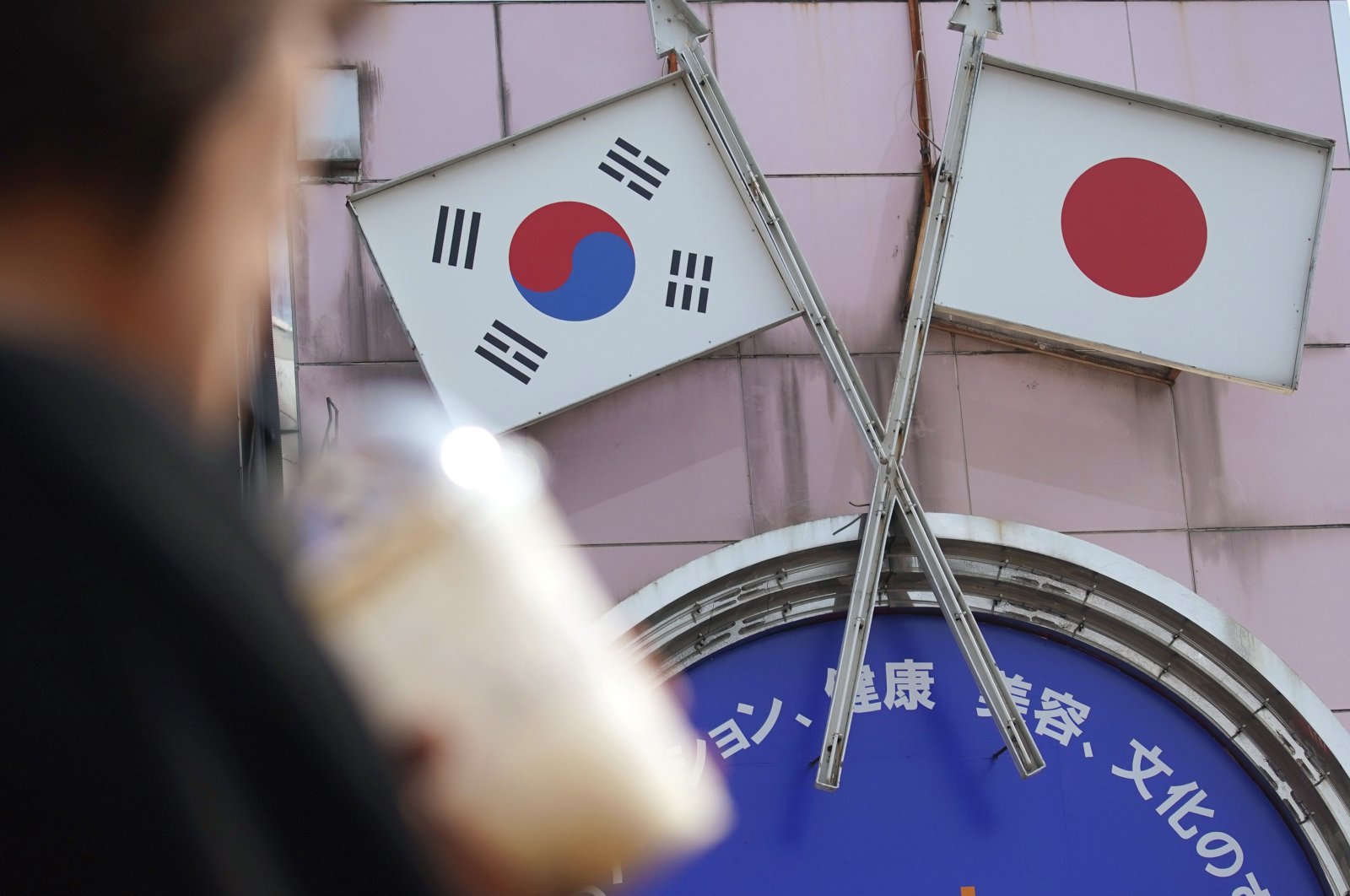 A woman walks past an advertisement featuring Japanese and South Korean flags at a shop in the Shin Okubo area in Tokyo, Japan, Aug. 2, 2019. (AP Photo)
by ASSOCIATED PRESS Oct 15, 2021 6:27 pm
RECOMMENDED

The leaders of Japan and South Korea spoke by phone Friday, saying they would look to deepen ties in the face of regional security threats despite strained bilateral relations.

Although they share a key ally in the United States and common concerns over facing China, ties between Tokyo and Seoul have suffered over the legacy of Japan's World War II atrocities and disagreements over compensation for wartime Korean laborers during the Japanese occupation.

New Japanese Prime Minister Fumio Kishida only spoke with Korean President Moon Jae-in after he'd spoken with a number of other world leaders, underlining chilly relations between the erstwhile allies.

In the 35-minute phone conversation, Kishida told Moon that it is essential they deepen cooperation between them as well as with the U.S. in the face of serious security threats in the region, the Japanese foreign ministry said in a statement. The two leaders restated their commitment to security cooperation.

Moon's office said he praised Kishida over his recent comment expressing willingness to meet with North Korean leader Kim Jong Un and that resumption of diplomacy with the North would be crucial in preventing the country from advancing its nuclear weapons program and stabilizing the Korean Peninsula.

Kishida said North Korea’s nuclear and missile developments remain a threat to the region and that he hopes for a quick resumption of nuclear talks between Washington and Pyongyang.

In the past few years, relations between Tokyo and Seoul reached a low point following South Korean court rulings that ordered Japanese companies to pay reparations to Korean laborers over their abuses during World War II. The rulings have led to further tensions over trade. Another sticking point is Korean “comfort women” who were sexually abused by Japan’s wartime military occupation.

“Relations between Japan and South Korea continue to be in severe conditions," Kishida told reporters Friday.

Kishida called on South Korea to take “concrete, firm action” to improve communication and diplomacy between the two countries, adding he was waiting “for its move."

Moon said the two countries have different “legal interpretations” over the 1965 treaty, suggesting further discussions toward a diplomatic solution, and that the impasse over the “comfort women" issue needs to be resolved quickly, with only 14 survivors still alive, his office said.

Japan and South Korea have been trying to improve ties since President Joe Biden took office calling for stronger three-way cooperation in the face of North Korean nuclear threats and challenges posed by China.

There has been little improvement. Kishida said there is no plan for an in-person summit between the two countries.