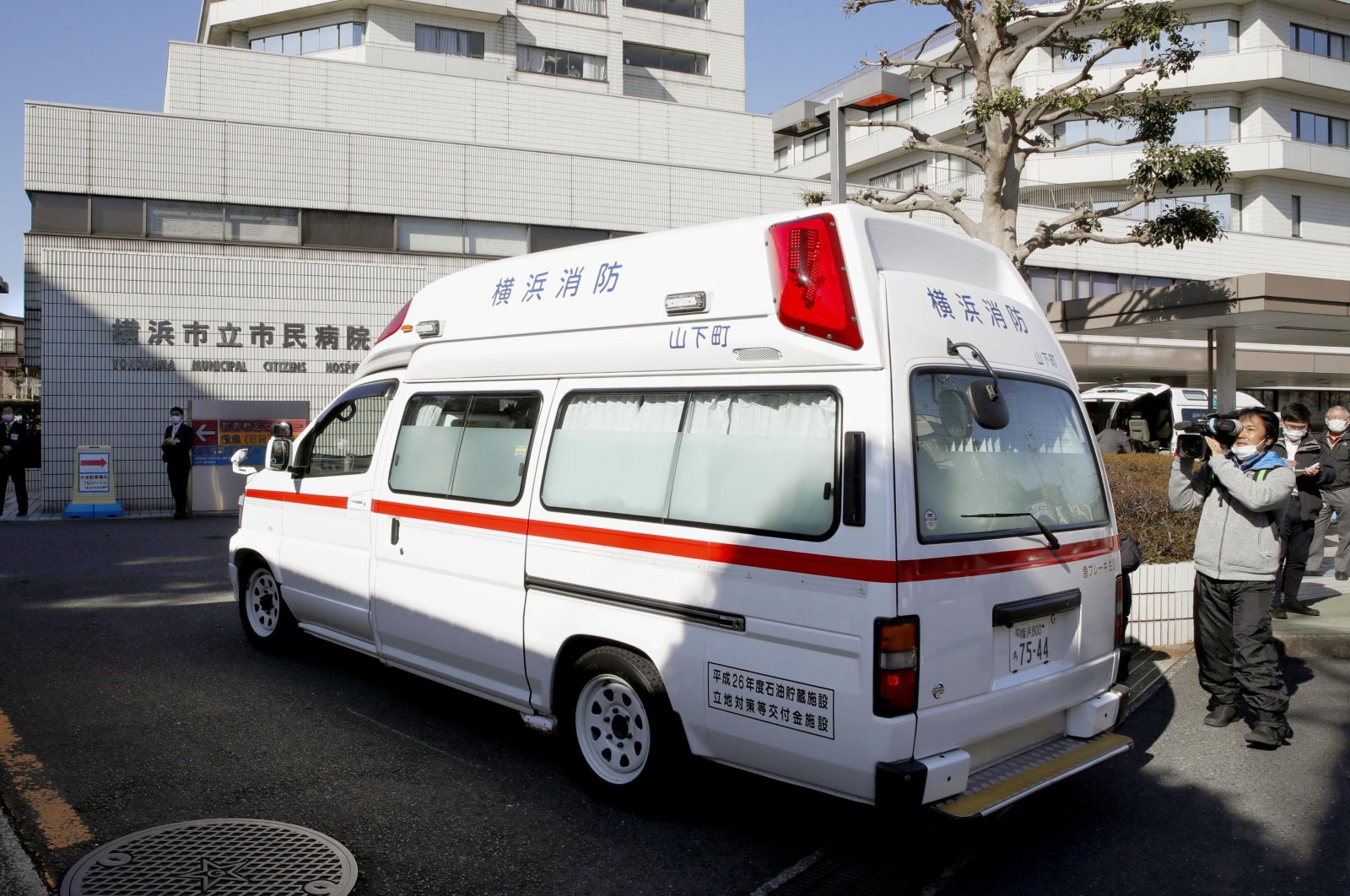 In this Feb. 5, 2020, photo, an ambulance carrying a passenger onboard cruise ship Diamond Princess arrives at a hospital in Yokohama, near Tokyo. (Kyodo News via AP)
by Associated Press
Apr 18, 2020 10:58 am

Japan on Saturday reported 556 new cases of the coronavirus, surpassing a total of 10,000 about three months after the first case was detected in the country.

Nearly one-third of domestic cases have come from Tokyo, where the daily surge has overburdened hospitals, triggering fears that the medical system will collapse.

Prime Minister Shinzo Abe this week expanded his April 7 state of emergency in Tokyo and six urban prefectures to cover all of Japan.

In a news conference Friday, Abe expressed concern that people were not observing social distancing. He announced a 100,000-yen ($930) cash handout to each resident as an incentive to stay at home, especially ahead of the “golden week” holidays at the end of April.

Additional government requests for non-essential businesses to close have been applied only to Tokyo and several other prefectures, and are only now starting in a few other areas. These measures carry no penalties.

Hospitals in Japan are increasingly turning away sick people as the country struggles with surging infections and an emergency medical system close to collapse.

Japan initially seemed to have controlled the outbreak by going after clusters of infections in specific places, usually enclosed spaces such as clubs, gyms and meeting venues. But the spread of virus outpaced this approach and most new cases are untraceable.

The outbreak has highlighted underlying weaknesses in Japanese medical care, which has long been praised for its high-quality insurance system and reasonable costs. Apart from a general unwillingness to embrace social distancing, experts fault government incompetence and a widespread shortage of the protective gear and equipment medical workers need to do their jobs.

Japan lacks enough hospital beds, medical workers or equipment. Forcing hospitalization of anyone with the virus, even those with mild symptoms has left hospitals overcrowded and understaffed.

The “collapse of emergency medicine” has already happened, a precursor to the overall collapse of medicine, the Japanese Association for Acute Medicine and the Japanese Society for Emergency Medicine said in a joint statement. By turning away patients, hospitals are putting an excessive burden on the limited number of advanced and critical emergency centers, the groups said.

In March, there were 931 cases of ambulances getting rejected by more than five hospitals or driving around for 20 minutes or longer to reach an emergency room, up from 700 in March last year. In the first 11 days of April, that rose to 830, the Tokyo Fire Department said. Department official Hiroshi Tanoue said the number of cases surged largely because suspected coronavirus cases require isolation until test results arrive.

Infections in a number of hospitals have forced medical workers to self-isolate at home, worsening staff shortages.

Tokyo’s new cases started to spike in late March, the day after the Tokyo Olympics was postponed for a year. Most patients are still hospitalized, pushing treatment capacity to its limits.

Japanese hospitals also lack ICUs, with only five per 100,000 people, compared to about 30 in Germany, 35 in the U.S. and 12 in Italy, said Osamu Nishida, head of the Japanese Society of Intensive Care Medicine.

Italy’s 10% mortality rate, compared to Germany’s 1%, is partly due to the shortage of ICU facilities, Nishida said. “Japan, with ICUs not even half of Italy's, is expected to face a fatality overshoot very quickly,” he said.

Japan has been limiting testing for the coronavirus mainly because of rules requiring any patients to be hospitalized. Surging infections have prompted the Health Ministry to loosen those rules and move patients with milder symptoms to hotels to free up beds for those requiring more care.

Calls for social distancing have not worked well enough in crowded cities like Tokyo, experts say, with many people still commuting to offices in crowded trains even after the prime minister declared a state of emergency.