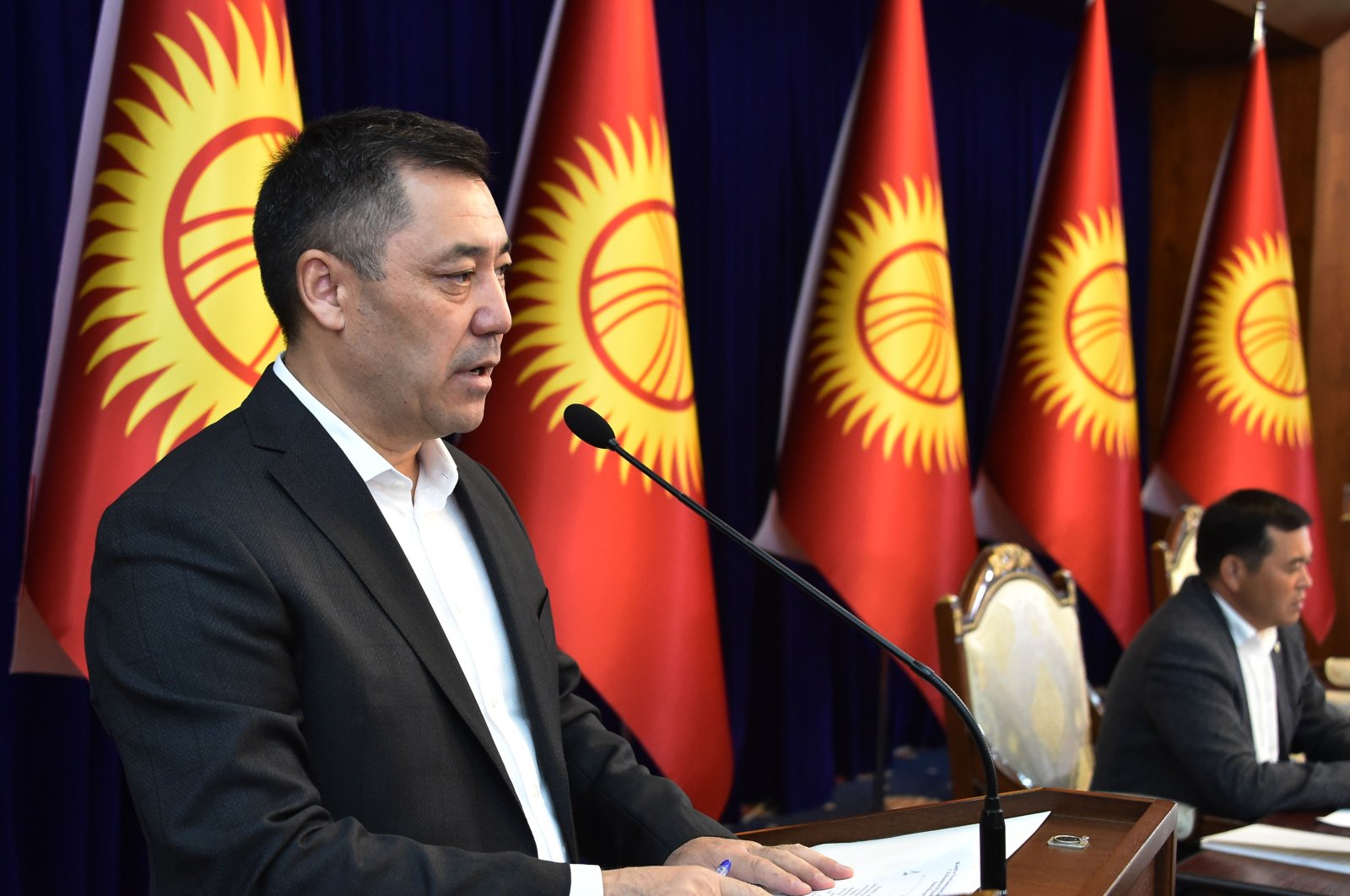 Kyrgyz Prime Minister Sadyr Zhaparov speaks at an extraordinary session of the Parliament at the Ala-Archa state residence, Bishkek, Oct. 10, 2020. (AFP Photo)
by Agencies
Oct 15, 2020 11:03 am

Under the Central Asian nation's constitution, Zhaparov must now oversee a presidential election within three months in which he himself cannot run.

Kyrgyzstan's president announced his resignation Thursday, bowing to the demands of protesters who have taken to the streets of this Central Asian nation to contest the results of a recent parliamentary election. Jeenbekov had dismissed calls he steps down just a day earlier. But in a statement released by his office Thursday, he said that he feared violence if he stayed in power, noting that protesters were facing off against police and military.

“In this case, blood will be shed, it is inevitable,” Jeenbekov’s statement said. “I don’t want to go down in history as a president who shed blood and shot at his own citizens.”

Jeenbekov's announcement was hardly a surprising turn for the country of 6.5 people on the border with China: He is the third president to be chased from power by popular uprisings since 2005.

The country was most recently plunged into chaos following an Oct. 4 vote that election officials say was swept by pro-government parties. The opposition said the election was tainted by vote-buying and other irregularities.

Protesters have taken over government buildings, looting some offices, and the Central Election Commission nullified the election. The opposition then announced plans to oust Jeenbekov and form a new government.

Jeenbekov introduced a state of emergency in Bishkek, which was endorsed Tuesday by Parliament.

Authorities deployed troops to the capital over the weekend and introduced a curfew. The move eased tensions in the city, where residents feared the violence and vandalism that accompanied previous uprisings and began forming vigilante groups to protect property. Stores and banks that were closed last week have reopened.

In an effort to stem the unrest, Jeenbekov on Wednesday endorsed the appointment of Sadyr Zhaparov, a former lawmaker who was freed from jail by demonstrators last week, as the country's new prime minister. He also approved Zhaparov's new Cabinet.

Zhaparov promised his supporters to push for Jeenbekov's resignation — but Jeenbekov continued to resist, saying he would stay in the job until the political situation in Kyrgyzstan stabilizes.

Hundreds of Zhaparov's supporters rallied in the capital Wednesday, demanding the president's resignation and threatening to storm his residence. Zhaparov promised he would meet with the president again on Thursday to talk about his resignation.

It wasn't immediately clear whether the meeting took place, but the protests continued.

As in the uprisings that ousted presidents in 2005 and 2010, the current unrest has been driven by clan rivalries that shape the country’s politics.

Jeenbekov said in his statement that the situation in Bishkek “remains tense" and that he didn't want to escalate those tensions.

“For me, peace in Kyrgyzstan, the country’s integrity, the unity of our people and the calm in the society are above all else,” Jeenbekov's statement said.

Jeenbekov has called on Zhaparov and other politicians to get their supporters off the streets of the capital and “bring peaceful life back to the people of Bishkek.”