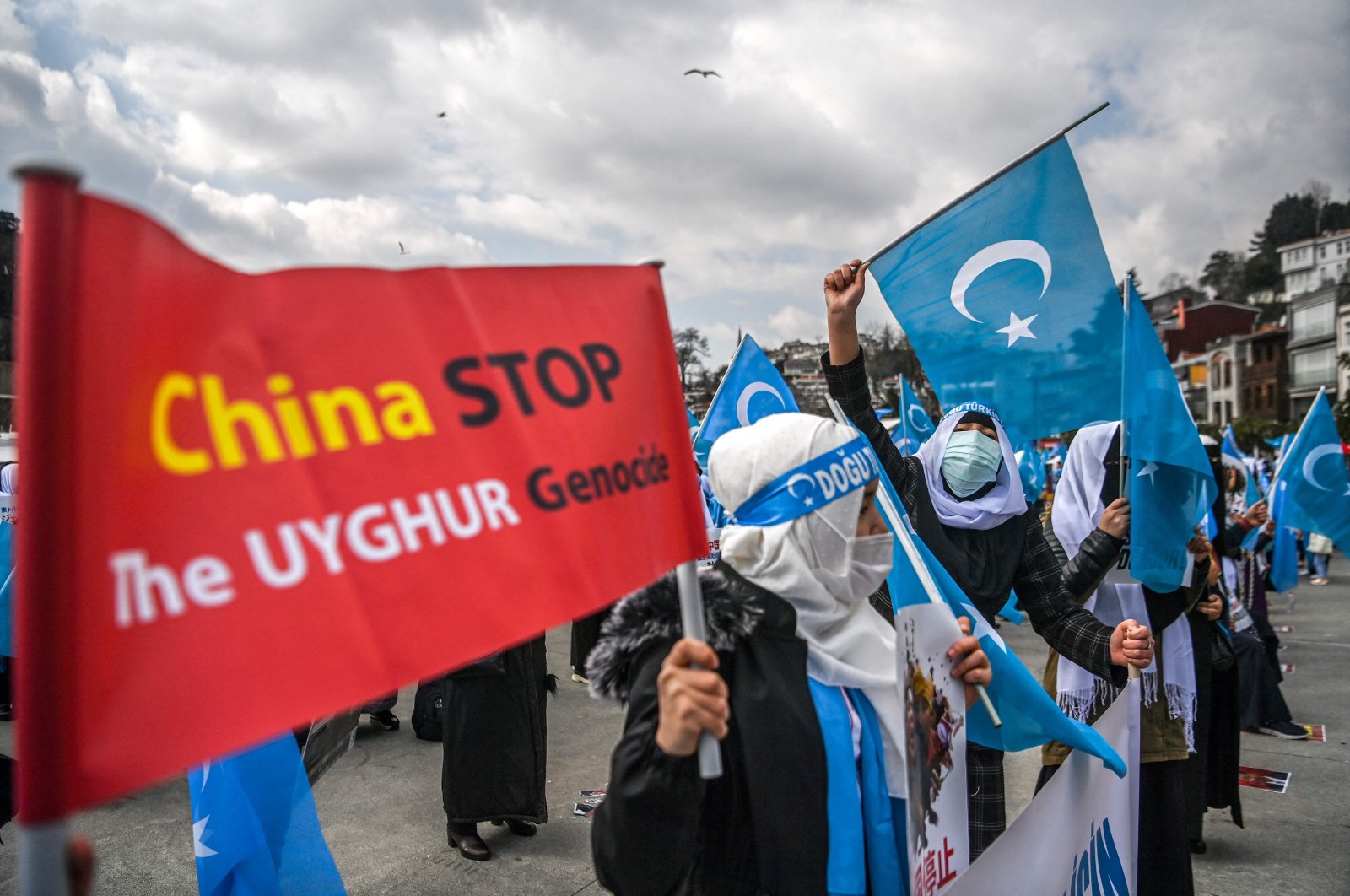 Women from the Muslim Uyghur minority hold placards and flags of East Turkestan as they demonstrate near the Chinese Consulate in Istanbul, Turkey, March 8, 2021. (AFP File Photo)
by Anadolu Agency Jul 08, 2021 8:14 pm
RECOMMENDED

British lawmakers called on the United Kingdom government on Thursday to take more responsibility to end China's discrimination and abuse of its Uyghur Muslim population.

In an online report, the Foreign Affairs Committee in Parliament set out multiple recommendations for the government to pressure Beijing to end its human rights abuses in the autonomous region of Xinjiang. Tom Tugendhat, chair of the committee and author of the report, urged Downing Street to strengthen its response with more action against the Chinese government.

"The evidence of severe human rights abuses and crimes against the Uyghur people is already overwhelming and indisputable, and Parliament has called it as genocide. This report moves the conversation forward, away from the question of whether crimes are taking place and on to what the U.K. should do to end them," Tugendhat said.

"U.K. government should recognize Parliament's decision, strengthen our response at home and urge our international partners to protect our own supply chains being used to profit from abuses. China, Britain and others were key to building the institutions to prevent a repeat of the barbarity we saw in Asia and Europe 80 years ago. Now is the time to use them," he added.

The Xinjiang region is home to around 10 million Uyghurs. The Turkic Muslim group, which makes up around 45% of Xinjiang's population, has long accused China's authorities of cultural, religious and economic discrimination.

Up to 1 million people, or about 7% of the Muslim population in Xinjiang, have been incarcerated in an expanding network of "political re-education" camps, according to U.S. officials and U.N. experts.

Both the U.S. and EU imposed sanctions on Chinese officials over the issue, with China quickly retaliating.

Beijing has denied the claims of oppression, accusing Western capitals of using the Uyghur issue as a tool to counter China's rising influence.

The U.K. should seriously consider implementing a ban on importing any products known to be produced or manufactured in Xinjiang and should extend this to all industries, said the Foreign Affairs Committee report.

It also recommended a boycott of the 2022 Winter Olympics to be held in Beijing to dissuade U.K. businesses from sponsoring or advertising the games while also discouraging tourists and fans from attending.

Banning Chinese high-tech and surveillance companies from operating in the U.K. was another point the report urged, alleging that these firms provide surveillance equipment and technology to authorities operating concentration camps in Xinjiang that hold up to over a million Uyghur Muslims.

The U.K. should exert "public and private diplomatic pressure" and build coalitions to "support the Uyghurs and other groups facing repression in Xinjiang," the report said.

With its permanent seat on the U.N. Security Council, London should push for the allowance of international and independent observers to gain access to Xinjiang to investigate, it added. Alternatively, the report recommends a U.N. investigation that would take place outside of China.

The committee also called on the government to engage in dialogue with the International Criminal Court (ICC) on the possibility and feasibility of an official investigation into crimes committed against the Uighurs, other ethnic minorities in Xinjiang and elsewhere in China.