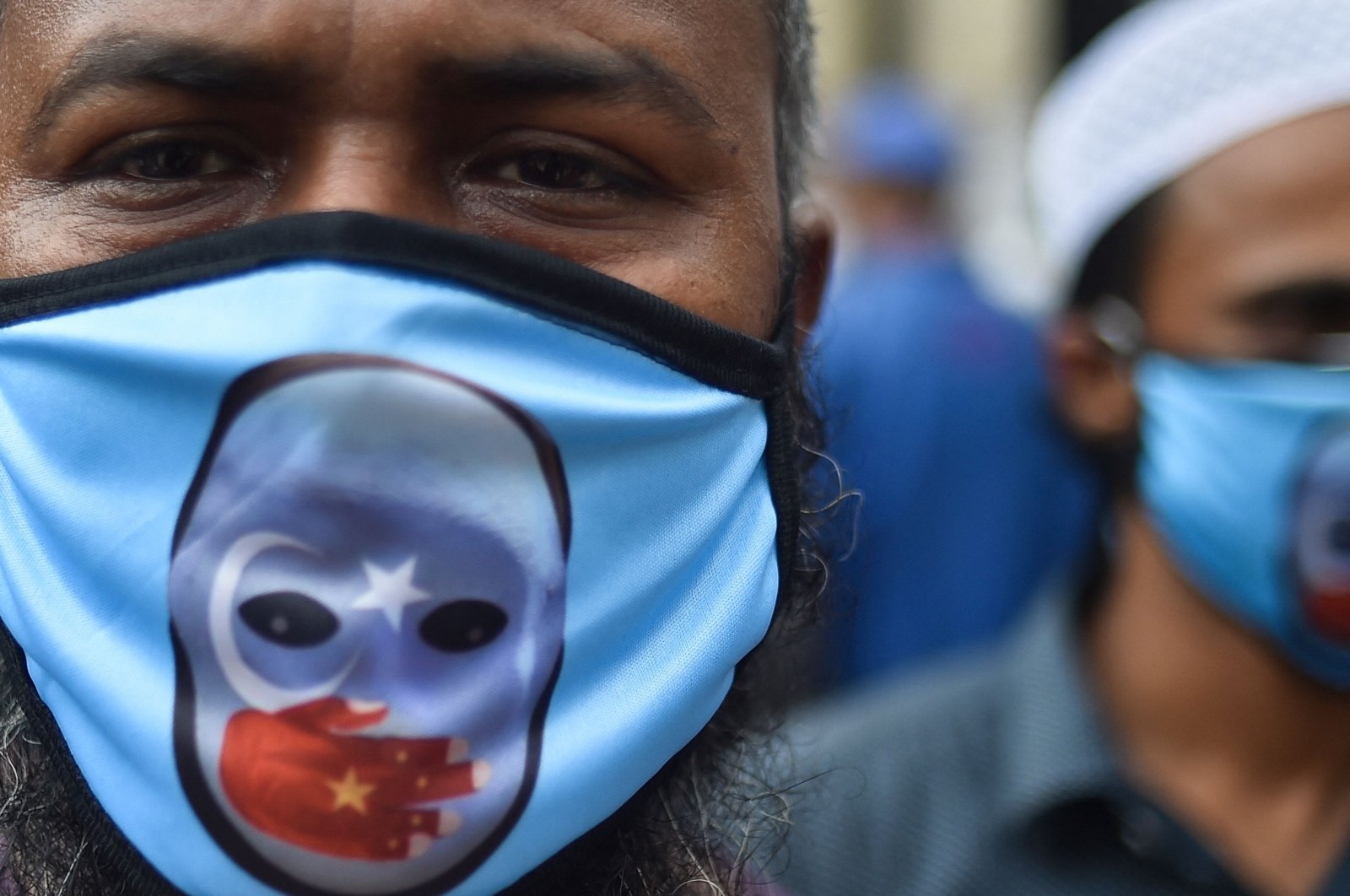 Activists from the political platform Sammilita Islami Oikya Jote stage a protest against the crackdown on Uyghurs in China and to mark the 32nd anniversary of the Tiananmen Square Massacre, in Dhaka, Bangladesh, June 4, 2021. (AFP Photo)
by DAILY SABAH Jun 11, 2021 11:06 am

China subjects Uyghurs in the western region of Xinjiang to torture, including electric shock, water and sleep deprivation, and exposure to extreme cold, Amnesty International said, calling on the world to 'end this abomination, once and for all'

China has created a “dystopian hellscape” in the western region of Xinjiang, where Muslim ethnic minorities have become the target of systematic and state-organized “mass internment and torture tantamount to crimes against humanity,” a new report by a human rights group said Thursday, citing testimonies of dozens of victims and eyewitnesses.

The report was based on testimonies of more than 50 former camp detainees. They provided the human rights group with information about the conditions and treatment of Uyghurs in internment camps that have been sanctioned by the Chinese authorities since 2017, Amnesty said. The 160-page report highlighted systematic torture and ill-treatment in the camps. According to the victims, every aspect of daily life is streamlined with the aim of forcibly implanting a secular, homogeneous Chinese nation and the ideals of the Communist Party.

“The Chinese authorities have created a dystopian hellscape on a staggering scale in the Xinjiang Uyghur Autonomous Region,” said Agnes Callamard, Amnesty International’s secretary-general and a former United Nations investigator on human rights. “Uyghurs, Kazakhs and other Muslim minorities face crimes against humanity and other serious human rights violations that threaten to erase their religious and cultural identities."

Callamard said, “It should shock the conscience of humanity that massive numbers of people have been subjected to brainwashing, torture and other degrading treatment in internment camps, while millions more live in fear amid a vast surveillance apparatus.”

Recently, China has been accused of deliberately pursuing birth control policies to reduce between 2.6 million and 4.5 million births among Muslim Uyghurs and other ethnic minorities in southern Xinjiang within 20 years. It represents up to a third of the estimated minority in the region, a new analysis by the German researcher Adrian Zenz said. According to a previously unreported cache of research produced by Chinese academics and officials, birth rates already dropped by 48.7% between 2017 and 2019 due to Beijing’s intent behind the birth control policies in Xinjiang.

China constantly pushes back all the allegations, claiming that the internment camps are vocational training centers. It justifies them by saying they are needed for countering "extremism" and "terrorism."

In addition to the Uyghurs and Kazakhs, the hate campaign also targets the Hui, Kyrgyz, Uzbek and Tajik minorities in Xinjiang. A group of lawyers has submitted new evidence to the International Criminal Court (ICC) in order to make prosecutors launch an investigation at The Hague-based court into alleged forced deportations of Uyghur Muslims into China from Tajikistan. China, which is not a member of the court, denies any involvement.

The lawyers said in a statement "that Uyghurs have been targeted, rounded up, forcibly disappeared and deported from Tajikistan" back into China's western Xinjiang region "by Chinese operatives.” They claimed that "Chinese authorities have directly intervened in Tajikistan. The ICC, therefore, has jurisdiction over these actions which start in Tajikistan and continue into China” and called on ICC prosecutors to open an investigation "without delay.”

Last July, lawyers representing the exiled Uyghur activists asked the ICC to probe the forced repatriation of thousands of Uyghurs from Cambodia and Tajikistan and the alleged genocide in Xinjiang. However, after five months ICC prosecutors said that "there was no basis to proceed at this time” with an investigation into the accusations.

Lawyers who presented the dossier Thursday say their findings are based on testimony and investigations in countries, including ICC member Tajikistan. "It is clear that the ICC does have jurisdiction to open an investigation,” the lawyers said.

The report from Amnesty emphasized the huge number of representers of Muslim minority groups who have been arbitrarily detained and imprisoned since 2017. Hundreds of thousands of people were arrested and sent to centers in addition to the U.N.'s estimated 1 million detainees, who are already in jails.

More than 50 former detainees told Amnesty that they were detained for such "crimes" as possessing a religious photograph or communicating with someone abroad. The witnesses said that many of them were subjected to intense interrogations at police stations, during which Chinese police beat them and used sleep deprivation to torture.

They were also forced to sit for up to 24 hours in so-called "tiger chairs" to immobilize them with shackles and handcuffs and keep their bodies in a painful position. One Muslim woman, who was detained for having WhatsApp messaging app on her phone, said that life in custody was strictly regulated, from the ceremony of raising the flag in the early morning to a spate of classroom sessions and night shifts to monitor other inmates.

“There was not a minute left for yourself. You are exhausted,” the woman told Amnesty.

According to the report every former detainee was subjected to torture or other ill-treatment, including electric shock, water and sleep deprivation, and exposure to extreme cold.

An elderly woman was punished for protecting her cellmate. The woman said that she was placed in a small, dark, cold room with no windows. They bound her arms and legs and forced her to sit on an iron chair for three days in a row.

Amnesty International became aware of one case in which a detainee allegedly died after being held in a "tiger chair" in front of his fellow inmates for 72 hours, during which he urinated and defecated on himself.

“China must immediately dismantle the internment camps, release the people arbitrarily detained in them and in prisons, and end the systematic attacks against Muslims in Xinjiang,” said Callamard. “The international community must speak out and act in unison to end this abomination, once and for all.”