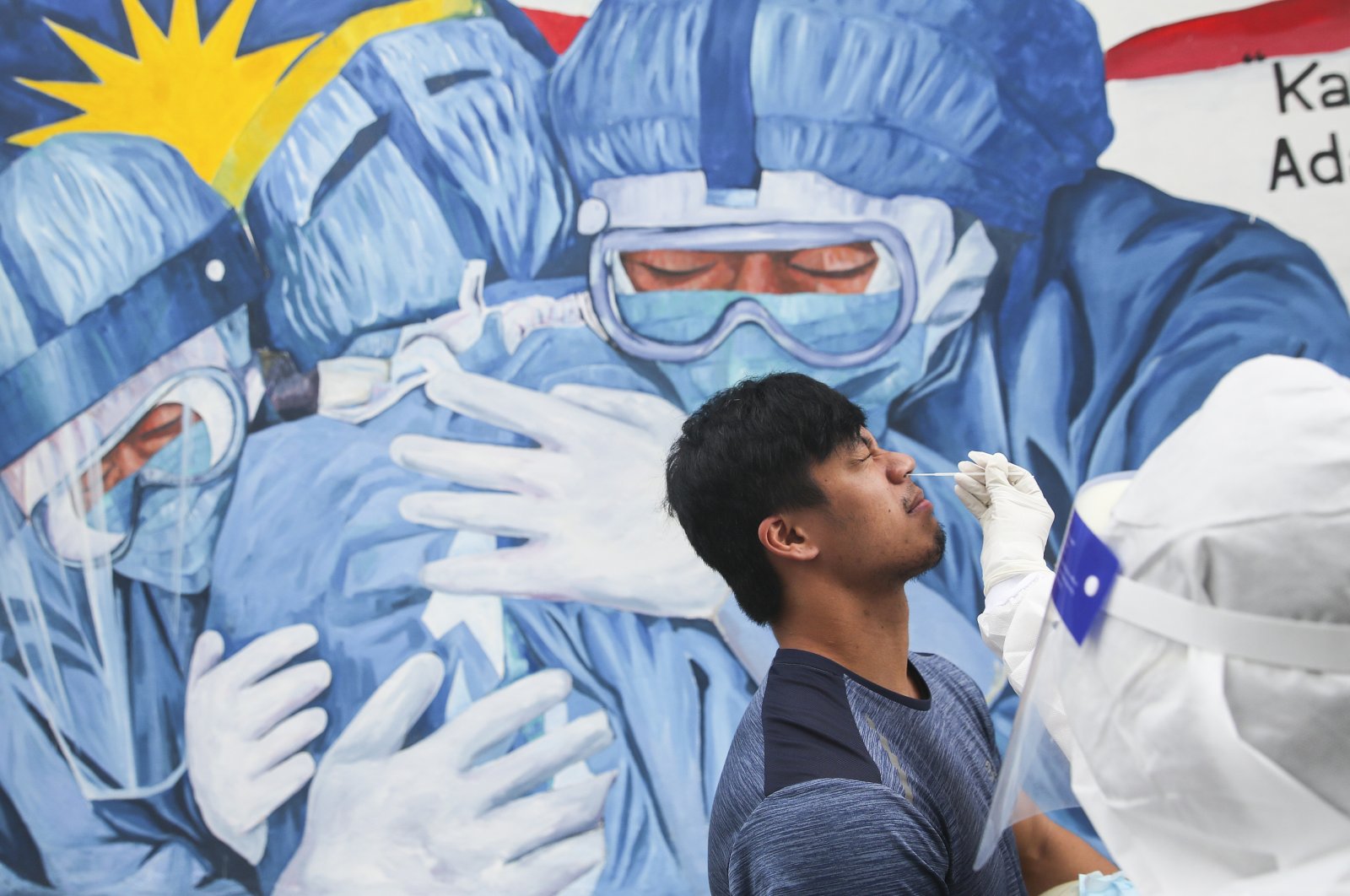 Medical personnel collects a swab sample from a man during a COVID-19 test at Ajwa clinic in Shah Alam, outside Kuala Lumpur, Malaysia, Jan. 11, 2021. (EPA-EFE Photo)
by ASSOCIATED PRESS Jan 12, 2021 10:28 am
RECOMMENDED

Malaysia's king Tuesday approved a coronavirus emergency that will suspend parliament at least until August and halt any bids to seek a general election in a political reprieve for embattled Prime Minister Muhyiddin Yassin.

Muhyiddin assured citizens in a televised speech that the emergency was "not a military coup and curfew will not be enforced." He said his civilian government will remain in charge during the emergency, which will last until Aug. 1 or earlier depending on the situation.

The emergency declaration came as a surprise just a day before millions of people in Malaysia's biggest city Kuala Lumpur, the administrative capital Putrajaya and five high-risk states return to a near-lockdown for two weeks. It also comes amid threats by the United Malays National Organization (UMNO), the largest party in the ruling coalition, to withdraw support from Muhyiddin to force an early general election.

Many in UMNO are unhappy that the party is playing second fiddle to Muhyiddin's own Malay party. Muhyiddin said the national parliament and state legislatures will be suspended and no election is allowed during the emergency. He pledged to call a general election once the crisis has eased and it is safe to hold polls.

Oh Ei Sun, a senior fellow at the Singapore Institute of International Affairs, said most people could understand the need for movement curbs but an emergency declaration appeared overblown as it is unclear how that could help slow the virus spread.

"It's very clearly a political move from the Muhyiddin side to preempt political challenges from both his rivals in his ruling coalition as well as the opposition," he said.

Malaysia last declared an emergency in 1969 after bloody racial riots that killed hundreds. The king, who can declare a state of emergency that allows the country to be governed through ordinances that cannot be challenged in court, had in October rejected Muhyiddin's request to declare an emergency.

King Sultan Abdullah Sultan Ahmad Shah said at the time that existing laws were sufficient to halt the virus spread. But in a palace statement Tuesday, the monarch said he took into account public safety and the country's best interest in giving his consent after meeting Muhyiddin late Monday.

The king said he was worried as the pandemic has risen to a critical level and at the same time, some parts of the country are struggling with floods that have displaced thousands.

Malaysia's virus cases have spiraled from just over 15,000 three months ago to 138,224, including 555 deaths, in a fresh outbreak triggered by a local election. Muhyiddin, in announcing the lockdown Monday, warned the country's health care system was at "breaking point."

He said daily COVID-19 cases, which have consistently breached 2,000 in recent weeks, could jump to 8,000 by the end of May if nothing is done.

The health ministry also said it has identified the first case of a highly contagious U.K. variant in the country. Separately, Home Minister Hamzah Zainuddin became the third Cabinet minister in days to test positive for the virus, his office said Tuesday.

Under the renewed curbs from Wednesday, social gatherings and interstate travel are banned and movement is limited within a 10-kilometer (6-mile) radius, similar to a national lockdown in March 2020. However, certain sectors in manufacturing, construction, trade and distribution, services and plantations will be allowed to operate with strict guidelines. Muhyiddin assured investors that "Malaysia is open for business."

"This period of emergency will give us much needed calm and stability, as well as enable us to focus on economic recovery and regeneration," he said.

Muhyiddin took power in March after instigating the collapse of the reformist alliance that won the 2018 elections and joined with the opposition to form a Malay-centric government. But his government is shaky with a razor-thin majority in Parliament.

Josef Benedict, a researcher with rights group CIVICUS Monitor, said the emergency appeared to be another bid by Muhyiddin to "hold on to power, block elections and to remove parliamentary oversight" rather than seriously addressing the pandemic. "A dark day for democracy," he tweeted.