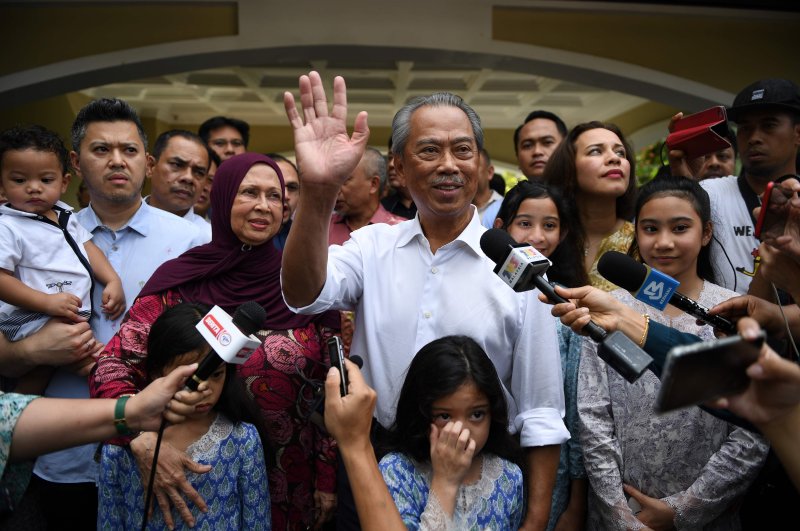 Malaysia's former interior minister Muhyiddin Yassin (C) and his family wave to the press shows outside his home in Kuala Lumpur on Feb. 29, 2020. (AFP Photo)
by Compiled from Wire Services Feb 29, 2020 11:52 am
RECOMMENDED

Malaysia's former Prime Minister Mahathir Mohamad, who resigned earlier this week, insisted Saturday he had enough support to lead the government again hours after a rival was picked for the job.

"I have 114 MPs who are supporting me," the 94-year-old said in a statement, adding that he had written a letter to the Malaysian king – who appoints the country's premier – explaining this.

A candidate is required to have the support of 112 MPs to become prime minister.

Earlier Saturday, the king appointed little-known ex-interior minister, Muhyiddin Yassin, as the country's new leader, trumping Mahathir's bid to return to power after a week of political turmoil that followed his resignation as prime minister.

The appointment of Muhyiddin, who heads Mahathir's Bersatu party, will ironically bring back to power the United Malays National Organization, which was ousted by Mahathir's alliance in a historic vote in May 2018.

Bersatu pulled out of the ruling alliance this week, leading to the government's collapse. Mahathir quit objecting to Bersatu's plan to work with UMNO. Several UMNO leaders, including disgraced ex-Prime Minister Najib Razak, are on trial on corruption charges.

Mahathir, 94, had struck a deal early Saturday to work with his former Alliance of Hope led by rival Anwar Ibrahim to thwart Muhyiddin's plan and appeared to be on the verge of a victory as more lawmakers rejoined his camp.

But the palace announced later in the day that King Sultan Abdullah Sultan Ahmad Shah believed that Muhyiddin had the support of a majority of lawmakers. Muhyiddin will be sworn in on Sunday.

The king decreed that “it was the best decision for all" and called for an end to the political turmoil, the palace statement said.

Mahathir's camp hasn't given up hope. The alliance held an emergency meeting late Saturday, with officials saying they're gathering evidence to prove to the king that Mahathir has majority support to be prime minister.

“This decision doesn't necessarily signal the end of the conflict," with many Malaysians angered by the betrayal of their vote for change in 2018, said Bridget Welsh, an honorary research associate at Malaysia's University of Nottingham. “I think increasingly there'll be more calls for ... an election."

Calls for a street rally late Saturday emerged on social media to protest “the death of democracy.”

Muhyiddin, 72, thanked his supporters and appealed to all sides to accept the king's decision.

Muhyiddin is a longtime politician who served in various ministries before being appointed as deputy prime minister when Najib took power in 2009. But Muhyiddin was sacked in 2015 after he criticized Najib’s handling of a massive corruption scandal at the 1MDB state investment fund.

He helped Mahathir in 2016 form Bersatu, which later teamed up with the Alliance of Hope with a pact that Mahathir would eventually hand over power to Anwar. Muhyiddin was the former home minister under the short-lived alliance but only took up the post months later following treatment for pancreatic cancer.

The stunning turn of events capped a week of tumult and marked the end of the Alliance of Hope, less than two years after it ousted the UMNO-led coalition that had governed Malaysia since independence in 1957 but had become entangled in a widespread corruption scandal.

The alliance initially nominated Anwar as the next prime minister but reversed Saturday to support Mahathir's candidacy to block a bid by Muhyiddin's camp to form a “backdoor" government involving “kleptocrats and traitors."

That plan has now been formalized with the king's decree after the monarch met leaders of all political parties earlier Saturday.

Following Mahathir's resignation this week, the king dissolved the Cabinet and reappointed Mahathir as an interim leader. The monarch then individually interviewed all 222 lawmakers but failed to establish a candidate with majority support.

Rather than holding a parliamentary vote to elect a prime minister, the king normally appoints a nominated candidate if he is satisfied the candidate has the majority of support.