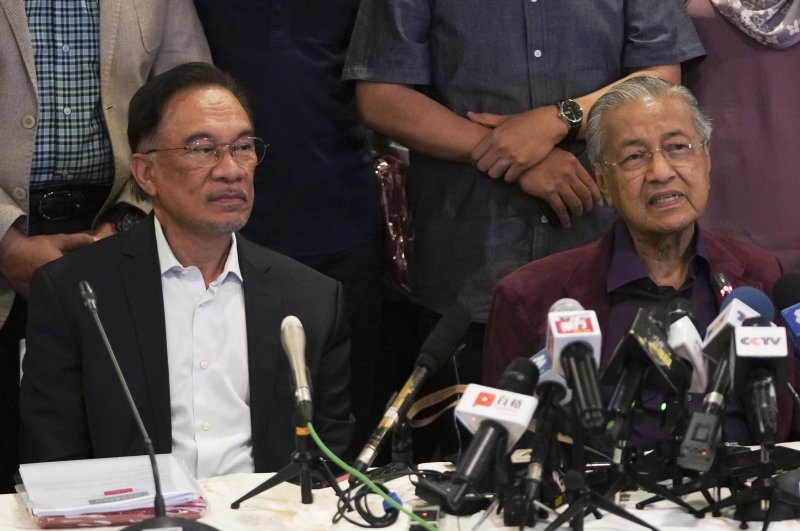 In this Feb. 22, 2020, photo, Malaysian Prime Minister Mahathir Mohamad, right, talks to media next to his successor Anwar Ibrahim in Putrajaya, Malaysia. (AP Photo)
by Compiled from Wire Services Feb 24, 2020 11:14 am
RECOMMENDED

Malaysian Prime Minister Mahathir Mohamad has submitted his resignation to the king, the prime minister's office said Monday, amid talks of forming a new coalition to govern the country.

Mahathir, 94, assumed office in May 2018 for his second stint as prime minister.

Malaysian politics was in turmoil Monday after leader-in-waiting Anwar Ibrahim denounced a "betrayal" by coalition partners he said were trying to bring down the government and stop him succeeding Mahathir.

Anwar's "Pact of Hope" alliance, which stormed to victory against a corruption-plagued government in 2018, was thrown into crisis after rivals within his coalition and opposition politicians met to reportedly try to form a new government.

Anwar and Mahathir's stormy relationship has dominated Malaysian politics for two decades but they reconciled ahead of the polls, and Mahathir has promised to hand over power to his former foe.

Anwar said late Sunday he was "shocked" at the bid to topple the ruling coalition, describing it as a "betrayal, because there has been a promise (to hand over power to me)."

He met Mahathir on Monday morning and told reporters afterwards that he was "satisfied with his stand."

"We (must) not bow down easily to the herds that want to betray the trust of the people in the last general election," he said.

Anwar — a former opposition icon who was jailed for years on widely-criticized sodomy charges — was expected later Monday to meet the king. While his role is mainly ceremonial, he must give his assent to the appointment of a new premier.