Murky skies, poor air quality in New Delhi an eternal crisis of its own making 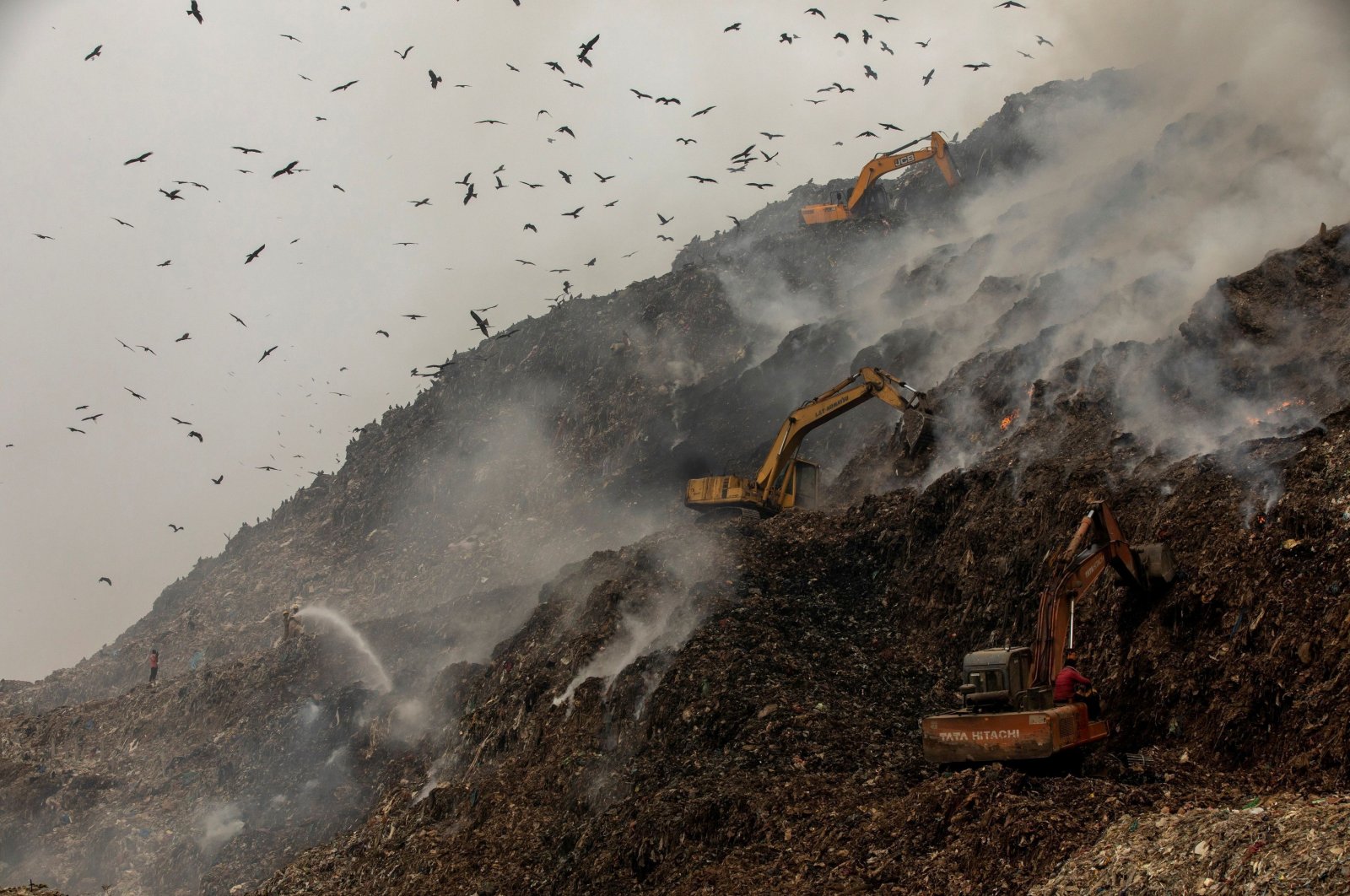 Firefighters and excavators try to douse fire as smoke billows from burning garbage at the Ghazipur landfill site in New Delhi, India, Nov. 25, 2020. (Reuters Photo)
by REUTERS Nov 26, 2020 10:46 am
RECOMMENDED

Thousands of families who live near a smoldering waste landfill in a northern corner of India’s capital have boarded up their doors and windows because they say the air outside is so toxic that they would be coughing all day.

New Delhi has the worst air of any capital on the planet, according to IQ AirVisual, a Swiss-based group that gathers air quality data globally.

Jahangirpuri is one of its most polluted parts, choking daily in the murky mix of smoke from burning rubbish, exhaust fumes from trucks coming in and out a large depot and dust rising from unmetalled roads.

“We’re dying a slow death. But we can’t think of going anywhere else because our work is here,” said daily wage worker Naresh Yadav, a 33-year-old migrant worker from poverty stricken Bihar state.

This month, as winds dropped, leaving pollutants trapped in the air, the levels of PM2.5, tiny particulate matter that is sucked deep into the lungs, have averaged 390 in Jahangirpuri – six times more than the amount deemed safe by the World Health Organization (WHO).

Delhi has blamed farmers burning crop stubble in the neighboring states for its sickly air, and the federal capital’s chief minister Arvind Kejriwal said this week it was worsening the impact of the coronavirus outbreak.

But more than half the pollutants in Delhi’s air are the result of vehicular emissions, toxic waste and smoke from the thousands of small unregulated industrial units and dust from the never-ending construction, according to a breakdown by environment groups.

“Delhi cannot build a wall to prevent polluted air coming from its surrounding states, but it has to check its own sources of pollution – be it dust, illegal industries, polluting factories, polluting vehicles or waste and biomass burning,” said Vimlendu Jha, founder of environment group Swechha.

A ban on garbage burning is routinely flouted in the teeming Jahangirpuri neighborhood, and there are illegal, small paint and dye shops operating from homes in the area polluting the air and water.

On Wednesday, in the Ghazipur area, another mountainous waste landfill site, rising to over 60 meters (197 feet), caught fire, releasing poisonous smoke into the atmosphere.

“We’re facing breathing difficulties due to the smoke coming out from the landfill site that’s been on fire since yesterday,” said Vivek Shukla, 34, a resident.

Across town, a small number of government environment officials sit in large office blocks surrounded by stacks of files and complain of being overburdened with paperwork. For a sprawling metropolis of 18 million, there are only 40 field staff to enforce environmental standards.

M. P. George, a scientist at the government’s Delhi Pollution Control Committee, told a webinar earlier this month that the capital’s air monitoring systems were superior to some other heavily polluted cities. “But staff crunch is there, no doubt,” George said.

The Delhi government has now advertised for about 60 environmental scientists to strengthen its field staff, but recruitment is typically a slow process due to bureaucracy and a lack of resources.

Critics say Delhi’s fight against pollution is ad hoc and based on quick fixes. When the air quality plummets as happened soon after the Hindu festival of Diwali earlier this month, the city administration despatched fire trucks to spray water on the streets to stop dust from flying.

Next, it hired contract workers to stand at hundreds of traffic intersections to persuade drivers to shut off their engines, saying it would help curb emissions. Few bothered.

“These measures will not solve the problem,” Jha said. “Pollution levels will start coming down only if policymakers start looking at the root causes of Delhi’s toxic air.”