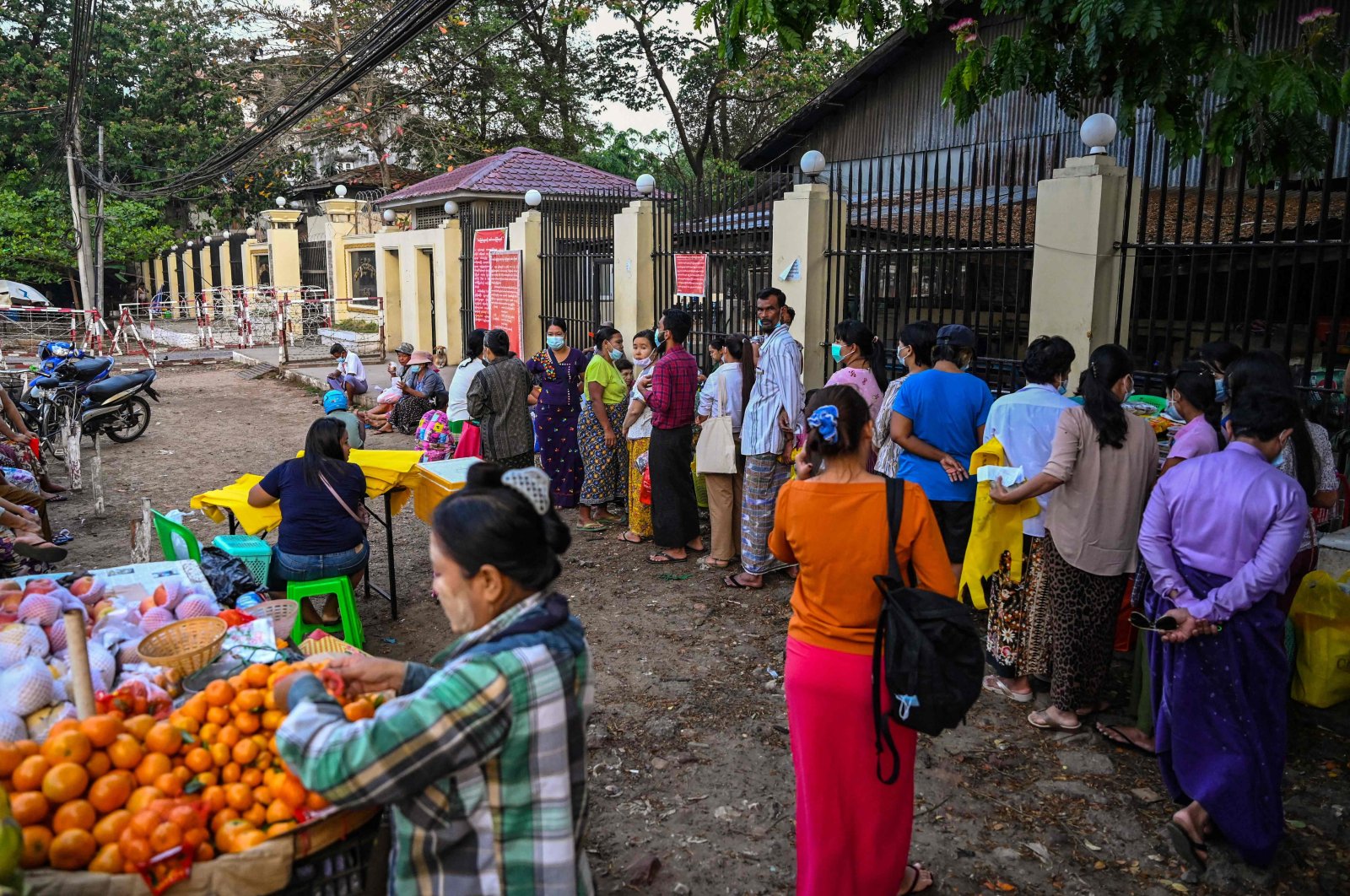 People queue in front of Insein Prison in Yangon while they wait to visit inmates ahead of the long holiday stretch for the Myanmar New Year, also known as Thingyan, as the country remains in turmoil after the February military coup, Yangon, Myanmar, April 12, 2021. (AFP Photo)
by Agencies Apr 12, 2021 12:02 pm
RECOMMENDED

Myanmar's opposition called on Monday for people to show defiance of the military with costumes and prayers for this year's new year Thingyan Festival, as the holiday will see real guns, blood on the streets and grief over a democracy robbed and more than 700 killed.

The traditional new year, known as Thingyan in Myanmar, is the most important holiday of the year and is usually celebrated with prayers, ritual cleaning of Buddha images in temples and high-spirited water throwing on the streets.

"The military council doesn't own Thingyan. The power of people is in the hands of people," Ei Thinzar Maung, a leader of the General Strike Collaboration Committee protest group, wrote on Facebook. "The people united need to hold a people's Thingyan," Ei Thinzar Maung said.

She called for Buddhists to wear certain religious attire and to recite prayers together and for members of small Christian communities to wear white and read psalms. She said followers of other religions should follow the lead of their leaders.

The holiday runs from April 13 to April 17, which is New Year's Day. Security forces have killed 706 protesters, including 46 children, since the military seized power from the elected government of Aung San Suu Kyi in a Feb. 1 coup, according to a tally by the Assistance Association for Political Prisoners (AAPP) activist group. That included 82 people killed in the town of Bago, about 70 kilometers (45 miles) northeast of Yangon, on Friday, which the AAPP called a "killing field."

There were reports on social media of shooting by the security forces in the northwestern town of Tamu on Monday and of police breaking up a protest in the city of Mandalay, as Reuters reported. Details of the violence were difficult to obtain because of the junta's curbs on broadband internet and mobile data services.

A spokesperson for the junta could not be reached for comment. The state-run Global New Light of Myanmar newspaper, in a report on the violence in Bago, said rioters armed with makeshift weapons had attacked security forces as they tried to clear protesters' barricades and one rioter was killed.

"Evidence of confiscated grenades and ammunition indicates small arms were used," said the newspaper, which has been a mouthpiece of the military for years.

Myanmar's ousted civilian leader Suu Kyi was hit with a fresh criminal charge on Monday, as the junta's tough crackdown on dissent rolls on. The generals have used increasingly brutal methods to try to quell a growing protest movement against their rule, while Suu Kyi faces a raft of criminal charges that could see her barred for life from office.

"Amay Suu has been charged again under section 25 of the natural disaster management law," lawyer Min Min Soe told Agence France-Press (AFP) after a court hearing in the capital Naypyidaw, where Suu Kyi appeared by video link. "She has been charged in six cases altogether – five charges in Naypyidaw and one in Yangon."

The most serious charge Suu Kyi faces falls under Myanmar's official secrets laws. Min Min Soe said Suu Kyi, who is under house arrest in Naypyidaw, appeared in good health, but it is not clear if she has any idea of the turmoil that has unfolded in Myanmar over the past two months.