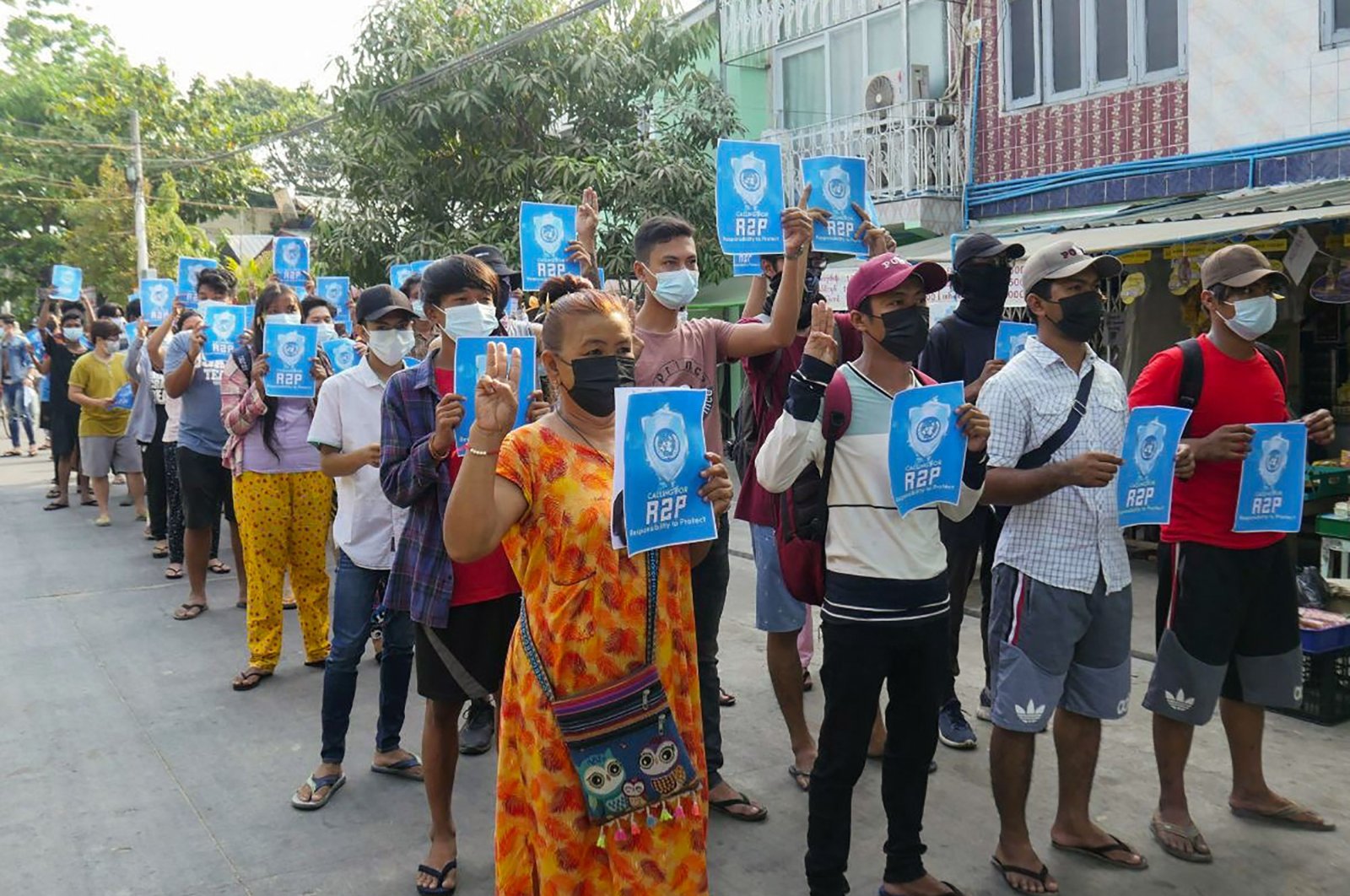 Protesters hold signs relating to "R2P," or the "Responsibility to Protect" principle that the international community should take action against a state that has failed to protect its population, in Yangon's Thaketa township, Myanmar, April 1, 2021. (AFP Photo)
by Reuters Apr 01, 2021 8:54 am
RECOMMENDED

Myanmar's ousted leader Aung San Suu Kyi has been charged with a very serious accusation by the military junta that could lead to a prison sentence of up to 14 years, her lawyer said Thursday.

Myanmar's junta has accused Suu Kyi of breaking a colonial-era official secrets law. Her chief lawyer, Khin Maung Zaw, told Reuters by telephone that Suu Kyi, three of her deposed cabinet ministers and a detained Australian economic adviser, Sean Turnell, were charged a week ago in a Yangon court under the official secrets law, adding he learned of the new charge two days ago. Earlier Suu Kyi's other lawyer Min Min Soe said that no new charges were laid against his client.

The fighting between Myanmar military and ethnic minority insurgents in frontier regions continued Thursday as a United Nations special envoy warned of the risk of a bloodbath due to intensified crackdown on anti-coup protesters while activists once took to streets to burn copies of a military-framed constitution.

At least 20 soldiers were killed and four military trucks destroyed in clashes with the Kachin Independence Army (KIA), one of Myanmar's most powerful rebel groups, DVB news reported.

Myanmar military aircraft have started bombing positions of another group, the Karen National Union (KNU), for the first time in more than 20 years and thousands of villagers have fled from their homes, many into Thailand.

Myanmar has been rocked by almost daily protests since the army overthrew Aung San Suu Kyi’s elected government on Feb. 1 citing unsubstantiated claims of fraud in a November election. Suu Kyi and other members of her National League for Democracy (NLD) are being held in detention.

In cities across Myanmar, there were further candle-lit protests overnight and marches at dawn on Thursday, according to media and photographs on social media as reported by Reuters.

Fires also broke out at two shopping centers in Yangon owned by military-controlled conglomerates overnight and early on Thursday, with photographs posted on social media showing flames and columns of smoke.

Ousted members of parliament, mostly from Suu Kyi's party, vowed to set up a federal democracy in a bid to address a long-standing demand from ethnic minority groups for autonomy.

The military rejects such proposals and sees itself as the only institution capable of holding the country together.

The lawmakers who have set up a parallel civilian government, the Committee for Representing Pyidaungsu Hluttaw (CRPH), also announced the abolishment of a 2008 constitution set up by the military that guarantees the army's influence.

"The new day begin here!" Dr. Sasa, the international envoy of the CRPH, said on Twitter, referring to what for now is a largely symbolic move.

Social media posts showed copies of the constitution, or in some cases imitations, being burned at rallies and in homes during what one activist called a "constitution bonfire ceremony".

The U.N. special envoy on Myanmar Christine Schraner Burgene told the 15-member U.N. Security Council that the military was not capable of managing the country, and warned the situation on the ground would only worsen.

The council must consider "potentially significant action" to reverse the course of events as "a bloodbath is imminent," she said.

The council's statements have so far expressed concern and condemned violence against protesters, but dropped language calling the takeover a coup and threatening possible further action due to opposition by China, Russia, India and Vietnam.

At least 536 civilians have been killed in protests, 141 of them on Saturday, the bloodiest day of the unrest, according to the Assistance Association for Political Prisoners (AAPP).

The United States on Wednesday urged China, which has significant economic and strategic interests in Myanmar, to use its influence to hold those responsible for the coup accountable.

While Western countries have strongly condemned the coup, China has been more cautious and the government's top diplomat Wang Yi called for stability during a meeting with his Singaporean counterpart on Wednesday.

"China welcomes and supports ASEAN's adherence to the principle of non-interference... and the 'ASEAN approach' in playing a positive role in promoting the stability of the situation in Myanmar," China's foreign ministry said in a statement after the meeting, referring to the Association of Southeast Asian Nations.

In a sign of stepped-up shuttle diplomacy, the foreign ministers of Malaysia, Indonesia and the Philippines are also due to meet Wang Yi in China this week.

ASEAN, of which Myanmar is a member, has a pledge not to interfere in each other's affairs, but led by Indonesia some countries have been actively pushing diplomatic efforts to defuse the crisis.

Still, the military has up to now appeared impervious to outside pressure.