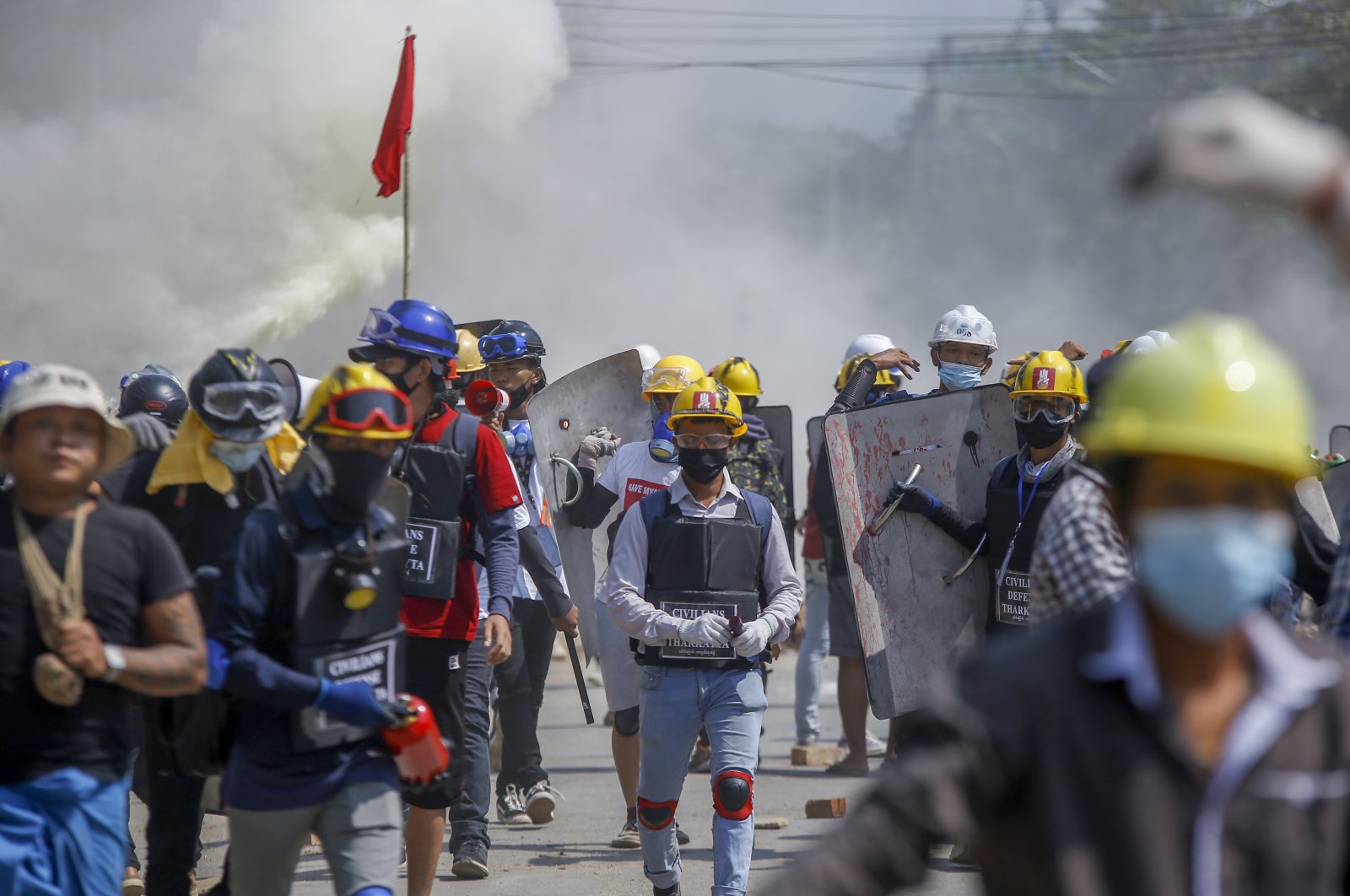 Anti-coup protesters retreat from the frontlines after discharging fire extinguishers toward a line of riot policemen in Yangon, Myanmar Wednesday, March 10, 2021. (AP Photo)
by Agencies Mar 10, 2021 10:24 am

A lobbyist recruited to represent the Myanmar junta internationally is set to pocket a $2 million fee, according to documents filed to the U.S. Justice Department, while hundreds of soldiers and police swooped in on a railway station in Yangon seeking to arrest workers on strike

Myanmar's generals have hired a lobbying firm, hoping to show the situation in the country from their perspective after security forces on Wednesday were involved in a confrontation at the headquarters of railroad workers who opposed the Feb. 1 coup and the United States urged the military to use "maximum restraint."

An Israeli-Canadian lobbyist hired by Myanmar's junta will be paid $2 million to "assist in explaining the real situation" of the army's coup to the United States and other countries, documents filed with the U.S. Justice Department show.

Ari Ben-Menashe and his firm, Dickens & Madson Canada, will represent Myanmar's military government in Washington, as well as lobby Saudi Arabia, the United Arab Emirates (UAE), Israel and Russia, and international bodies like the United Nations, according to a consultancy agreement.

The Montreal-based firm will "assist the devising and execution of policies for the beneficial development of the Republic of the Union of Myanmar, and also to assist in explaining the real situation in the Country," read the agreement, submitted on Monday to the Justice Department as part of compliance with the U.S. Foreign Agents Registration Act and published online.

"The agreement between the parties is for the payment of fees and expenses in the amount of $2,000,000.00 US to be paid by the foreign principal to the Registrant when legally permissible by controlling jurisdictions," reads the document published on the U.S. Justice Department website, according to Agence France-Presse (AFP). A spokesperson for the Myanmar military government did not answer telephone calls from Reuters seeking comment.

In a pitch that has been met with widespread skepticism, Ben-Menashe told Reuters he had been tasked with convincing the United States that Myanmar's generals wanted to move closer to the West and away from China. He said the generals wanted to resettle Rohingya Muslims who fled a 2017 military assault for which the U.N. has accused those same generals of overseeing a genocide.

"It is highly implausible that he could convince the United States of the narrative he’s proposing," said John Sifton, Asia advocacy director at Human Rights Watch (HRW).

Other documents submitted by Ben-Menashe showed the agreement was reached with the junta's defense minister, General Mya Tun Oo and that the government would pay the firm $2 million. Mya Tun Oo and other top generals have been sanctioned by the U.S. Treasury Department and the Canadian government, so the paperwork says the payment will be made "when legally permissible."

Lawyers told Reuters that Ben-Menashe could be in breach of sanctions. "To the extent that he is providing services to sanctioned parties from the United States without authorization, that would appear to be a violation of U.S. law,” said Peter Kucik, a former senior sanctions adviser at the U.S. Treasury.

The U.S. Treasury Department declined to comment. Ben-Menashe told Reuters he had received legal advice that he would need licenses from the Treasury's Office of Foreign Asset Controls (OFAC) and the Canadian government to accept the payment, but that he would not be breaking the law by lobbying for the junta.

"There's technicalities here but we'll leave it to the lawyers and OFAC to deal with it," he said, adding his lawyers were in touch with Treasury officials.

Meanwhile, Myanmar security forces early Wednesday raided a neighborhood in the country's largest city that is home to state railway workers who have gone on strike to protest last month's military coup.

Police sealed off the Mingalar Taung Nyunt neighborhood in Yangon where the Ma Hlwa Kone train station and housing for railway workers are located. Photos and video on social media showed officers blocking streets and what was said to be people escaping. At least three arrests were reported but it was not immediately possible to independently confirm that.

The raid comes just days after several Myanmar unions, including the Myanmar Railway Worker’s Union Federation, issued a joint call for a nationwide work stoppage. The statement said the strike would be part of a broader effort for "the full, extended shutdown of the Myanmar economy.”

Myanmar has been roiled by protests and other acts of civil disobedience since the Feb. 1 coup that toppled elected leader Aung San Suu Kyi's government just as it was to start its second term.

The coup reversed years of slow progress toward democracy in the Southeast Asian nation after five decades of military rule. Security forces have responded with mass arrests and at times lethal force. At least 60 protesters have been killed since the military takeover, according to the independent Assistance Association for Political Prisoners.

Authorities have also moved to shut down independent reporting on the situation, both through arrests of journalists the closure of media outlets. Despite the increasingly violent tactics of security forces, protests continued Wednesday in cities and towns across the country, including Yangon, Mandalay, Monywa, Dawei and Myitkyina. State railway workers were among the earliest organized supporters of the protest movement and their strike began soon after the coup.

Police last month made an effort at intimidating railway workers in Mandalay, the country’s second-biggest city, by roaming through their housing area one night, shouting and randomly firing guns. The junta now in control of the country, formally called the State Administration Council, indirectly acknowledged the effectiveness of the rail strike.

The state-run Global New Light of Myanmar newspaper in a Tuesday report on a junta meeting, cited officials as saying that rail transport between Yangon-Mandalay would resume "in the near future.”

It also acknowledged that the banking sector has been affected by the protest movement. The dawn raid on the railway workers followed another night of intimidation by police marching through residential areas in several cities after an 8 p.m. curfew, firing guns and stun grenades, and staging selective raids to arrest people.

There were more reports Tuesday of protesters dying in custody after being arrested. The latest was a school principal who died of unknown causes after being taken into custody by security forces, according to media reports and an activist who knew him. Previously, an activist with Suu Kyi’s National League for Democracy party died in custody. Witnesses said his body had wounds consistent with torture, according to New York-based Human Rights Watch. According to the Assistance Association for Political Prisoners, more than 1,930 people have been arrested in connection with the coup.

Dozens of journalists have been arrested, including Thein Zaw of The Associated Press (AP), who has been charged under a public order law that carries a penalty of up to three years in prison. Authorities continued their assault on the media on Tuesday, raiding the offices of Kamayut Media and detaining its co-founder and editor-in-chief.

The military also raided the offices of Mizzima, an online news service. No one was arrested in the latter raid, though equipment was vandalized and property was taken away. The military government on Monday announced that the licenses of five local media outlets - Mizzima, DVB, Khit Thit Media, Myanmar Now and 7Day News - had been canceled. All five had been offering extensive coverage of the protests.