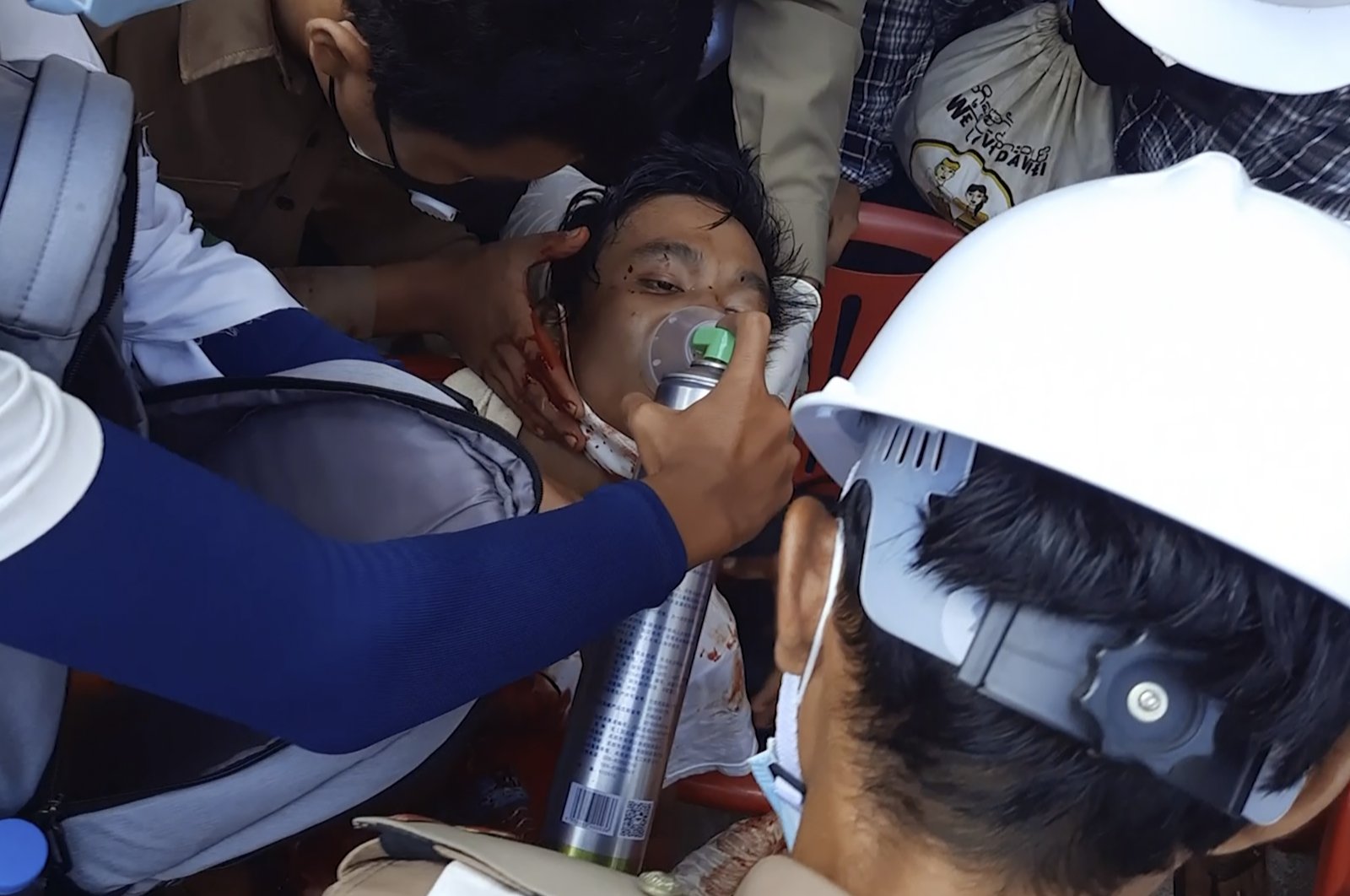 In this Sunday, Feb. 28, 2021 image from video provided by Dakkhina Insight, medics attend to a man who appeared to be wounded in his upper chest on a street in Dawei, Myanmar. (AP Photo)
by ASSOCIATED PRESS
Jul 06, 2021 9:07 am

Medics and doctors are under attack as Myanmar military and police have launched a major crackdown on them – arresting and killing opponents, dubbing them enemies of the state

The clandestine clinic was under fire, and the medics inside were in tears. Hidden away in a Myanmar monastery, this safe haven had sprung up for those injured while protesting the military’s overthrow of the government. But now security forces had discovered its location. A bullet struck a young man in the throat as he defended the door, and the medical staff tried frantically to stop the bleeding.

In Myanmar, the military has declared war on health care – on doctors themselves, who were early and fierce opponents of the takeover in February. Security forces are arresting, attacking and killing medical workers, calling them enemies of the state. With medics driven underground amid a global pandemic, the country’s already fragile healthcare system is crumbling.

"The junta is purposely targeting the whole healthcare system as a weapon of war,” says one Yangon doctor on the run for months, whose colleagues at an underground clinic were arrested during a raid. "We believe that treating patients, doing our humanitarian job, is a moral job ... I didn’t think that it would be accused as a crime.”

Inside the clinic, the young man shot in the throat was fading. A minute later, he was dead. One of the clinic’s medical students, whose name like those of several medics has been withheld to protect her from retaliation, began to cry. She had never seen anyone shot. Now she too was at risk. Protesters smashed a window so the medics could escape.

"I cry every day from that day,” the medical student says.

The suffering caused by the military’s takeover of this nation of 54 million has been relentless. Security forces have killed at least 890 people, including a 6-year-old girl they shot in the stomach, according to the Assistance Association for Political Prisoners (AAPP), which monitors arrests and deaths in Myanmar.

Around 5,100 people are in detention and thousands have been forcibly disappeared. The military, known as the Tatmadaw, and police have returned mutilated corpses to families as tools of terror. Amid all the atrocities, the military’s attacks on medics, among the most revered professions in Myanmar, have sparked particular outrage.

Myanmar is now one of the most dangerous places on earth for healthcare workers, with 240 attacks this year – nearly half of the 508 globally tracked by the World Health Organization (WHO). That’s by far the highest of any country.

"This is a group of folks who are standing up for what’s right and standing up against decades of human rights abuses in Myanmar,” says Raha Wala, advocacy director of the U.S.-based Physicians for Human Rights. "The Tatmadaw is hell-bent on using any means necessary to quash their fundamental rights and freedoms.”

The military has issued arrest warrants for 400 doctors and 180 nurses. They are charged with supporting and taking part in the "civil disobedience” movement. At least 157 healthcare workers have been arrested, 32 wounded and 12 killed since Feb. 1, according to Insecurity Insight, which analyzes conflicts around the globe.

Myanmar’s medics and their advocates argue these assaults violate international law, which makes it illegal to attack health workers and patients or deny them care based on their political affiliations.

"In other country’s protests, the medics are safe. They are exempt. Here, there are no exemptions,” says Dr. Nay Lin Tun, a general practitioner who has been on the run since February, and now provides care covertly.

Medics are targeted by the military because they are highly respected and well-organized. Days after the military ousted democratically elected leaders, including Nobel Peace Prize laureate Aung San Suu Kyi, from power, medics walked off their jobs on military-owned facilities.

The military responded by beating medical workers and stealing supplies. Security forces have occupied at least 51 hospitals since the takeover, according to Insecurity Insight, Physicians for Human Rights and the Johns Hopkins Center for Public Health and Human Rights. The military has accused doctors of genocide for not treating patients – despite itself being accused of genocide against the country’s Rohingya Muslim minority.

A military spokesperson responded to questions from The Associated Press (AP) only by sending an article that blamed supposed election fraud for the country’s problems. Suu Kyi’s party won the November election in a landslide, and independent poll watchers have largely found it free of significant issues.

The crackdown on health care is hitting a vulnerable system at a critical time. Even before the takeover, Myanmar had just 6.7 physicians per 10,000 people in 2018 – significantly lower than the global average of 15.6 in 2017, according to the World Bank. Now, testing for COVID-19 has plummeted, and the vaccination program has stalled, with its former head, Dr. Htar Htar Lin, charged with high treason in June.

COVID-19 is spreading rapidly along Myanmar’s porous border with Bangladesh, India and Thailand, alarming health experts. The war on medics is taking a severe toll on those who need health care, especially the young.

Under a tarp in the jungle pounded by rain, Naing Li stared helplessly at her firstborn child, just five days old. The newborn’s breathing had grown labored, and his tiny body felt like fire. She could do nothing. Her husband was back in their village in western Myanmar, fighting advancing soldiers. There were no medics around to help.

The baby is among about 600,000 newborns who aren’t receiving essential care, putting them at risk of illness, disability and death, according to UNICEF, the U.N. children’s agency. A million children are missing routine immunizations. More than 40,000 are no longer getting malnutrition treatment.

Desperate, Naing Li risked returning home. But when she arrived, she found her husband struck in the back by shrapnel. The couple could only watch as their son slipped away. He died hours later, in his mother’s arms. This is what haunts the country’s caretakers of the sick and wounded: The people they could have saved, if only they had not been under attack.