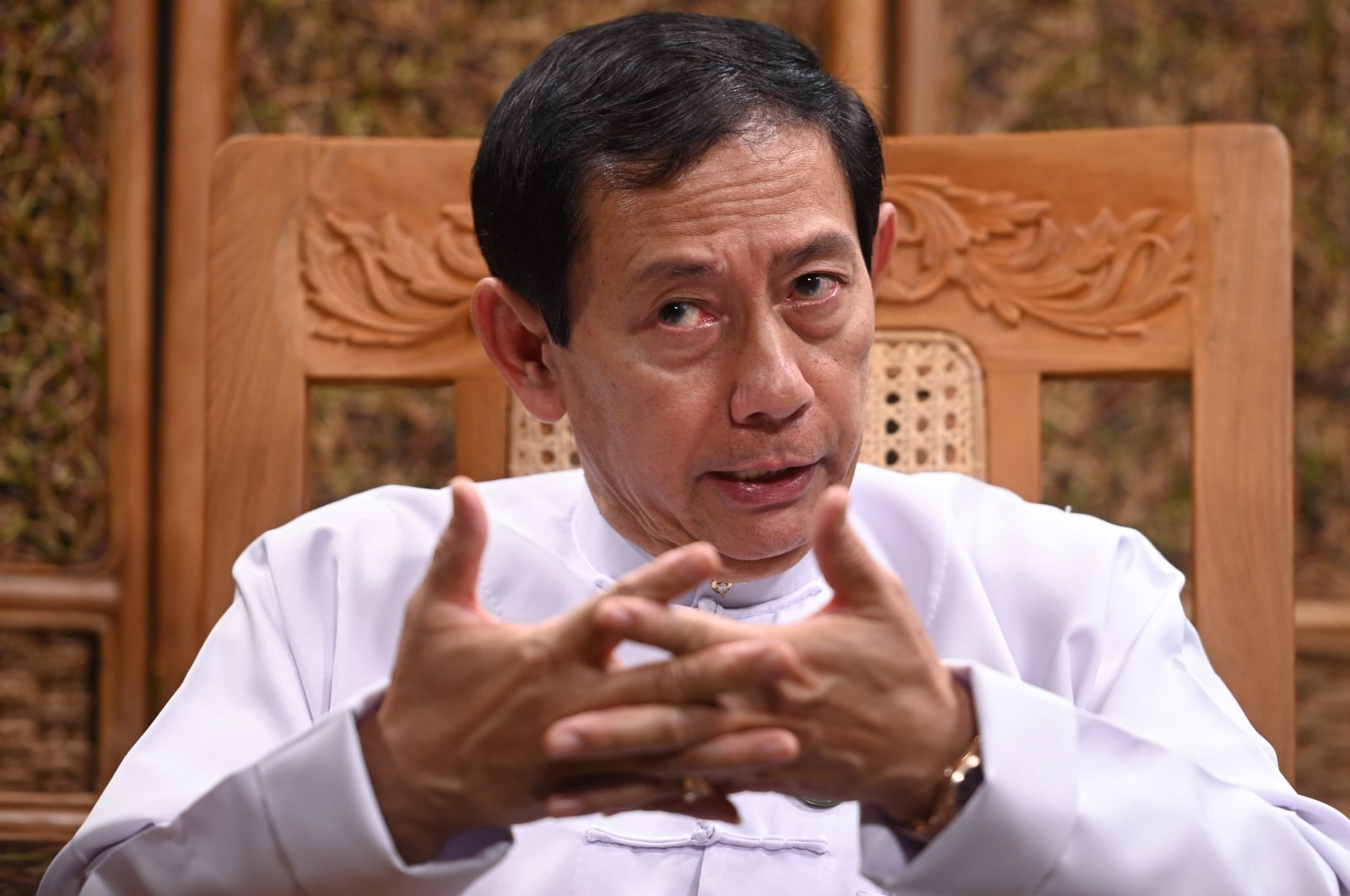 Chairman of the Union Solidarity and Development Party (USDP) Than Htay speaks to journalists during an interview at their headquarters in Naypyidaw, Aug. 27, 2020. (AFP Photo)
by Agencies
Nov 05, 2020 11:39 am

As Nobel Peace Prize winner and Myanmar's leader Aung San Suu Kyi is vilified internationally for denying genocide against the Rohingya, and now her opponents in Sunday's election are also ramping up the rhetoric against the Muslim minority.

There was global revulsion at the military-backed operations in 2017 that saw hundreds of thousands of people flee burning villages into the squalor of refugee camps in neighboring Bangladesh.

The horrifying violence – including widespread reports of murder and rape – has left Suu Kyi's international reputation in tatters and sees Myanmar facing genocide charges at the United Nation's top court.

But Than Htay, leader of the military-aligned Union Solidarity and Development Party (USDP), insists Myanmar has nothing to be sorry for.

"I cannot accept useless people in our country," Than Htay told Agence France-Presse (AFP) of the stateless Rohingya Muslims.

The USDP is the main opposition group standing against Suu Kyi's ruling National League for Democracy (NLD) party in this week's polls, Myanmar's second after emerging from outright military rule in 2011.

Than Htay told a campaign rally he was free of "Muslim or Chinese" blood, while his deputy slurred an NLD Muslim candidate, according to local news site, Myanmar Now.

USDP supporters even created a parody of an NLD anthem, claiming Suu Kyi's party had welcomed "Bengali Muslims as if they were gods."

Stripped of citizenship and rights over decades, the Rohingya are widely referred to in Myanmar by the pejorative term "Bengali," implying they are illegal immigrants from neighboring Bangladesh.

"There is no danger for political parties to speak out against either the Rohingya or Muslims in general," he said, highlighting that just 4% of Myanmar's 55-million population are Muslim.

They have no mainstream political representation and are often discriminated against in schools or when applying for ID cards or jobs.

The brutal ejection of the Rohingya in 2017 was seen very differently inside the country, where the government maintains the military was simply rooting out Rohingya insurgents and did not force the community to flee.

"They left happily," Than Htay told AFP in an interview in late August at the USDP's opulent headquarters in the capital, Naypyidaw.

"If they'd been running from the military, they wouldn't have prepared their bags as if going on a picnic."

Suu Kyi's NLD party – born out of the pro-democracy movement under the former junta – is widely expected to be returned to office in Sunday's polls.

The nation only emerged from outright military rule a decade ago and the armed forces still wield enormous power, retaining control of a quarter of parliamentary seats and three key ministries.

Stacked with former army officers, the USDP is now trying to downplay its links to the military in a country still deeply suspicious of the institution.

Than Htay, who attained the rank of Major General before retiring, insisted: "I'm a civilian now," although conceded army chief Min Aung Hlaing was an old childhood friend.

"We were commanders at the same military command. Our families are close. But that's all. We have boundaries between us."

The USDP ruled Myanmar after a hugely flawed election in 2010, boycotted by the NLD and other parties.

In 2015, the party won 28% of the popular vote, although the country's electoral system meant this translated as only 8% of electable seats.

Than Htay underlined to AFP what he saw as the NLD government's economic failures during its five-year term – a drop in GDP, more debt and an increase in living costs.

But the USDP has "failed to rebrand itself," concluded watchdog International Crisis Group.

Analyst Khin Zaw Win warned a "tacit" alliance between the military and NLD could even make the USDP redundant.

"If this develops, the military will have no further use for the USDP," he said. "The party runs the risk of losing its main prop."

According to Amnesty International, the offensive forced more than 750,000 Rohingya, mostly women and children, to flee Myanmar and cross into Bangladesh, pushing the number of Rohingya refugees in Bangladesh to over 1.2 million.

The United Nations Refugee Agency (UNHCR) has appealed for more than $1 billion this year to meet the humanitarian needs of the Rohingya refugees, 860,000 of whom are living in sprawling camps across the Cox’s Bazar district in southeastern Bangladesh, having fled across the border from Myanmar.

In a statement announcing the conference, it said it had received less than half that amount so far. The COVID-19 pandemic has worsened living conditions, made access to services even more challenging, increased the risk of sexual and gender-based violence and exacerbated the risk of infectious diseases for displaced Rohingya.