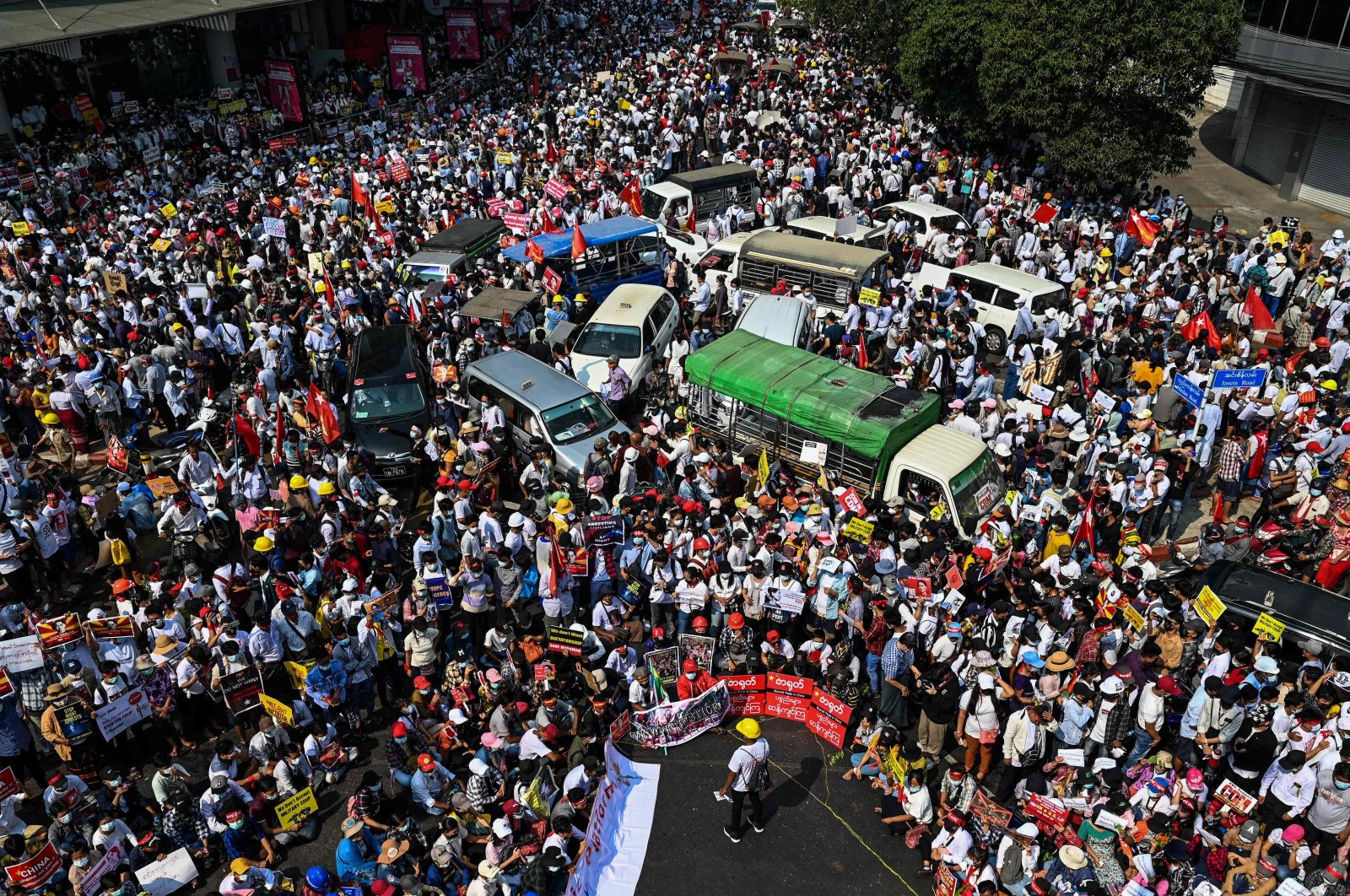 Protesters mass around vehicles as they block roads during a demonstration against the military coup in Yangon on Feb. 22, 2021. (AFP Photo)
by ASSOCIATED PRESS Feb 23, 2021 10:18 am
RECOMMENDED

Protesters against the military’s seizure of power in Myanmar were back on the streets of the country’s biggest city on Tuesday, a day after a call for a general strike shuttered shops and brought huge numbers out to demonstrate.

Numbers were down from Monday’s massive crowds, but around 1,000 people in Yangon had gathered by mid-morning at the city’s Hledan Center, a major meeting point for protesters, with other groups assembling at other venues. In Mandalay, the country’s second-biggest city, a funeral was held for 37-year-old Thet Naing Win, one of two protesters shot dead by security forces on Saturday. He and a teenage boy were killed when police and soldiers opened fire on a crowd that had gathered to support dock workers whom the authorities were trying to force to work.

They have been on strike, as have many civil servants and state enterprise workers, as part of a nationwide civil obedience movement against the Feb. 1 military takeover. The military says it took power because last November’s election was marked by widespread voting irregularities, an assertion that was refuted by the state election commission, whose members have since been replaced by the ruling junta.

Aung San Suu Kyi's National League for Democracy party won a landslide victory at the polls, which would have installed her government for a second five-year term in power. However, the army blocked Parliament from convening and detained Suu Kyi and President Win Myint and other top members of her government.

The junta has said it will rule for a year under a state of emergency and then hold fresh elections. There was a flurry of diplomatic activity abroad on Monday, as international concern about the situation remained high.

The United States and several Western governments have called for the junta to refrain from violence, release detainees and restore Suu Kyi's government. On Monday, the U.S. said it was imposing sanctions against more junta members because of the killings of peaceful protesters by security forces.

Lt. Gen. Moe Myint Tun and Gen. Maung Maung Kyaw add to other military leaders and entities facing U.S. sanctions, and Britain and Canada have taken similar action since the coup. U.S. Secretary of State Antony Blinken said in a statement that the U.S. condemns the attacks on protesters, and vowed to take further action if more violence occurs.

"We call on the military and police to cease all attacks on peaceful protesters, immediately release all those unjustly detained, stop attacks on and intimidation of journalists and activists, and restore the democratically elected government," Blinken said.

European Union foreign ministers ordered a series of measures to be drawn up to target those responsible for the coup. They said the EU is ready "to adopt restrictive measures targeting those directly responsible" for the coup.

They plan to keep all other options "under review."

Such sanctions usually involve a freeze on people’s assets and a ban on them traveling to Europe. The ministers are calling for an end to the state of emergency and the release of all political prisoners.

The ministers say any sanctions the EU imposes will not be aimed at ordinary people. U.N. Secretary-General Antonio Guterres reiterated his "full support to the people of Myanmar" on the opening day of a new U.N. Human Rights Council session.

"Coups have no place in our modern world," Guterres said in a pre-recorded video for the council’s 46th regular session. At a Feb. 12 special session, the council adopted a resolution expressing deep concern over the junta’s move. Internet access in Myanmar has been blocked nightly from 1 a.m. to 9 a.m. Social media postings Tuesday morning reported more nighttime raids by police in Yangon to try to arrest people linked with the protest movement.

On Monday, the independent Assistance Association for Political Prisoners reported that 684 people have been arrested in connection with activities since the coup, with 637 still being detained.