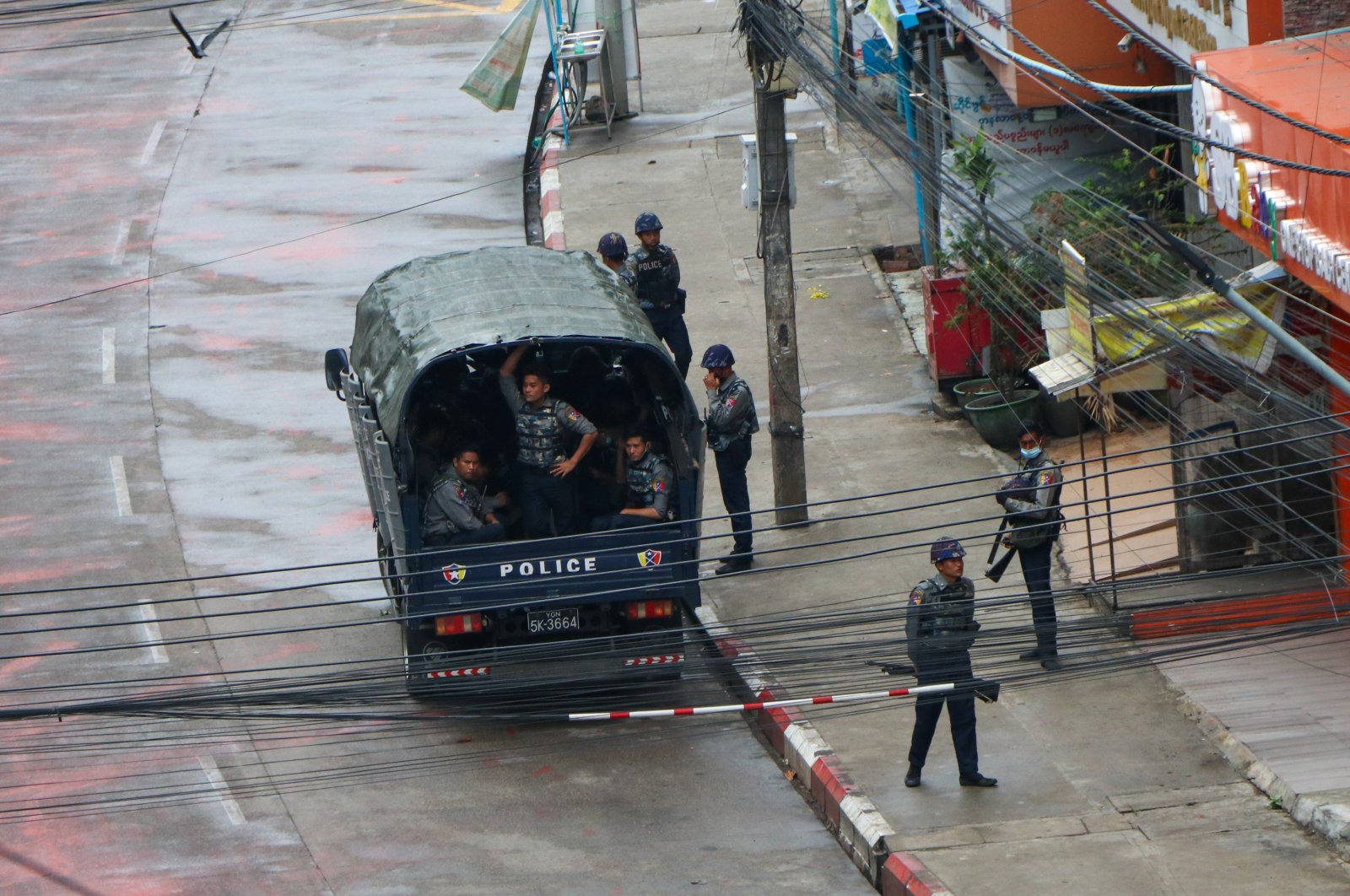 Police security forces stand by inside a police vehicle and on the sidewalk of Hledan Road in Kamayut township in Yangon, Myanmar, April 16, 2021. (AP Photo)
by Daily Sabah with DHA Apr 19, 2021 1:08 pm
RECOMMENDED

A local monitoring group in Myanmar is sounding the alarm after the military junta released images of six anti-coup demonstrators bearing severe signs of abuse and torture.

Myanmar's self-declared authorities broadcasted pictures on military-owned MRTV on Sunday evening, showing the faces of four men and two women who appeared bloodied and bruised. One of the women had a swollen jaw and a black eye.

“This junta uses torture as its policy,” the Assistance Association for Political Prisoners (AAPP) said in a tweet. “If the international community does not act, torture and death will clearly continue.”

According to AAPP's data, at least 737 people have been killed by security forces since the Feb. 1 coup when the junta detained the civilian leader Aung San Suu Kyi and members of the government and launched a crackdown on pro-democracy protesters. The group says 3,141 people, including Suu Kyi, are in detention.

“The AAPP is concerned for all those detained, particularly in undisclosed locations,” it said.

The media reports said that six detainees were arrested Sunday in Yankin, a suburb of Myanmar's largest city, Yangon, according to MRTV.

“The MRTV announcer said the six had been involved in a bombing on Saturday at 2 p.m. (7:30 a.m. GMT), outside the Yankin government office in which three government soldiers had been injured. They did not provide more information than that,” said Tony Cheng, as reported by Qatar-based news outlet Al-Jazeera.

“And we’ve seen the military government accuse people quite spuriously of crimes. We’ve also seen them use this tactic since the military coup, showing people in detention, presumably as a deterrent for those who are still going out and protesting," Cheng said, reporting from Thailand's capital of Bangkok.

The #Myanmar junta's strategy from start to finish is based on the same gambit:

"We can be more brutal than you...

We can be more shockingly hurtful and terrifying than you"

Myanmar's military granted amnesty to more than 23,000 prisoners as the country began marking its traditional new year festival on Saturday, MRTV reported, though it was unclear whether anti-coup protesters were among those set free. The junta claimed the first detainees were released in the morning, with more to follow later in the day, according to MRTV.

Myanmar celebrates its Buddhist new year holiday Thingyan in mid-April, although this year's festivities have been stained by the bloodshed and mass arrests in the wake of a military coup. It was not immediately clear whether any of the prisoners granted release included opponents of the coup staged by the military on Feb. 1.

On Saturday, people kept up demonstrations against the military regime in several regions, including the largest city of Yangon. The Irrawaddy newspaper reported at least two people died during protests Saturday morning in the town of Mogoke, north of Mandalay, after forces opened fire on civilians. Other people were reportedly hit by gunfire.

Kim Jolliffe, a civil-military researcher in Myanmar, said the military's decision to broadcast photographs of the six detainees was intended to instill fear.

“The Myanmar junta’s strategy from start to finish is based on the same gambit: ‘We can be more brutal than you. We can be more shockingly hurtful and terrifying than you,’” Jolliffe said in a tweet. “That is all they have. But it knows no bounds.”

Twitter users collected photos of the six people before and after their arrest, and some urged protesters not to back down to show their opposition to the coup.

"Photos of detained young protesters came out of #Myanmar military TV channel. I found some comparisons of before & after of their arrest on social media, compiled by the internet users," an editorial assistant at CNA Myanmar Bureau Naung Kham wrote.

Photos of detained young protesters came out of #Myanmar military TV channel. I found some comparisons of before & after of their arrest on social media, compiled by the internet users. #WhatsHappeninglnMyanmar pic.twitter.com/ow9H2k5BxK

The junta's bloody campaign against protesters has sparked wide condemnation across the world, with several members of the Association of Southeast Asian Nations (ASEAN), which Myanmar joined under a previous military government, denouncing the junta.

Leaders of Southeast Asian countries are expected to meet in the Indonesian capital next week to discuss the political crisis in Myanmar, an official source said Friday.

Indonesian President Joko Widodo called for a summit of the 10-member Association of Southeast Asian Nations (ASEAN) last month after hundreds were killed in a military crackdown. The summit is to be held in person in Jakarta on April 24, said a source close to the Indonesian president, who declined to be named.

"All 10 countries are expected to be represented," the source said, according to remarks carried by Deutsche Presse-Agentur (dpa).