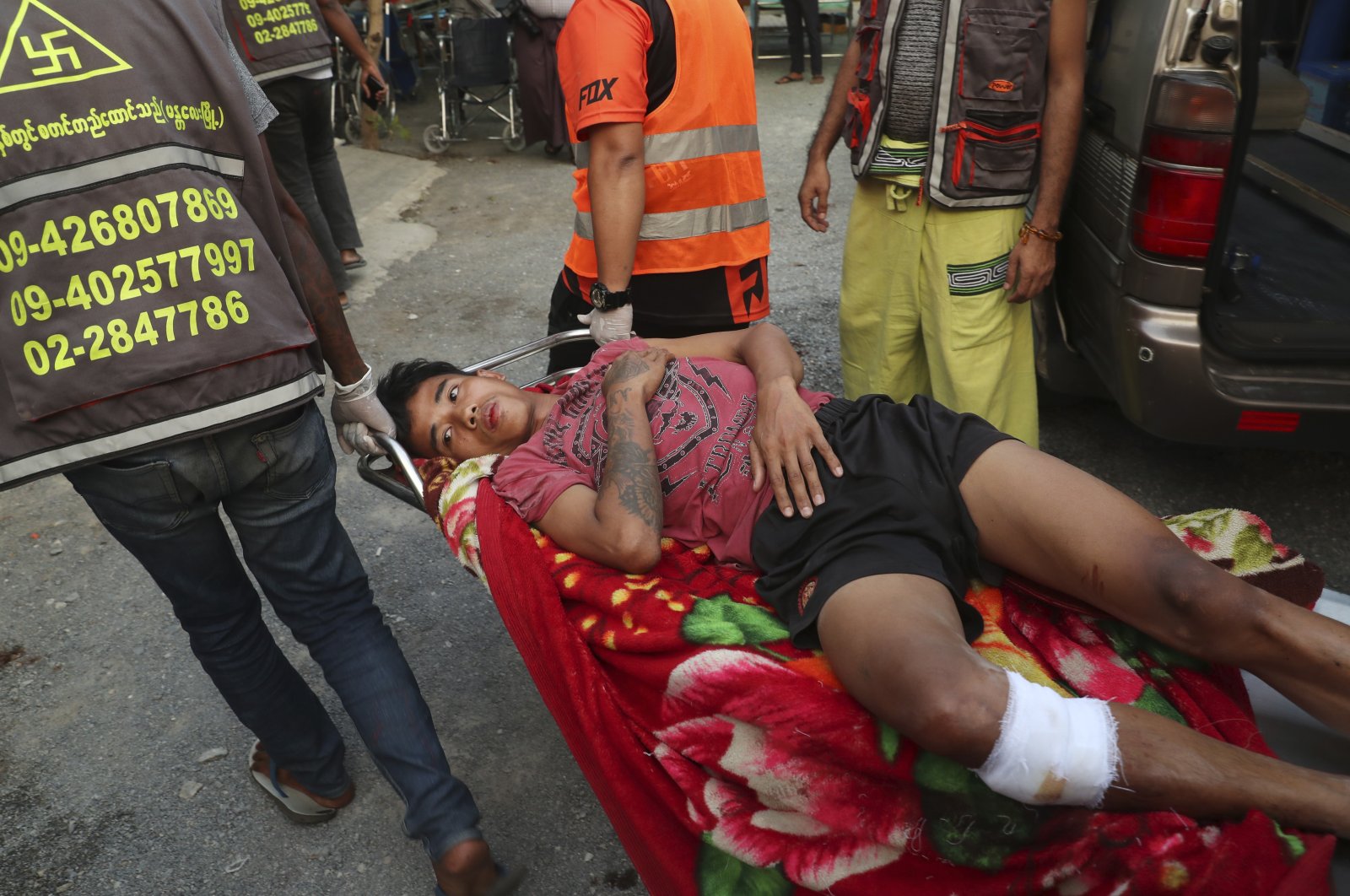 Myanmar's military has declared martial law across the country's largest city of Yangon in a bid to suppress the wide protests, as ousted leader Aung Suu Kyi's virtual court hearing was postponed due to internet problems

At least 38 people were killed Sunday and dozens were injured in one of the deadliest days of the crackdown, according to the Assistance Association for Political Prisoners (AAPP), an independent group tracking the toll of the violence. On Monday security forces fired on pro-democracy demonstrators killing two people, witnesses said.

Most of those killed – 34 – were in Yangon, where two townships, Hlaing Thar Yar and neighboring Shwepyitha were being placed under martial law.

Video from Hlaing Thar Yar township showed people running away after gunfire was heard. Those fleeing carried one injured person and tried to revive two others, one who seemed to be dead or dying, the footage from independent Democratic Voice of Burma showed.

Twenty-two civilian deaths occurred in Hlaing Thar Yar Sunday, according to the aid group, which said more than a dozen civilians were wounded and described a large number of junta forces engaged in the township.

Since the takeover six weeks ago, Myanmar has been under a nationwide state of emergency, with its civilian leaders ousted and detained and military leaders in charge of all government. But the announcement on state broadcaster MRTV late Sunday appeared to be the first use of the term martial law since the coup and suggested more direct military control of security, instead of local police.

The announcement said the State Administrative Council acted to enhance security and restore law and order and said the Yangon regional commander has been entrusted with administrative, judicial and military powers in the area under his command.

Martial law essentially supersedes all other law, allowing the military total authority over the specified area, including administrative, judicial and law enforcement functions. The imposition of martial law in six townships in Yangon in legal terms legitimizes actions that the military had already been taking to suppress the protests.

The immediate trigger appeared to be escalating violence – mostly on the part of the security forces but with increasing signs that at least some demonstrators are starting to take active self-defense measures including burning tires at makeshift barricades.

The official order issued Monday said martial law was imposed "to take more effective measures for the security, rule of law and community peace and tranquility," according to Associated Press (AP).

Violators of orders issued by the military can now be tried by military courts and could face punishments as harsh as death or life imprisonment, according to local news outlet Eleven Media. The minimum punishment, it said, was three years in prison with hard labor and a fine. Eleven Media appeared to be basing its report on times martial law was declared in 1989 and 1974. Martial law remained in place for three years after it was declared in 1989 in the wake of a failed popular uprising against a military dictatorship.

Four other deaths were reported in Bago, Mandalay and the northern city of Hpakant in Kachin state, according to the aid group and local media.

In Yangon, video posted on social media showed crowds of people, some wearing hard hats and gas masks, running down a street amid sounds of gunfire. The demonstrators quickly sprayed vapor from fire extinguishers as they retreated – a tactic widely used to smother tear gas and create a vapor screen that makes it harder for police to pursue or shoot demonstrators.

There were also reports of injuries from live rounds and rubber bullets in other parts of Yangon, including Insein district, where billows of black smoke could be seen after security forces reportedly set roadblocks on fire.

In a new tactic, anti-coup demonstrators used the cover of darkness to hold mass candlelight vigils Saturday and Sunday nights in a Yangon commercial area that was usually the scene of their daytime protests. After-dark rallies were also held in Mandalay and elsewhere.

The protest movement has been grounded in non-violent civil disobedience from the start, with marches and general strikes among its main features. But some protesters have advocated stronger, more agile methods of self-defense – such as holding small rallies that are quick to disband and reunite, and devising cover from fire extinguishers and billowing laundry.

On Saturday, the civilian leader of Myanmar’s government in hiding vowed to continue supporting a “revolution” to oust the military leaders who seized power in the Feb. 1 coup. Mahn Win Khaing Than, who was named the acting vice president by Myanmar’s ousted lawmakers and is a member of deposed leader Aung San Suu Kyi’s political party, addressed the public for the first time since the coup.

“This is the darkest moment of the nation and the moment that the dawn is close,” he said in a video posted on the shadow government’s website and social media.

“In order to form a federal democracy, which all ethnic brothers who have been suffering various kinds of oppressions from the dictatorship for decades really desired, this revolution is the chance for us to put our efforts together,” he said.

He added: “We will never give up to an unjust military, but we will carve our future together with our united power. Our mission must be accomplished.”

At the end of the message, he flashed the three-finger salute that has become a symbol of resistance to the military rulers.

The aid group’s tally of Sunday’s victims appeared to raise beyond 100 the number of civilians killed by security forces since the coup. Confirmation is nearly impossible in the country due to the security situation and a crackdown on independent media, but various groups have carefully compiled tallies with similar figures.

The actual death toll is likely higher, as police apparently seized some bodies, and some victims have had serious gunshot wounds that medical staff at makeshift clinics would be hard-pressed to treat. Many hospitals are occupied by security forces, and as a result are boycotted by medical personnel and shunned by protesters.

Police have also aggressively patrolled residential neighborhoods at night, firing into the air and setting off stun grenades as an intimidation tactic. They have also taken people from their homes in targeted raids with minimal resistance. In at least two known cases, the detainees died in custody within hours of being hauled away.

Meanwhile, Myanmar's ousted civilian leader Suu Kyi was expected to appear in court on Monday. The Yangon court hearing for Suu Kyi – who spent more than 15 years under house arrest during previous military rule – was scheduled for 10 a.m. (3:30 a.m. GMT) but the start was delayed by legal wrangling, her lawyer Khin Maung Zaw told Agence France-Presse (AFP). Shortly after that, the head of her legal team said the court in military-ruled Myanmar was unable to hold a virtual hearing on Monday because of internet problems, and the hearing has been adjourned until March 24.

Zaw also said, in a video message received by Reuters, that authorities had informed him the detained Nobel laureate was only allowed to be represented by two junior lawyers.