Nearly 40 die in bloodiest day of military's crackdown in Myanmar 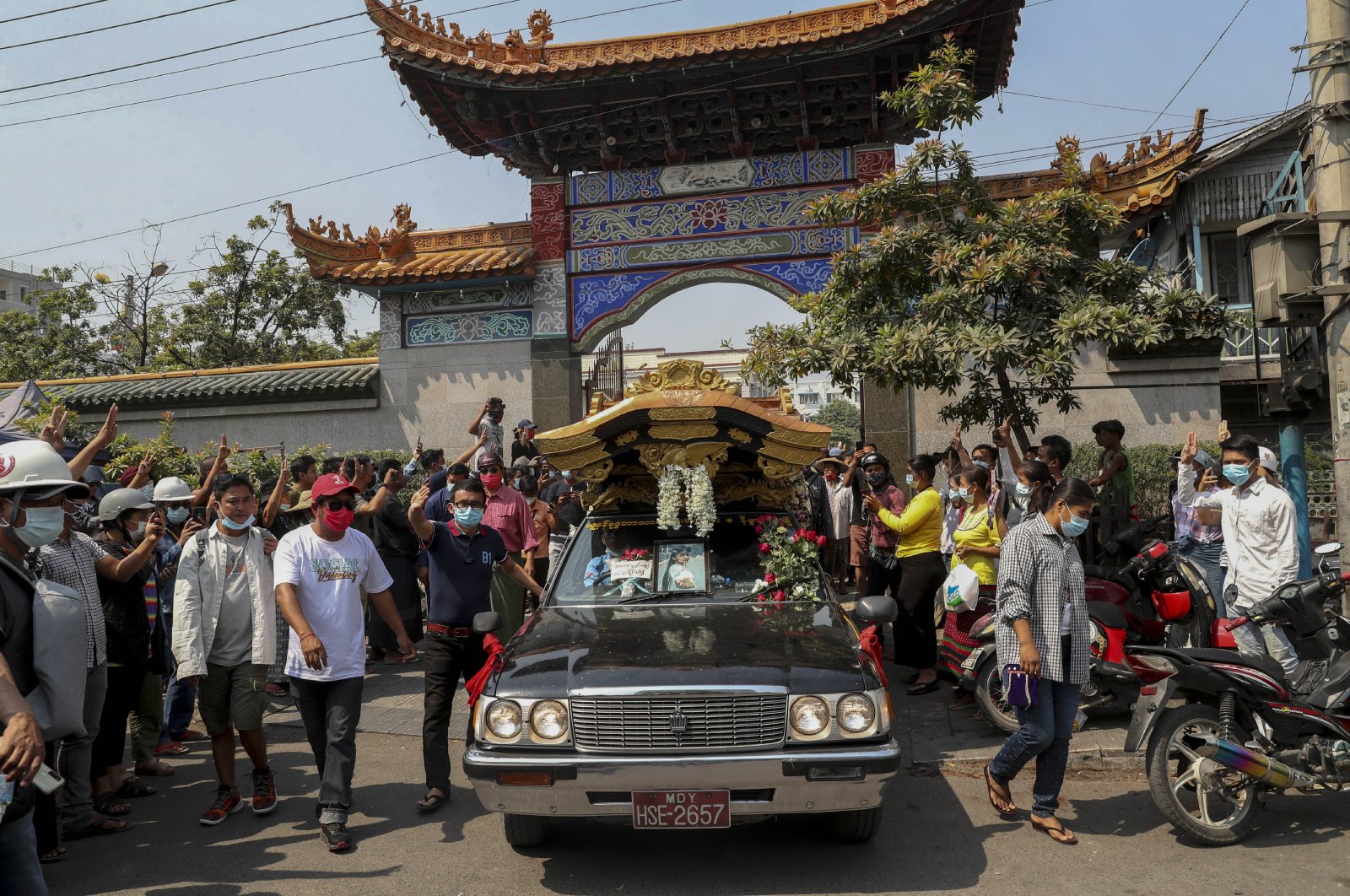 Bystanders flash a three-fingered sign of resistance as the body of Kyal Sin is driven out from a Yunnan Chinese temple in Mandalay, Myanmar, March 4, 2021. (AP Photo)
by Agencies Mar 04, 2021 11:44 am

More than 50 people have died since the Feb. 1 coup, with the United Nations saying that nearly 40 people were killed Wednesday in the escalating violence that saw security forces firing slingshots and beating an ambulance crew

Police in Myanmar broke up demonstrations in several places with tear gas and gunfire on Thursday, but there was no immediate word on casualties a day after the United Nations said 38 people had been killed in the bloodiest day since last month's coup.

A day before, Myanmar security forces were seen firing slingshots at protesters, chasing them down and even brutally beating an ambulance crew in a video showing a dramatic escalation of violence against opponents of last month’s military coup. A U.N. official speaking from Switzerland said 38 people had been killed Wednesday, a figure consistent with other reports though accounts are difficult to confirm inside the country.

The increasingly deadly violence could galvanize the international community, which has responded fitfully so far. The U.N. special envoy for Myanmar, Christine Schraner Burgener, told reporters at U.N. headquarters that Wednesday was the bloodiest day since the coup happened on Feb. 1.

"We have now more than over 50 people died since the coup started and more have been wounded," Burgener said.

Demonstrators have regularly flooded the streets of cities across the country since the military seized power and ousted the elected government of leader Aung San Suu Kyi. Their numbers have remained high even as security forces have repeatedly fired tear gas, rubber bullets and live rounds to disperse the crowds, and arrested protesters en masse. The intensifying standoff is unfortunately familiar in a country with a long history of peaceful resistance to military rule, and brutal crackdowns. The coup reversed years of slow progress toward democracy in the Southeast Asian nation after five decades of military rule.

The Democratic Voice of Burma, an independent television and online news service, also tallied 38 deaths. A toll of at least 34 was compiled by a data analyst in Yangon, Myanmar's biggest city, who spoke on condition of anonymity because he feared for his safety. He also collected information where he could on the victims’ names, ages, hometowns and where and how they were killed – an effort he said he had made to honor those who were killed for their heroic resistance.

According to the data analyst's list, most were in Yangon, where 18 died. In the central city of Monywa, which has turned out huge crowds, eight deaths were reported. Three deaths were reported in Mandalay, the country’s second-biggest city, and two in Salin, a town in the Magwe region. Mawlamyine, in the country’s southeast, and Myingyan and Kalay, both in central Myanmar, each had a single death. As part of the crackdown, security forces have also arrested hundreds of people, including journalists.

The escalation of the crackdown has led to increased diplomatic efforts to resolve Myanmar's political crisis but there appear to be few viable options. It's not yet clear if Wednesday's soaring death toll could change the dynamic. The U.N. Security Council is expected to hold a closed meeting on the situation on Friday, council diplomats said, speaking on condition of anonymity because they were not authorized to make the information public before the official announcement.

The United Kingdom requested the meeting, they said. Still, any kind of coordinated action at the United Nations will be difficult since two permanent members of the Security Council, China and Russia, would almost certainly veto it. Some countries have imposed or are considering imposing their own sanctions.

Schraner Burgener said the generals who have seized power in the Southeast Asian nation indicated they don’t fear renewed sanctions, though they are "very surprised” that their plans to restore military rule without much opposition are not working. She warned Myanmar's army that the world’s nations and the U.N. Security Council "might take huge strong measures.” Schraner Burgener said she receives some 2,000 messages per day from people inside Myanmar, many "who are really desperate to see action from the international community.”

The 10-member Association of Southeast Asian Nations (ASEAN), which includes Myanmar, issued a statement after a teleconference meeting of foreign ministers Tuesday that merely called for an end to violence and for talks on how to reach a peaceful settlement. ASEAN has a tradition of non-interference in each other's internal affairs. Ignoring that appeal, Myanmar's security forces have continued to attack peaceful protesters. In addition to the deaths, there have been reports of other violence.

In Yangon, a widely circulated video taken from a security camera showed police in the city brutally beating members of an ambulance crew – apparently after they were arrested. Police can be seen kicking the three crew members and thrashing them with rifle butts. Security forces are believed to single out medical workers for arrest and mistreatment because members of the medical profession launched the country’s civil disobedience movement to resist the junta. In Mandalay, riot police, backed by soldiers, broke up a rally and chased around 1,000 teachers and students from a street with tear gas as gunshots could be heard. Video from The Associated Press (AP) showed a squad of police firing slingshots in the apparent direction of demonstrators as they dispersed.

Meanwhile, at least 19 Myanmar police constables have crossed over to India's northeastern state of Mizoram and are seeking shelter in the country, an Indian police official said on Thursday. The three men came across the border near the town of North Vanlaiphai on Wednesday afternoon and the local authorities were assessing their health and making arrangements for them, the police superintendent in the Mizoram's Serchhip district said.