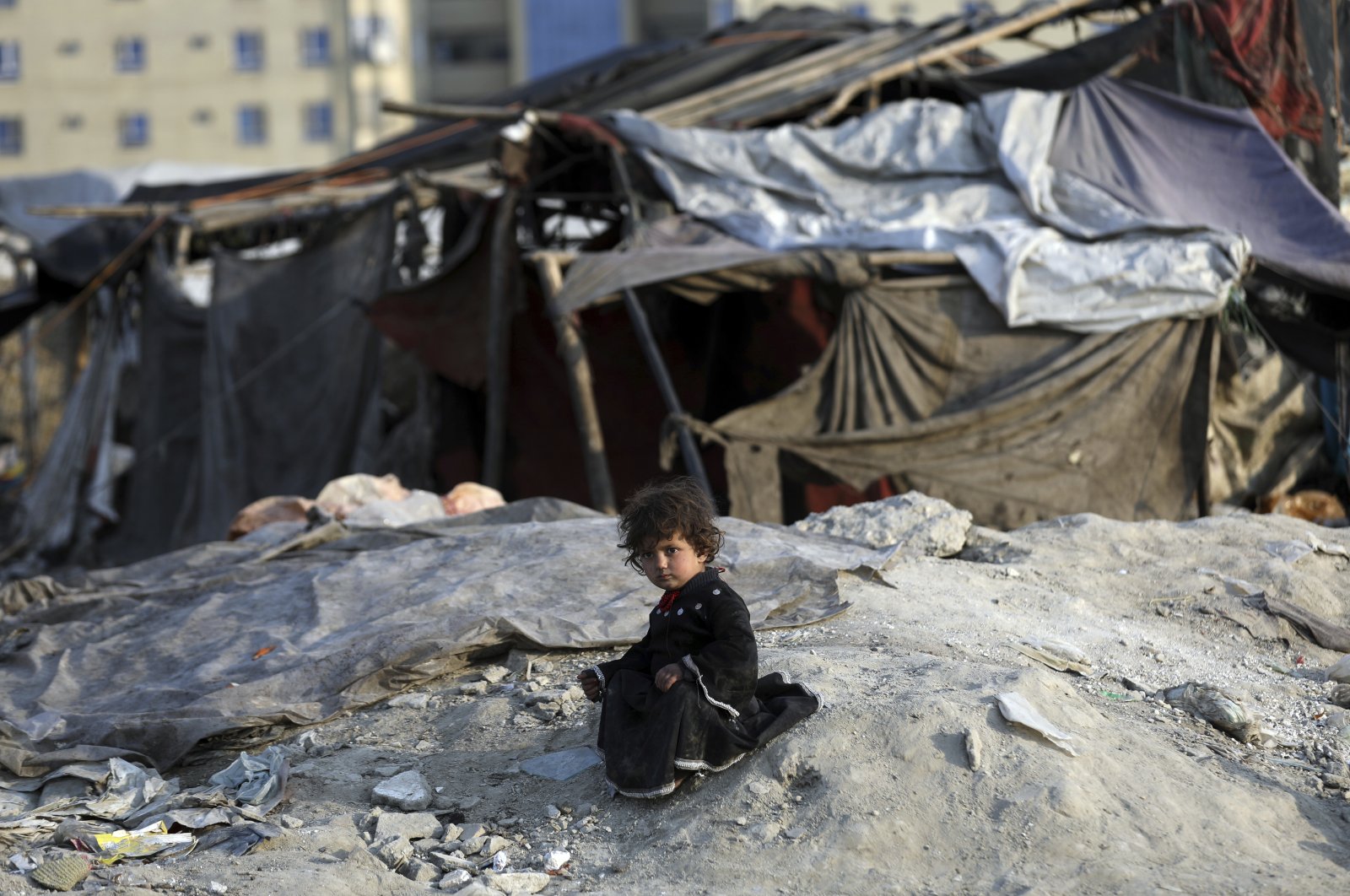 An internally displaced girl poses for a photograph outside her temporary home in the city of Kabul, Afghanistan, Jan. 18, 2021. (AP Photo)
by DAILY SABAH WITH AGENCIES Jan 19, 2021 11:57 am

Over 9.7 million children in war-torn Afghanistan are in desperate need of urgent support because of the country's crippled economy amid an almost decades-long conflict between the Afghan government and the Taliban

The international aid group Save the Children expressed alarm Tuesday, stating that Afghanistan faces a famine and urged nations to provide billions of dollars immediately to prevent the catastrophe. The aid organization said nearly 10 million children in the war-ravaged country are at risk of not having enough food to eat in 2021.

According to the new figures, over 18 million people in Afghanistan, including 9.7 million children, are desperately in need of life-saving support, including food, Save the Children said in a statement. The group called for $3 billion in donations to pay for assistance in 2021.

"Millions of people are suffering every day because of poverty and conflict. It's especially hard on children, many of whom have known nothing but violence," Chris Nyamandi, the organization's Afghanistan country director, said. "Conflict continues to cause extreme physical and psychological harm, forcing hundreds of thousands of people to flee their homes every year."

"It’s a desperately bad situation that needs urgent attention from the international community," he said.

The latest round of peace talks between the Taliban and Afghan government negotiators that began earlier this month in Qatar has been slow to produce results as concerns grow over a recent spike in violence across Afghanistan.

The pandemic has also had a disastrous impact on millions of Afghan families. In 2020, the World Bank estimated that the pandemic had hugely disrupted imports, including vital household items, which in turn led to rapid inflation.

The added health and economic strains of the pandemic have deepened the humanitarian impact across the country. Many Afghans also blame runaway government corruption and lawlessness for the country’s poor economy.

The U.N. and its humanitarian partners will seek $1.3 billion in aid for 16 million Afghans in need this year, United Nations secretary-general spokesperson Stephane Dujarric, said this month. That’s up from an estimated 2.3 million people last year who needed life-saving assistance.

"It’s a huge increase in people who need aid," Nyamandi said, adding that with no immediate end in sight to the decades-long conflict, millions of people will continue to suffer.

According to the U.N., nearly 6,000 people – a third of them children – were killed or wounded in fighting in Afghanistan between January and September last year, Nyamandi said, according to remarks carried by The Associated Press (AP). The violence continues to force hundreds of thousands of people to flee their homes every year and limit people's access to resources, including hospitals and clinics.

Save the Children has been working in Afghanistan since 1976. The humanitarian group's programs support thousands of children and help them to get access to education and healthy food.

Apart from the war, ongoing conflicts have deprived at least 3.4 million children of the polio vaccination across Afghanistan in 2020. Provinces such as Helmand in the south, Ghazni in the southeast and Baghlan, Kunduz and Takhar in the north have the highest number of children who have yet to be vaccinated against polio due to opposition from the Taliban, who do not allow access to health care workers in areas under their control to carry out door-to-door campaigns, citing the risk of intelligence espionage. Together with Pakistan and Nigeria, Afghanistan is one of the three countries where the fatal virus has yet to be eliminated.

The Centers for Disease Control and Preventions' (CDC) report that was released in October last year said after almost two years of campaign bans by the insurgency, wild poliovirus circulation has increased in 2019 and 2020. According to the CDC's data following a decline in case numbers between 2013 and 2016, the number of cases in Afghanistan has increased each year during the period of 2017-2020 with a new vaccine-derived poliovirus type 2 outbreak beginning in 2020.

"We had worked hard for years and cornered polio to a limited geography," Jan Rasekh, a spokesperson for Afghanistan's polio eradication program said. "The coronavirus has helped polio spread beyond its endemic region of the south and southeast, and now threatens people across the country," he added, as Agence France-Presse (AFP) reported.

The U.N. Children's Fund (UNICEF) said last year that polio eradication campaigns had been suspended in dozens of countries, while measles vaccination campaigns were also put on hold in 27 countries.

In a Save the Children report in December, the group said more than 300,000 Afghan children faced freezing winter conditions that could lead to illness and death without proper winter clothing and heating. The organization provided winter kits to more than 100,000 families in 12 of Afghanistan's 34 provinces.

The kits included fuel and a heater, blankets and winter clothes, including coats, socks, shoes and hats. Nyamandi said the plight of the Afghan people is threatened by inadequate humanitarian funding pledged by wealthy nations at a conference in Geneva in November.

"Aid to Afghanistan has dropped alarmingly at a time when the humanitarian need is rising. We’re now in the unsustainable position where aid falls far short of what’s needed to meet the needs of the people," he said.

The London-based Save the Children report cites 10-year-old Brishna from eastern Nangarhar province as saying her family was forced to leave their home and move to another district because of the fighting. "Life is difficult," she said.

"My father, who is responsible for bringing us food, is sick," she added. Brishna said she and her brother collect garbage for cooking fires and it has been a long time since they had proper food and clothes. "My siblings and I always wish to have three meals in a day with some fruits, and a better life. But sometimes, we sleep with empty stomachs. During the winter we don’t have blankets and heating stuff to warm our house," she said.