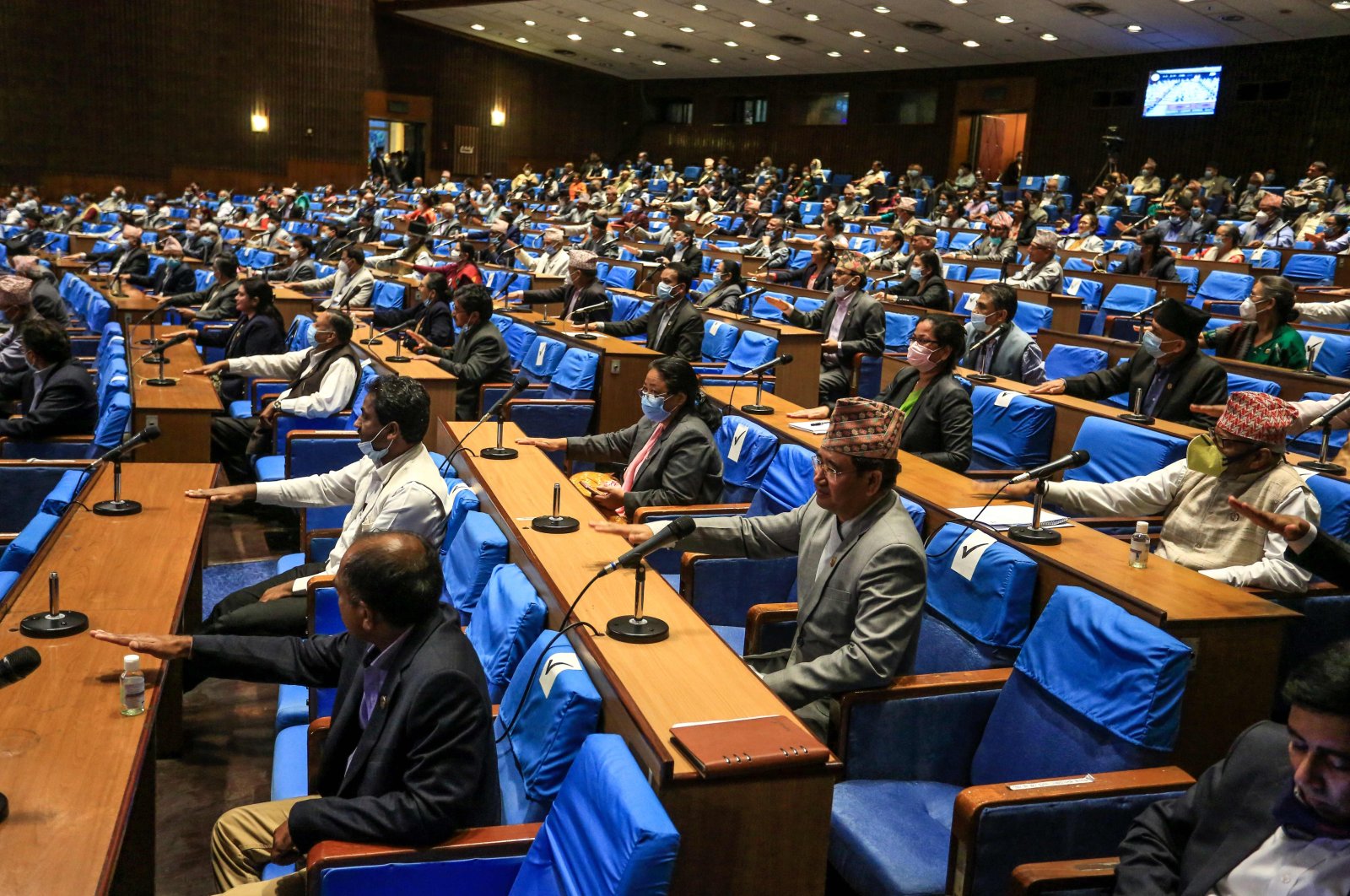 Nepal's House of Representatives members gesture as they vote on an amendment to update the national emblem with a new controversial political map in Kathmandu on June 13, 2020. (AFP Photo)
by ASSOCIATED PRESS Jun 13, 2020 6:31 pm
RECOMMENDED

Nepal’s Parliament on Saturday overwhelmingly approved a constitutional amendment to change the nation’s political map to include territory claimed by both India and Nepal.

The voting follows the government's issuing of a new map last month that showed the disputed territory within its borders.

The move was strongly criticized by India and has soured relations between the South Asian neighbors. The constitutional amendment is likely to further strain ties.

House of Representatives Speaker Agni Kharel said all 258 members who were present voted in favor of the proposal. To pass, it needed approval from two-thirds of the 275 lawmakers.

"This is in favor of the people and national interest. This was unanimous agreement with no opposition," Prime Minister Khadga Prasad Sharma Oli told reporters. "It is not just the Parliament, but the entire nation is behind this.”

Indian Ministry of External Affairs spokesperson Anurag Srivastava said Saturday that India had already made its position clear on the matter.

"This artificial enlargement of claims is not based on historical fact or evidence and is not tenable,” he said. "It is also in violation of our current understanding to hold talks on outstanding boundary issues.”

The latest border dispute between the countries began over India’s inauguration last month of a Himalayan link road built in a disputed region that lies at a strategic three-way junction with Tibet and China.

The 80-kilometer (50-mile) road, inaugurated by Indian Defense Minister Rajnath Singh, cuts through the Lipu Lekh Himalayan pass, considered one of the shortest and most feasible trade routes between India and China.

Nepal fiercely contested the inauguration of the road and viewed the alleged incursion as a stark example of bullying by its much larger neighbor, triggering a new dispute over the strategically important territory.

Nepal, which was never under colonial rule, has long claimed the areas of Limpiyadhura, Kalapani and Lipu Lekh in accordance with the 1816 Sugauli treaty with the British Raj, although these areas have remained in the hands of Indian troops since India's 1962 war with China.

The dispute over the territory brought a new wedge in relations between the two nations, leading to an exchange of strong-worded statements and remarks from both sides.

Nepal has proposed resolving the border dispute through dialogue, but officials say they have not received any response from India.