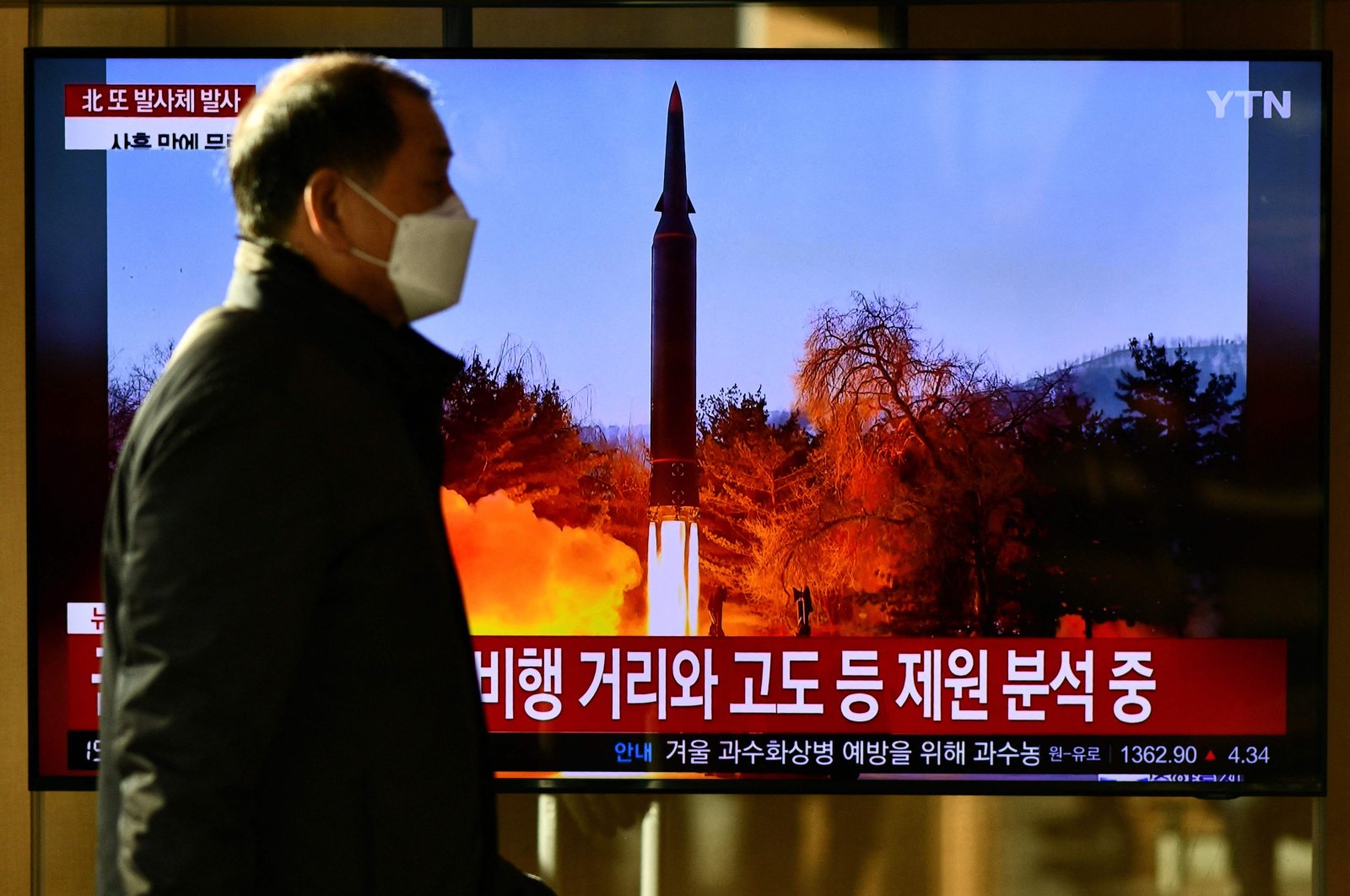 A man walks past a television report showing a news broadcast with file footage of a North Korean missile test, at a railway station in Seoul, South Korea, Jan. 14, 2022, after North Korea fired an unidentified projectile eastward in the country's third suspected weapons test in just over a week. (AFP Photo)
by REUTERS Jan 14, 2022 1:53 pm
RECOMMENDED

North Korea fired at least two ballistic missiles on Friday, its third test in two weeks, just hours after criticizing a U.S. push for new sanctions over the previous launches as a "provocation" and warning of a strong reaction.

South Korea's Joint Chiefs of Staff (JCS) said it had detected what it presumed were two short-range ballistic missiles launched eastward from North Pyongan Province on the west coast of North Korea, near the border with China.

Japan's coast guard also reported that the North fired what could be a ballistic missile. The missiles appeared to have landed in the sea outside Japan's exclusive economic zone, broadcaster NHK reported, citing an unnamed Japanese defense ministry official.

"The actions of North Korea, including the repeated ballistic missile launches, are a threat to the safety of our nation and the region, and they are an important issue for all of international society," Hirokazu Matsuno, Japan's chief cabinet secretary, told a regular news conference.

The U.S. military's Indo-Pacific Command said while it assessed that the launch does not pose an immediate threat to the United States or its allies, it highlights the "destabilizing impact of the (North Korea's) illicit weapons program."

"Our military is tracking and monitoring developments in preparation for potential additional launches while maintaining readiness posture," the JCS said in a statement.

The launch would be the third since New Year's Day, an unusually high pace of missile tests. The previous two were of "hypersonic missiles," North Korean state media reported, capable of high speeds and maneuvering after launch.

In contrast to Friday's tests, each of the earlier launches involved a single missile which were fired from Jagang Province, neighboring North Pyongan.

Kim Dong-yup, a former South Korea navy officer who teaches at Seoul's Kyungnam University, said North Korea could have fired previously deployed SRBMs such as the KN-23 or KN-24.

"It could fit in their ongoing winter exercises, while sending a message to the United States through action following the state media statement," he said.

North Korea defended the missile tests as its legitimate right to self-defense and said the United States was intentionally escalating the situation by imposing new sanctions, state media reported earlier on Friday, citing the Foreign Ministry.

North Korea's recent development of a "new-type weapon" was just part of its efforts to modernize its national defense capability, and did not target any specific country or harm the security of neighboring countries, the Foreign Ministry said in a statement on the KCNA state news agency.

The statement warned of an unspecified "stronger and certain reaction" if the United States adopts a confrontational stance.

U.S. Secretary of State Antony Blinken said the United States had made clear it had no hostile intent toward North Korea and was willing to engage in talks without preconditions, but that the tests were "profoundly destabilizing."

The North Korean Foreign Ministry said that while Washington may talk of diplomacy and dialogue, its actions show "it is still engrossed in its policy for isolating and stifling" North Korea.

"The U.S. is intentionally escalating the situation even with the activation of independent sanctions, not content with referring the DPRK's just activity to the UN Security Council," the statement said.

Kim Dong-yup pointed to remarks last year by North Korean leader Kim Jong Un that Pyongyang will approach Washington "on the principle of answering force with toughness, and good faith in kind."

"A eye for eye, tooth for a tooth," Kim Dong-yup said. "North Korea might be saying they'll go their own way without being intimidated."