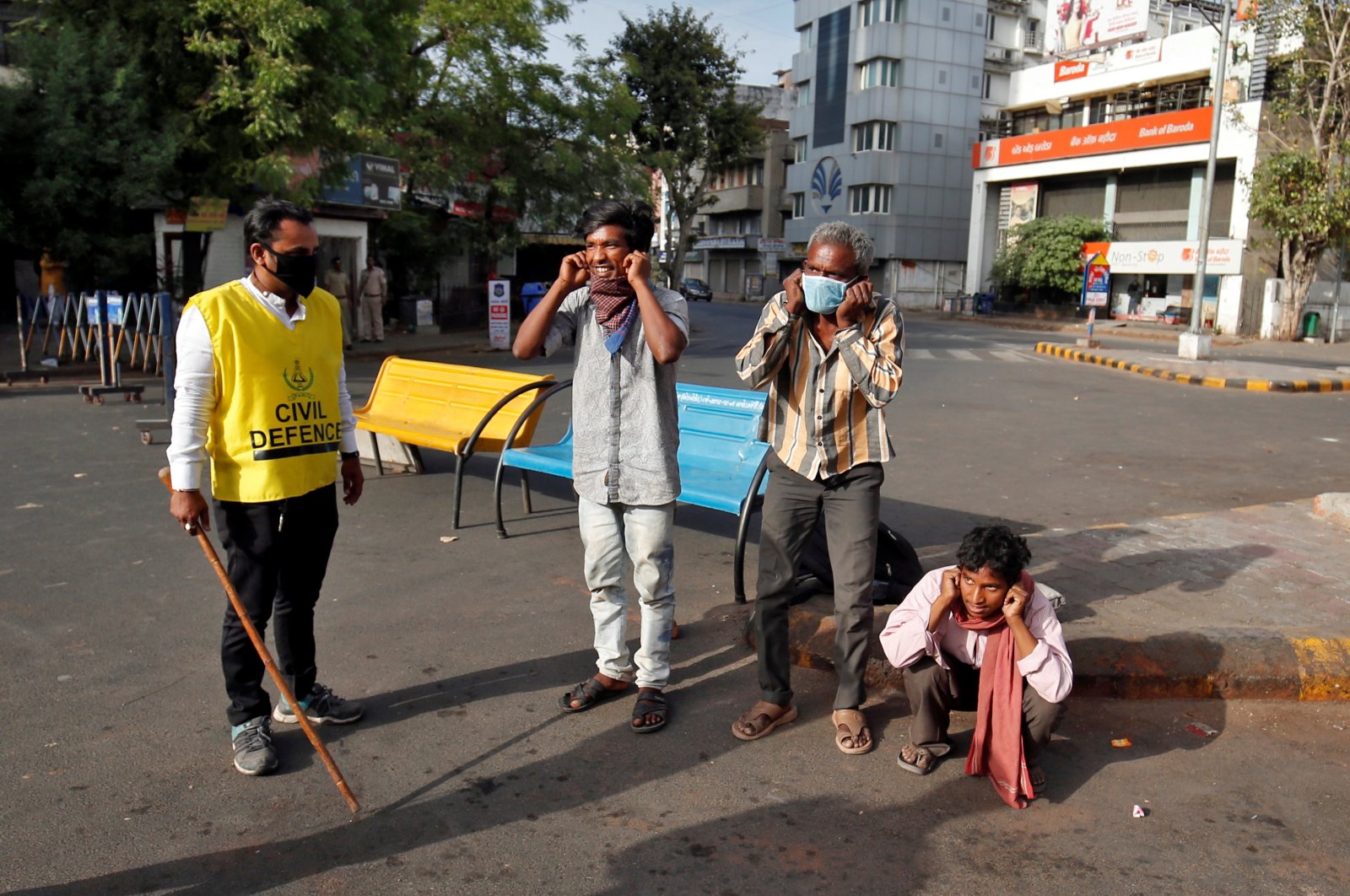 People hold their ears while doing sit-ups as a punishment for breaking a lockdown, Ahmedabad, March 24, 2020. (REUTERS Photo)
by REUTERS Mar 24, 2020 5:07 pm
RECOMMENDED

Police in India's northern city of Meerut are making citizens who break its lockdown hold up signs reading, "I am a friend of coronavirus," or "I am the enemy of society," before posting their pictures on Twitter.

Most of India, which had 482 infections and nine deaths by Tuesday, is under lockdown to curb the spread of the virus, including Meerut, in the most populous state of Uttar Pradesh.

Mosque worker Mohammad Alim, 40, said he took a widow and her three sons to a police station in the city on his motorbike on Monday night to report an altercation with neighbors.

"When I reached the police station, the inspector handed me that shaming sign and clicked my picture," Alim told Reuters.

"I feel scared. I do not know who to complain to now," added Alim, who also accused officers of verbally abusing him.

Meerut police tweeted a picture of Alim holding a sign that read "I am a friend of coronavirus" with the caption, "Some people do not care about society's safety."

The police Twitter feed had nine more similar pictures, with comments in Hindi, including, "I do not believe in the law of the country" and "I do not care about my family or society."

Meerut police official Akhilesh Narayan Singh told Reuters that only people who did not follow orders to turn around and go home were photographed, adding that 22 cases of lockdown violations had been filed.

In at least three other districts in the state, people who violate the lockdown order are being made to do sit-ups and squats, a police officer at the Malhaur police outpost in Lucknow, the state capital, told Reuters.

"They asked the boys to go after 10 sit-ups," added the man, who sought anonymity because he was not authorized to comment.

A spokesman for Lucknow police said they had no information about the sit-ups.

A few weeks ago, the state government put up six hoardings in prominent parts of Lucknow identifying people it said had joined violent protests against a new citizenship law based on religion.

Separately, in the western state of Gujarat, what appears to be a list of almost 200 people who recently entered India from abroad has been circulating on WhatsApp.

It was not immediately clear where the list, which includes telephone numbers and addresses, originated.

"I am getting calls from random people who are inquiring if I did tests," said a 21-year-old university student who recently flew back from the United States, who asked for anonymity.