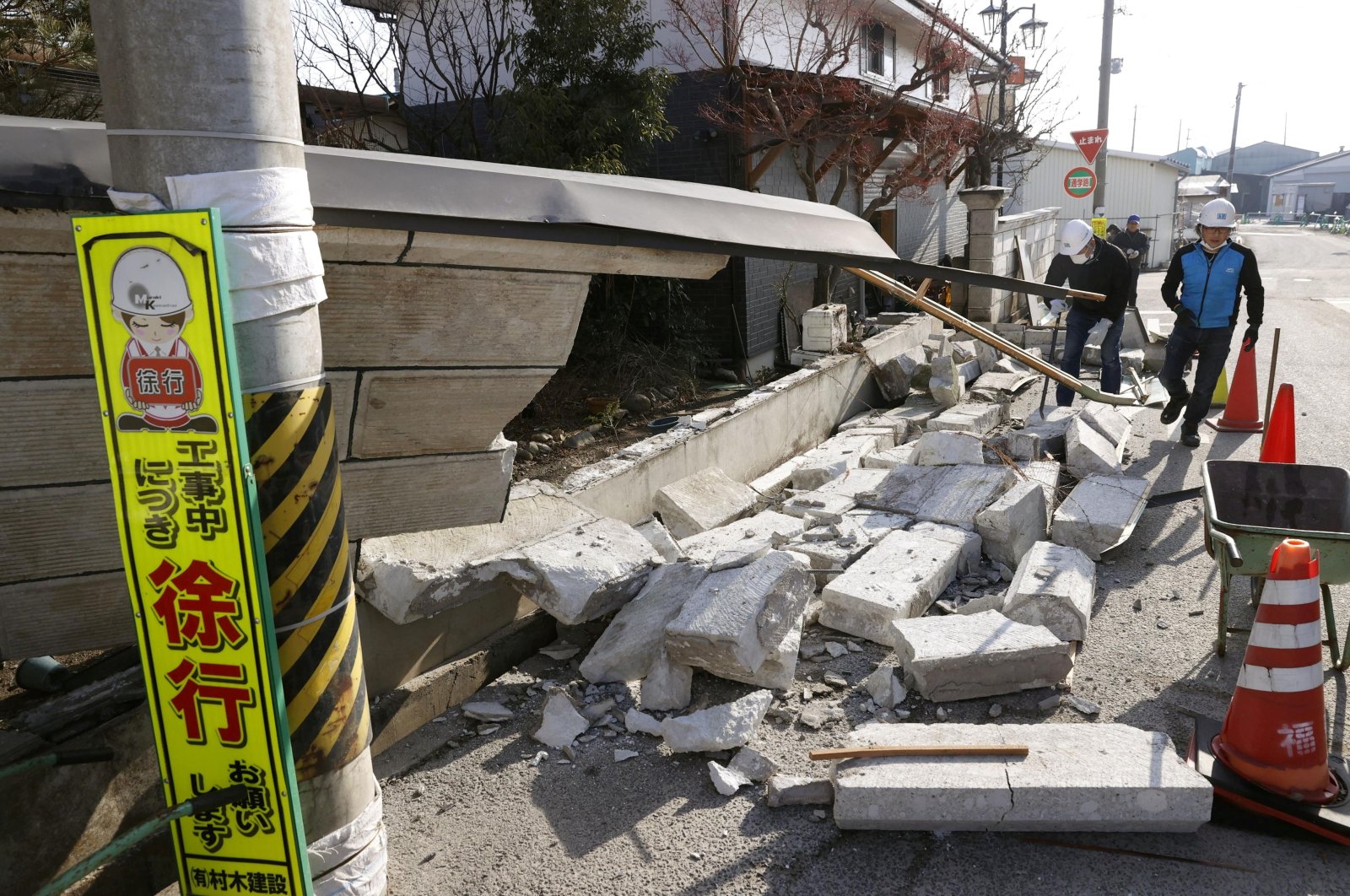 Debris from a wall that collapsed during a strong earthquake covers the sidewalk in Kunimi, Fukushima Prefecture, Japan, Feb. 14, 2021. (Kyodo via Reuters)
by French Press Agency - AFP Feb 14, 2021 10:18 am
RECOMMENDED

No casualties have been reported after the late-night quake in the Pacific, which did not trigger a tsunami, and no abnormalities were observed at the stricken Fukushima nuclear plant.

But residents preparing to mark the 10th anniversary of the triple disaster said they were frightened by Saturday's jolt – which the Japan Meteorological Agency (JMA) said was considered an aftershock of the massive tremor on March 11, 2011.

"I was at home ... the shaking was so strong I became truly afraid for my physical safety," Masami Nakai, a municipal official in Soma city in northern Fukushima, told Agence France-Presse (AFP).

Images posted online showed a car crushed by a rock lantern in the car park of a Shinto shrine, while another showed broken glass and items thrown from the shelves at a shop.

The disaster agency said 114 injuries – six classed as "serious" – were reported in the region and also around Tokyo, where the quake was felt strongly just after 11 p.m. on Saturday.

Authorities were assessing the impact of a landslide on a highway, government spokesperson Katsunobu Kato said, and aerial TV footage showed another landslide at a remote race circuit.

Kato warned residents about the possibility of strong aftershocks in the next week and further landslides due to the heavy rain forecast.

"Particularly for the next two to three days, there might be very strong earthquakes," Kato said.

The quake came as Japan attempts to contain the spread of COVID-19 while preparing for the pandemic-postponed Tokyo Olympics, due to start in July.

Kato said that by early Sunday more than 250 people were at 173 emergency shelters in Fukushima and surrounding regions, with social distancing measures in place, such as tents for each family. Many may now have returned home, he added.

Pfizer Inc., whose coronavirus vaccine is set to become the first to be approved in Japan on Sunday, told the government that the quake did not affect facilities storing its jabs, Kato said.

The JMA said the earthquake hit at a depth of 60 kilometers (37 miles). The U.S. Geological Survey registered the quake at a revised magnitude of 7.1 with a depth of 51 kilometers.

It briefly caused around 950,000 homes to lose power, and Kato said water outages were affecting 4,800 households, with self-defense troops heading to affected areas to deliver water.

Tomoko Kobayashi, who works at a traditional inn in Fukushima's Minamisoma city, told Kyodo news agency that "the initial jolt felt more powerful than the one I experienced in the Great East Japan Earthquake" of 2011.

Renowned author Yu Miri, who also lives in Minamisoma, tweeted a photo of her home, showing books, potted plants and other belongings strewn across the floor.

Japan sits on the Pacific "Ring of Fire," an arc of intense seismic activity that stretches through Southeast Asia and across the Pacific basin.

More than 18,000 people were left dead or missing in the March 2011 natural disaster.