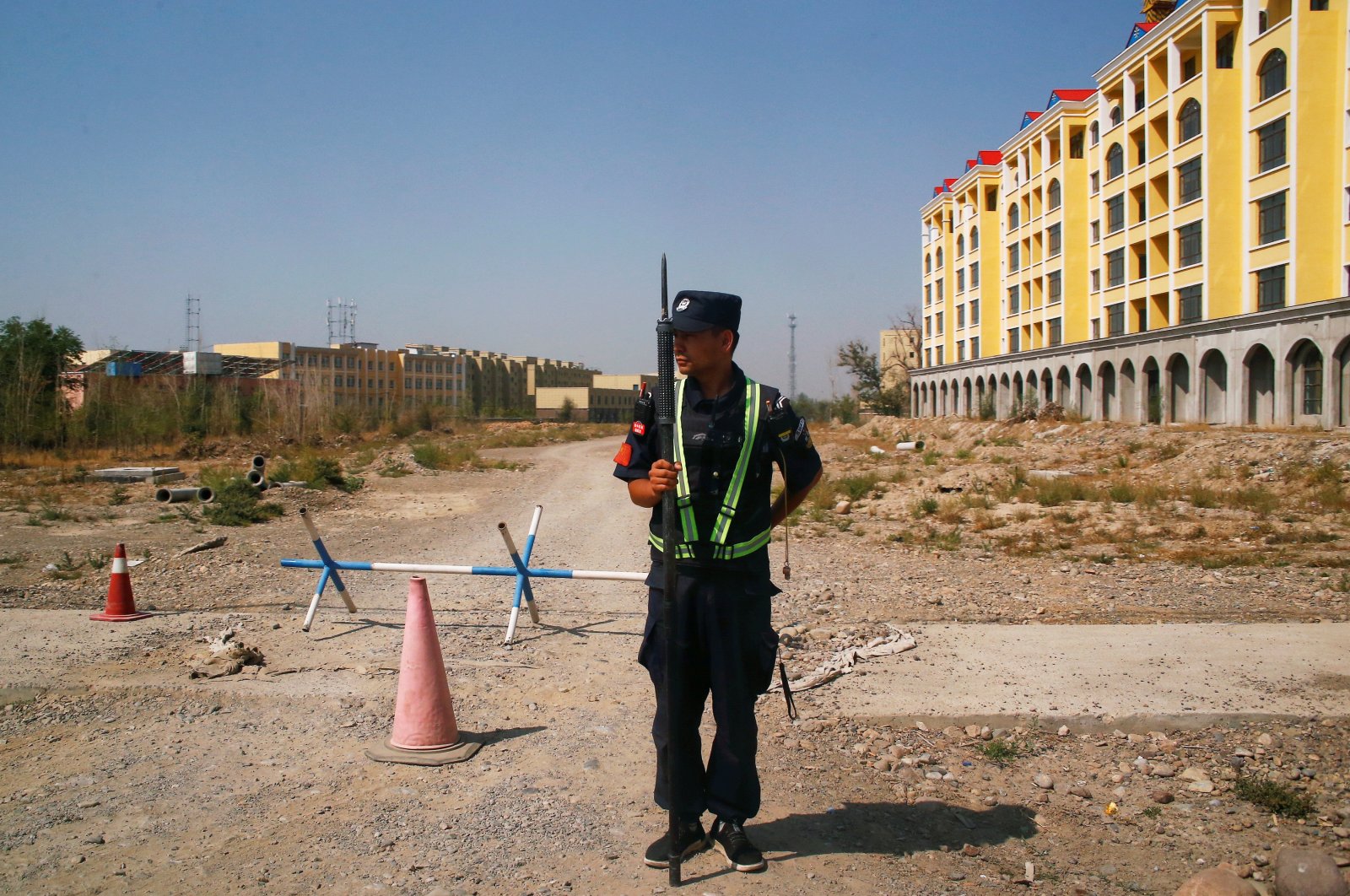 A Chinese police officer takes his position by the road near what is officially called a vocational education center in Yining in the Xinjiang Uighur Autonomous Region, China, Sept. 4, 2018. (Reuters Photo)
by Agencies Dec 15, 2020 10:55 am
RECOMMENDED

Hundreds of thousands of Uighur Muslims in China's northwestern Xinjiang Uighur Autonomous Region are being forced to pick cotton by hand through a coercive state labor scheme, a new report by a U.S.-based think tank said Monday.

Rights activists said Xinjiang is home to a vast network of extrajudicial internment camps that have imprisoned at least 1 million people, which China has defended as vocational training centers to counter extremism.

A report by the Washington-based think tank Center for Global Policy published on Monday, referencing online government documents, said that in 2018 three majority-Uighur regions within Xinjiang sent at least 570,000 people to pick cotton as part of a state-run coercive labor transfer scheme. Researchers estimate that the total number involved in the cotton-picking program, which relies heavily on manual labor, exceeds that figure by "several hundred thousand."

Xinjiang is a global hub for the crop, producing over 20% of the world's cotton, with the report warning of the "potentially drastic consequences" for global supply chains. Around a fifth of the yarn used in America comes from Xinjiang, according to the Agence France-Presse (AFP).

The region is home to around 10 million Uighurs. The Turkic Muslim group, which makes up around 45% of Xinjiang's population, has long accused Chinese authorities of cultural, religious and economic discrimination. About 7% of the Muslim population in Xinjiang has been incarcerated in an expanding network of "political reeducation" camps, according to U.S. officials and United Nations experts. Over 380 suspected detention facilities have been identified in the Xinjiang region, the Australian Strategic Policy Institute (ASPI) reported in September.

Beijing said that all detainees have "graduated" from the centers, but reports have suggested that many former inmates have been transferred to low-skilled manufacturing factory jobs, often linked to the camps. The think tank report said labor transfer scheme participants are heavily surveilled by police, with point-to-point transfers, "military-style management" and ideological training, citing government documents.

"It is clear that labour transfers for cotton-picking involve a very high risk of forced labour," Adrian Zenz, who uncovered the documents, wrote in the report. "Some minorities may exhibit a degree of consent in relation to this process, and they may benefit financially. However ... it is impossible to define where coercion ends and where local consent may begin."

The report also says there is a strong ideological incentive to enforce the scheme, as the boost in rural incomes allows officials to hit state-mandated poverty alleviation targets.

China has strongly denied allegations of forced labor involving Uighurs in Xinjiang while accusing the U.S. of wanting to "suppress Xinjiang companies." Beijing also says training programs, work schemes and better education have helped stamp out extremism in the region.

Earlier this month, the U.S. banned imports of cotton produced by the Xinjiang Production and Construction Corps, a major paramilitary entity, which covers about a third of the crop produced in the entire region. Another proposed bill banning all imports from Xinjiang has yet to pass the U.S. Senate.

Several international brands including Adidas, Gap and Nike have been accused of using Uighur forced labor in their textile supply chains, according to a March report by the ASPI.

Meanwhile, International Criminal Court (ICC) prosecutors have rejected calls by exiled Uighurs to investigate China for alleged genocide and crimes against humanity, the chief prosecutor's office said in a report on Monday.

The Uighurs handed a huge dossier of evidence to the court in July accusing China of locking more than 1 million Uighurs and other mostly Muslim minorities in reeducation camps and of forcibly sterilizing women, but the office of prosecutor Fatou Bensouda said it was unable to act because the alleged acts happened on the territory of China, which is not a signatory to The Hague-based ICC.

In its annual report, Bensouda's office said, "This precondition for the exercise of the court's territorial jurisdiction did not appear to be met with respect to the majority of the crimes alleged." There was also "no basis to proceed at this time" on separate claims of forced deportations of Uighurs back to China from Tajikistan and Cambodia, the ICC report said.

The Uighurs had argued that even though the alleged deportations did not happen on Chinese soil, the ICC could act because they happened in Tajik and Cambodian territories, and both of them are ICC members.

Lawyers for the Uighurs have asked the court to reconsider "on the basis of new facts or evidence," the ICC prosecutor's report said.

China has called the accusations baseless and says the facilities in the northwestern Xinjiang region are job training centers aimed at steering people away from terrorism. The ICC has no obligation to consider complaints filed with the prosecutor, who can decide independently what cases to submit to judges at the court, set up in 2002 to achieve justice for the world's worst crimes.