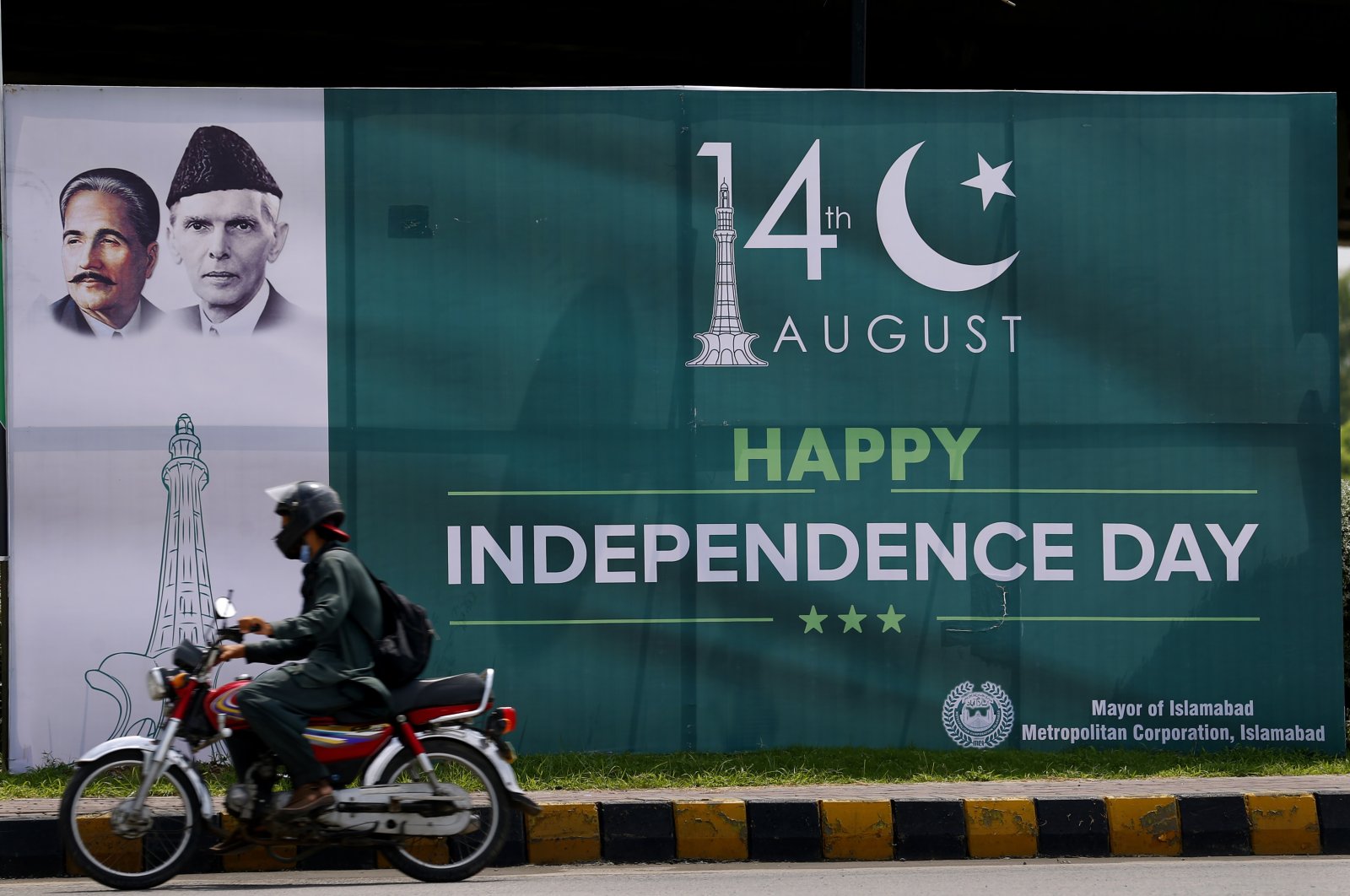 A vendor wearing a mask with the colors of Pakistan's national flag holds another mask while waiting for customers at a market in Karachi, Pakistan, Aug. 12, 2020. (AFP Photo)
by DAILY SABAH WITH AA Aug 13, 2020 12:51 pm
RECOMMENDED

Streets in different cities and regions in Pakistan, especially in the capital Islamabad, were decorated with the green and white colors of the Pakistani flag as the country celebrates its 74th Independence Day on Aug. 14. with caution due to the COVID-19 pandemic which has killed over 6,000 people in the country.

According to Indian newspaper The Tribune, vendors in Islamabad have been preparing their stalls with flags, badges, bandanas and other various items related to the celebrations for days. Various social events, from sports competitions to seminars, from military parades to marches, were organized throughout the country.

During the celebration in Pakistan, all precautions were taken in connection with the coronavirus, which has infected more than 286,000 people in the country. Hand sanitizers were available at the entrance to the Independence Day celebration areas and participants had to wear masks and adhere to social distancing. Participants were monitored with thermal cameras installed in the event areas, and indoor spaces were ventilated at regular intervals.

The nation carved out of the subcontinent as a homeland for Muslims began its journey in 1947, amid tensions with India over the issue of Jammu and Kashmir, fears of survival due to economic hardships, the rush of refugees and raging communal riots.

In one of the world's largest displacements so far, according to historians, over 6.5 million Muslims from different parts of India migrated to Pakistan, following the end of British colonial rule in the subcontinent in 1947.

Now the only Muslim nation possessing a nuclear arsenal, with a population of over 210 million, Pakistan began its voyage with no official secretariat or housing.

Historians say that despite challenges, the country has accomplished several feats over the past 73 years in the fields of science and technology, medicines and sports.

"Like any other country, Pakistan's history is a mix of failures and successes. No doubt, the country should and could have been in a better position today, keeping in view its strategic and economic potential," Akhtar Hussain Sandhu, a Lahore-based historian, told Anadolu Agency (AA).

He said the country can take pride in many accomplishments in different fields, despite facing a series of conventional and unconventional wars, with India and its active involvement in the Afghan war against the now-defunct superpower Soviet Union, and then participating in the U.S.-led war against terrorism.

Historian Muhammad Reza Kazimi said that survival was one of the biggest achievements of Pakistan as many had predicted it would not last long as a country.

"Pakistan was conceded by the British because it was not expected to survive. The last British Viceroy of United India Lord Mountbatten had told the Prime Minister of India (Jawahar Lal Nehru) that Pakistan was not economically viable and would come begging to rejoin India within six months," said Kazimi, who is editor of Karachi-based quarterly Journal.

Pakistan was given neither the old capital Calcutta nor the new capital New Delhi. It declared the port city Karachi its capital, which had been the administrative center of southern Sindh province for only a decade.

"There was no secretariat, no housing and a rush of refugees. Still, the first generation of Pakistan’s employees dug in their heals, using thorns instead of pins to club papers, even tables and chairs and stationery from their resources, and made Pakistan survive," Kazimi said.

"One can accuse us of corruption, mismanagement and poor governance in the 21st century, but at the crucial time we displayed honesty, dedication and courage and ensured survival," he added.

Echoing Kazimi's views, Sandhu said that Pakistan has successfully acquired influence in specific regions and has acquired a place in world politics due to its strategic location.

"Freedom, a new country and founding fathers like (Mohammad Ali) Jinnah were the blessings. Other big achievements were the building of institutions, a constitution and a nuclear program,” said Sandhu, who teaches history at the iconic Government Islamia College in Lahore.

"Pakistan did not have enough colleges, universities, schools and technological institutes, besides having a small industrial base. But over time, Pakistan has considerably progressed in the fields of science and technology, and education," he added.

According to Atta-ur-Rehman, a renowned scientist, Pakistan has remarkably progressed in the field of science. He mentioned that the country is manufacturing and exporting military hardware like aircraft, tanks and other conventional weaponry.

Speaking to AA, Rahman, who headed the Science and Technology Ministry from 2000-2002, said Pakistan has recently joined a handful of countries that manufacture ventilators and in 2002 launched its first indigenously built satellite, Paksat.

"Presently, Pakistani researchers are producing 916 papers per 10 million population compared to the 708 papers produced by Indian researchers annually against the same population figures," he added.

Rahman said that in 2000, India was four times father ahead than Pakistan in terms of the publication of research papers. The trend started shifting in Pakistan’s favor in 2018.

Sandhu noted, "Today, Pakistani scientists, doctors, and engineers have got recognition even in the U.S. and Europe."

Furthermore, the country is one of the largest producers of several key agricultural commodities, including rice, wheat, sugarcane, cotton and fruits, he added.