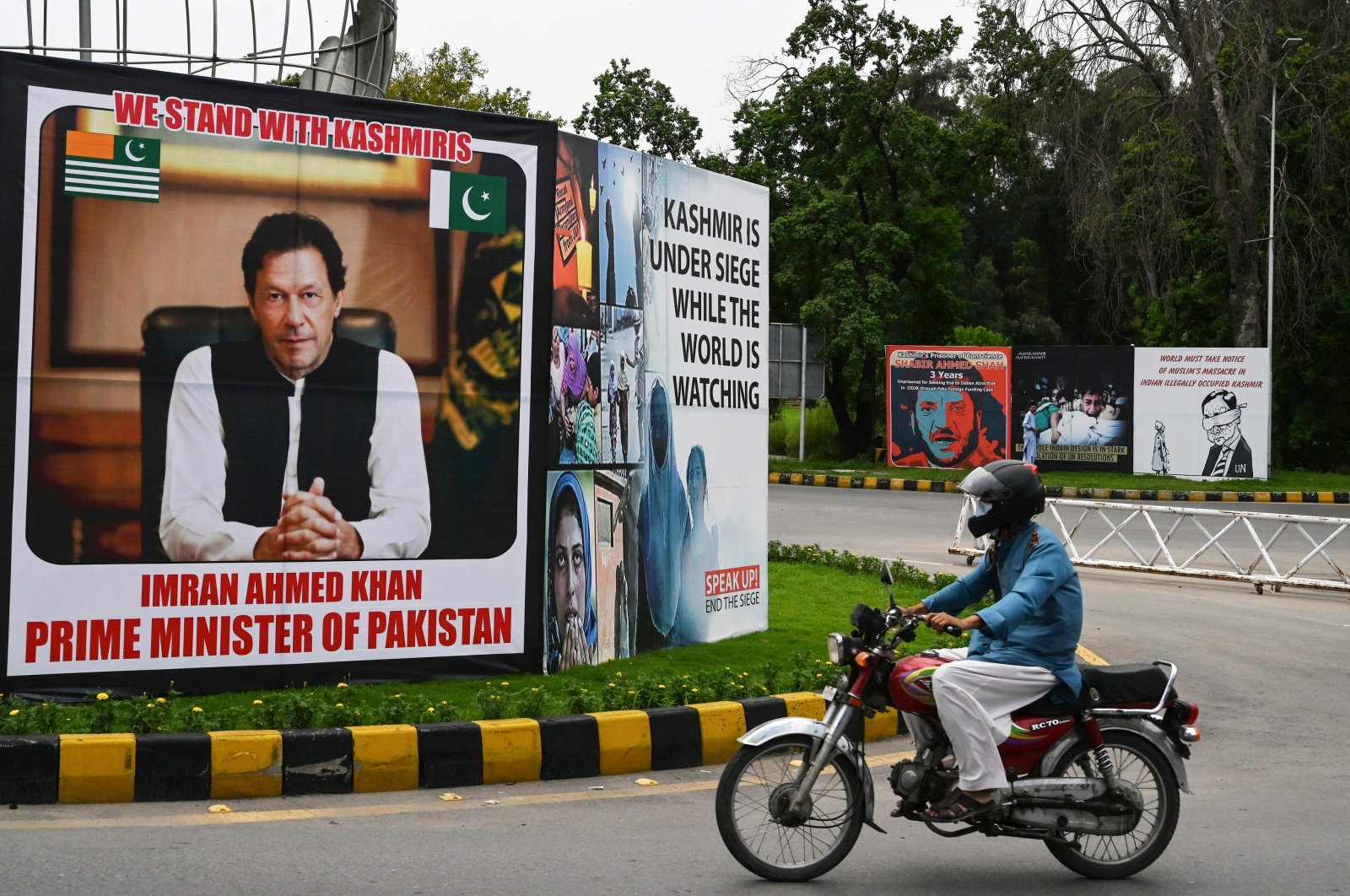 A motorcyclist rides past a billboard displaying a picture of Pakistan's Prime Minister Imran Khan along a street in Islamabad, Aug. 4, 2020. (AFP Photo)
by Anadolu Agency Aug 07, 2020 3:16 pm
RECOMMENDED

Pakistan and India on Thursday traded conflicting claims over the appointment of a counsel to represent alleged Indian spy, Kulbhushan Jadhav.

Islamabad said it has again asked New Delhi to name a legal representative for Jadhav, who has been sentenced to death for spying by a Pakistani military court.

On Monday, the court directed the government to offer India and Jadhav another opportunity to appoint a counsel for the alleged spy.

Last month, Pakistan invited India to challenge Jadhav’s conviction after the accused reportedly refused to, deciding instead to file a mercy petition.

The offer was extended after Pakistan passed an ordinance in May, allowing its high courts to review sentences awarded by military courts.

"We have been briefing you on Pakistan’s position on the issue time and again from this platform. The developments you are referring to and after the directions of the Islamabad High Court of Aug. 3, we have contacted the Indian side through diplomatic channels and conveyed the same," Farooqui said.

"We are awaiting a response from India. As I mentioned earlier, we are implementing the directions of the IHC regarding the Jadhav case," she said.

New Delhi, however, contested Islamabad’s claim, saying there has been "no communication" from Pakistan after this week’s court order.

"Pakistan needs to address basic issues which pertain to effective review, fulfillment and implementation of the ICJ (International Court of Justice) judgment,” he said at a weekly briefing.

"These issues pertain to making relevant documentation available to us and providing unimpeded, unhindered and unconditional consular access to Jadhav," Srivastava said.

Jadhav – who Pakistan says was a serving officer in the Indian Navy – was arrested in 2016 in the Pakistani town of Mashkel in the southwestern Balochistan province, a few miles from the border with Iran.

Allegedly disguised as Mubarak Hussein Patel, a Muslim, he was accused of running a spy network for the Research and Analysis Wing (R&AW), India's premier intelligence agency, from the Iranian port of Chabahar.

Video confessions of his spying were also released, which India claimed to have been recorded under duress.

A Pakistani military court sentenced him to death in April 2017 on espionage and terrorism charges. No date, however, was set for his execution, which would be by hanging.

New Delhi denies Islamabad’s charges, saying Jadhav was a retired naval officer who was "kidnapped" in Iran, where he was doing business.

However, his presence in Pakistan was never credibly explained.

India moved the ICJ, which stayed the execution in May 2017, pending a final decision in the proceedings.

In July 2019, the ICJ ruled that Jadhav be treated under the Vienna Convention, asking Pakistan to provide him consular access and continue to stay his execution.