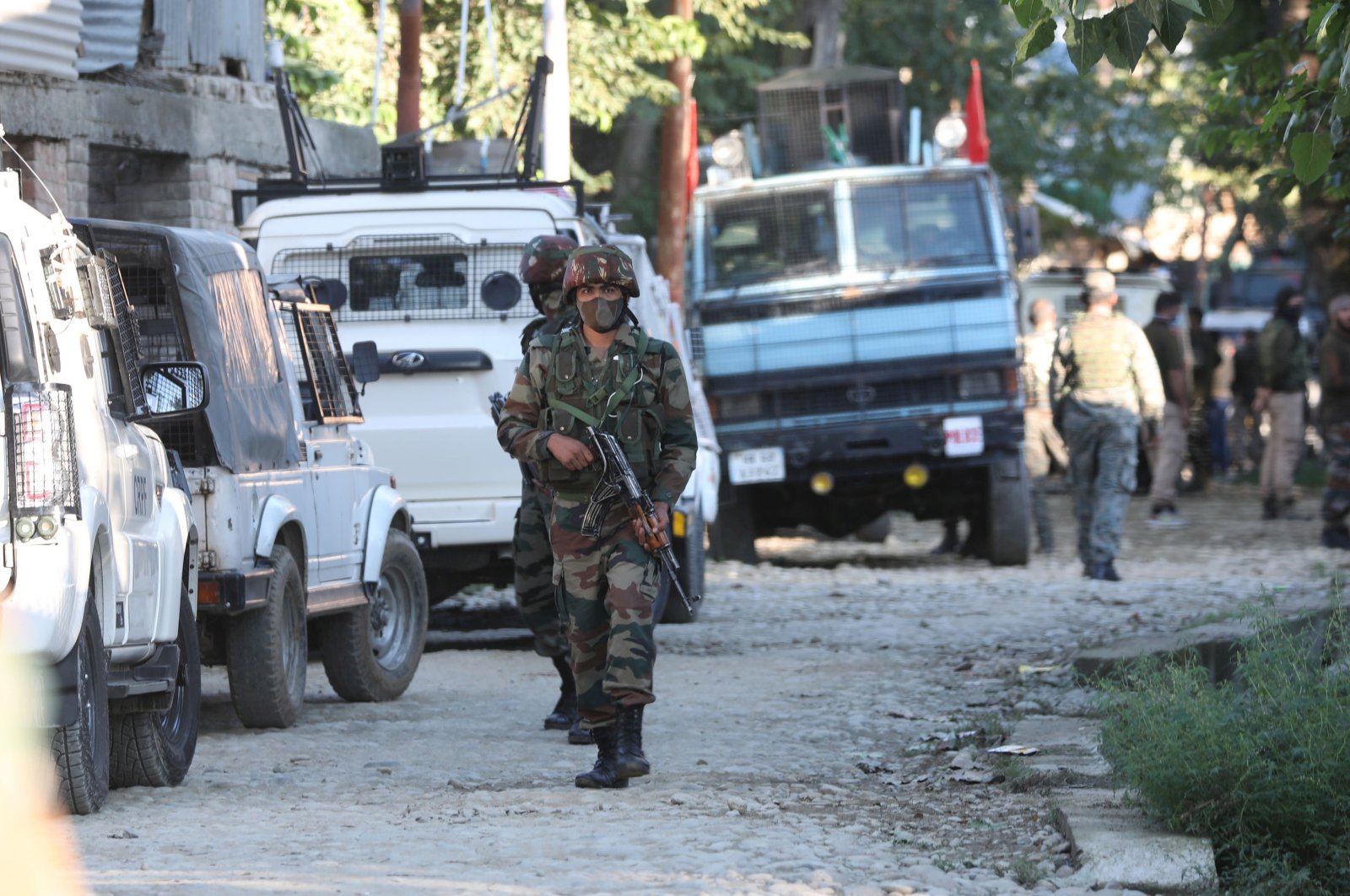 Indian security personnel stand guard near the site of a gunfight in a village in the Kawoosa area of central Kashmir's Budgam district, some 20 kilometers from Srinagar, the summer capital of Indian Kashmir, Sept. 7, 2020. (EPA Photo)
by Anadolu Agency Sep 15, 2020 12:12 am
RECOMMENDED

Pakistan on Monday summoned a senior Indian diplomat and lodged a protest over "unprovoked" firing along the border of the disputed Kashmir region, which, it claimed, killed a young girl.

"A senior Indian diplomat was summoned to the Ministry of Foreign Affairs today to register Pakistan's strong protest over ceasefire violations by the Indian occupation forces along the Line of Control (LoC) on the night of 13th September 2020," the Foreign Ministry said in a statement.

The LoC is a de facto border that divides the disputed Himalayan valley between the two nuclear rivals.

Earlier, Pakistan's army said an 11-year-old girl was killed and four others, including a 75-year-old woman and two young boys, were injured in the firing in Hotspring and Rakhchikri Sectors.

Islamabad claims that New Delhi has committed at least 2,245 cease-fire violations in 2020 so far, which have "martyred" 18 and injured 180 other innocent civilians.

An Indian army spokesman, on the contrary, accused Pakistan of violating the cease-fire at the LoC in Poonch district.

"There have been 3,186 incidents of Ceasefire Violations along Line of Control in Jammu region in this year (from 01 January to 07 September, 2020)," it said in a written reply to a query in Parliament.

"In addition, 242 incidents of cross-border firing have occurred along Indo-Pak International Border in Jammu region in this year (01 January to 31 August, 2020) ... appropriate retaliation to the ceasefire violations, as required, has been carried out by Indian Army/BSF (Border Security Force)," it said.

On Aug. 5, 2019, the Indian government revoked Article 370 and other related provisions from its Constitution, scrapping the state with its autonomy. The region was also split into two federally administered territories.

Simultaneously, India locked down the region, detained thousands of residents, imposed restrictions on movement and enforced a communications blackout.

Measures have been eased, but internet speeds are still restricted. People are also confined indoors now because of the coronavirus.

A two-day-long curfew was reimposed on Aug. 5, 2020, as Kashmiris marked the annexation anniversary as "black day."

Pakistan has unveiled a new political map, which identifies Indian-administered Kashmir as a disputed territory and states that a decision on its final status will be decided under United Nations resolutions.