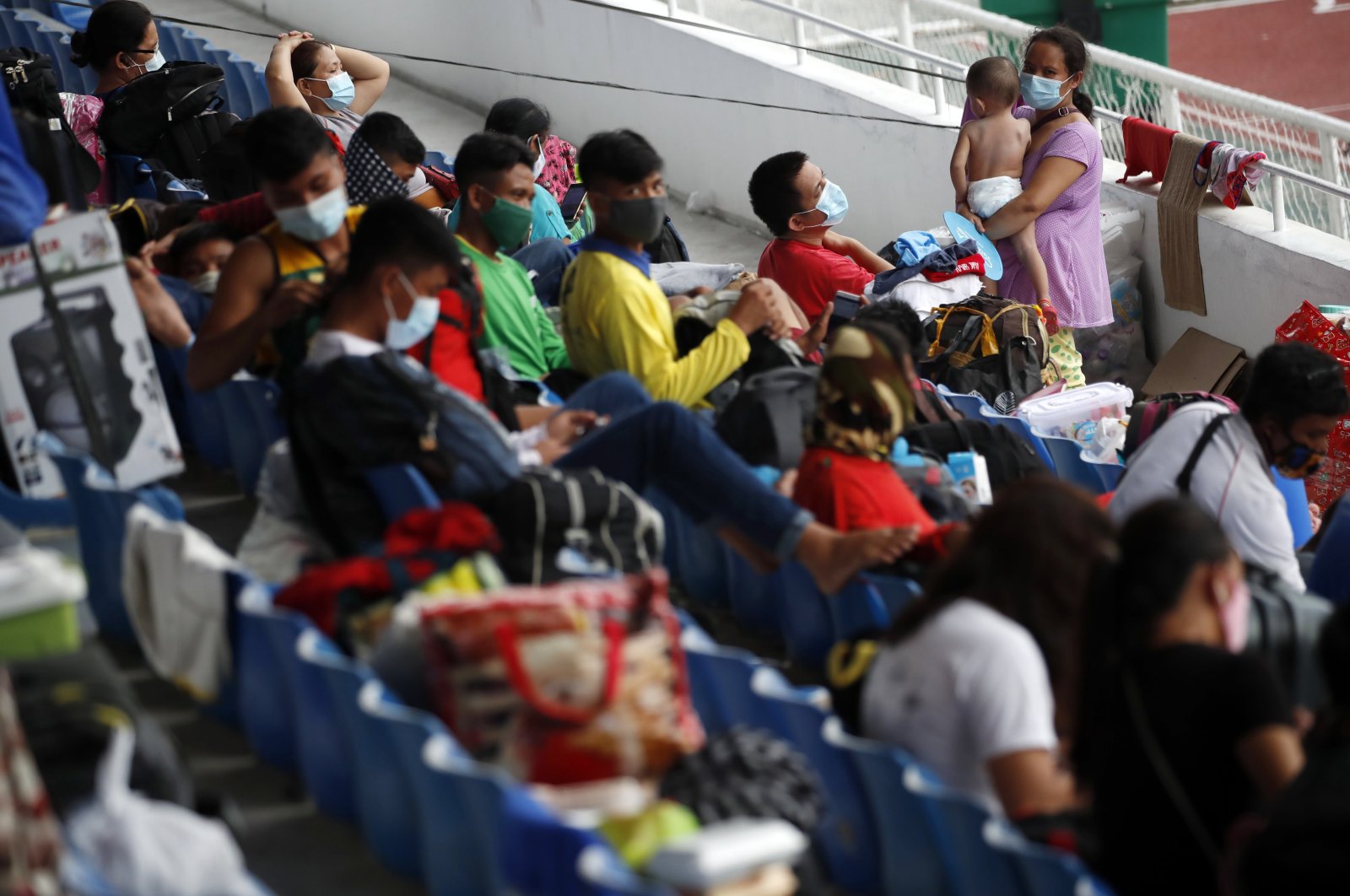 Stranded Filipino villagers with their belongings take shelter inside a gymnasium during the coronavirus and COVID-19 disease pandemic in Manila, Philippines, 29 July 2020. (EPA Photo)
by ASSOCIATED PRESS Aug 02, 2020 1:27 pm
RECOMMENDED

Coronavirus infections in the Philippines surged past 100,000 Sunday in a troubling milestone after medical groups declared that the country was waging "a losing battle” against the virus and asked the president to reimpose a lockdown in the capital.

The Department of Health reported a record-high daily tally of 5,032, bringing the total confirmed cases in the country to 103,185, including more than 2,000 deaths. The Philippines has the second-most cases in Southeast Asia after Indonesia and has had more infections than China, where the pandemic began late last year.

President Rodrigo Duterte eased a tough virus lockdown in the capital, Manila – a city of more than 12 million people – on June 1 after the economy shrank slightly in the first quarter, its first contraction in more than two decades. After shopping malls and workplaces were partially reopened and limited public transport was allowed, infections spiked sharply with increased virus testing.

More than 50,000 infections were reported in less than four weeks and leading hospitals began warning that their coronavirus wards were fast being overwhelmed to capacity again, as they were when cases soared alarmingly in April.

After Duterte further relaxed quarantine restrictions and allowed more businesses, including gyms, internet cafes and tattoo shops, to reopen, leaders of nearly 100 medical organizations held an online news conference Saturday and warned that the health system may collapse as many medical personnel fall ill or resign out of fear, fatigue or poor working conditions.

"Our health care workers are burnt out with the seemingly endless number of patients trooping to our hospitals,” the medical groups said in a letter to Duterte that they read at the news conference.

They pleaded for the president to reimpose a lockdown in Manila from Aug. 1 to 15 to give health workers "a time out” and allow the government to recalibrate its response to the monthslong pandemic.

"We are waging a losing battle against COVID-19 and we need to draw up a consolidated, definitive plan of action,” said the groups, which represent more than a million nurses, doctors and other medical personnel.

The groups said the gradual easing of coronavirus restrictions "has inadvertently fueled public misperception that the pandemic is getting better. It is not.”

They expressed fears to Duterte that the Philippine coronavirus crisis may worsen like in the U.S. "The progressive decline in compliance will push us to the brink to become the next New York City, where COVID-19 patients die at home or in stretchers, unable to find vacancies.”

The U.S. has had more than 4.6 million confirmed infections and more than 154,000 deaths, by far the highest tolls in the world, based on Johns Hopkins University tallies.

Leaders of the Philippines' dominant Roman Catholic church immediately heeded the medical community’s call, saying they will return to lockdown-like restrictions by temporarily stopping actual church services in Manila and shift all Masses back online.

"It seems that the current responses are not working because the cases are rising,” Bishop Broderick Pabillo said.

Cabinet members have met with medical industry leaders and were to meet with Duterte on Sunday to decide on a response, presidential spokesman Harry Roque said.

Businesses in the capital and outlying regions comprise about 67% of the national economy and the administration has walked a tightrope between public health and economic revival, Roque said.

Critics have accused Duterte and his top officials of failing to immediately launch massive virus tests to be able to identify and contain hotspots early on, especially when they placed the capital under a police-enforced lockdown in mid-March. The poverty-stricken country has struggled with polio, measles and cholera outbreaks for years and officials have been aware of inadequate health resources long before the pandemic hit, the critics said.

Duterte has also acknowledged that corruption by local officials tainted a massive cash aid program for about 23 million poor families that has been widely criticized for delays and chaotic enforcement.

A leading source of global labor, the Philippines, like Indonesia, has additionally been battered after hundreds of thousands of Filipinos, including cruise ship crews, lost their jobs worldwide due to the pandemic then scrambled to head home.

The government has helped bring home more than 115,000 Filipinos from across the world since February and another 100,000 need to be repatriated in the next two months in the largest pandemic-sparked homecoming in Philippine history, according to the Department of Foreign Affairs.