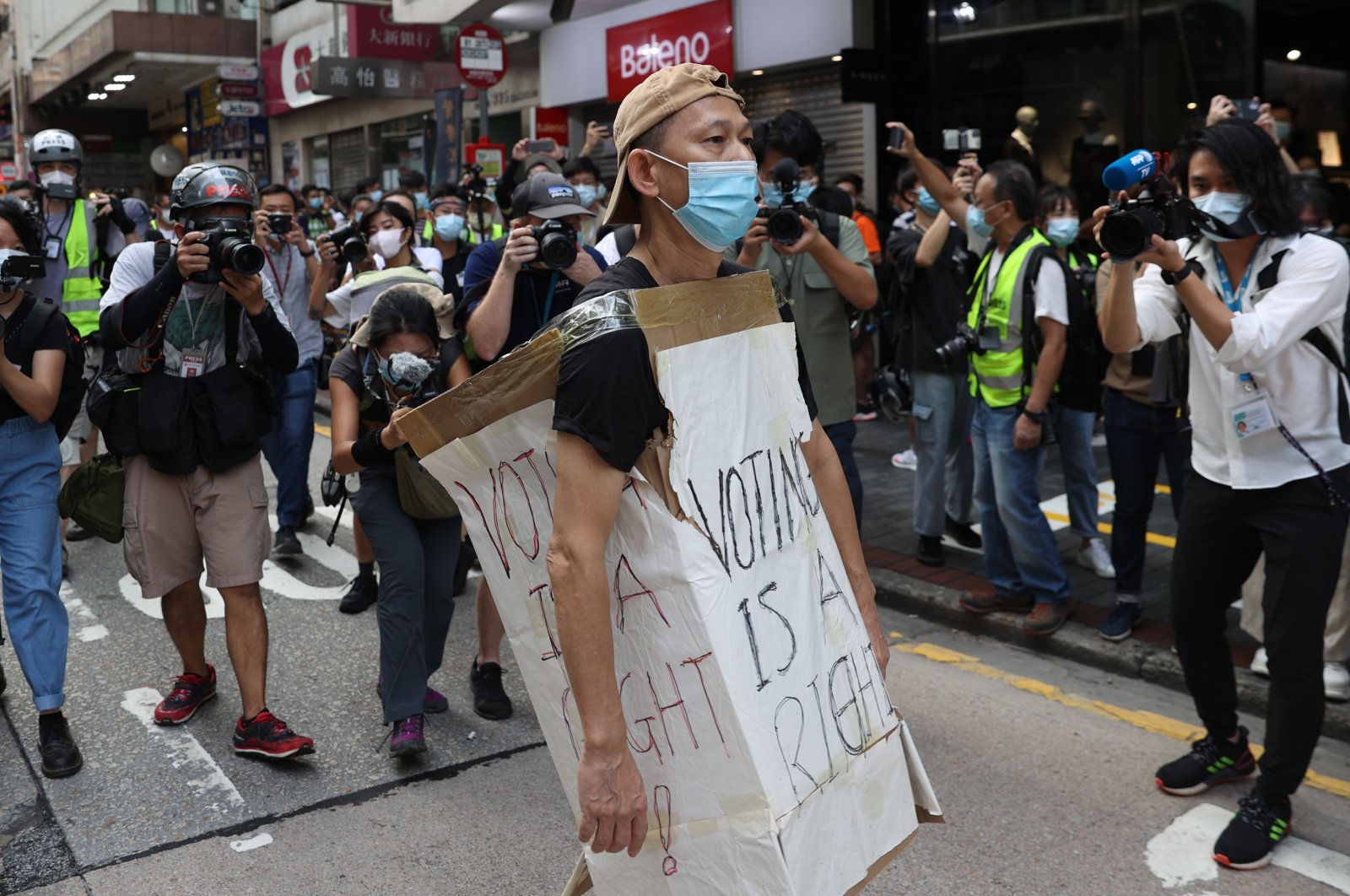 Hundreds of people have been arrested in Hong Kong for protesting the new national security law, as citizens demand the right to vote on the day the 2020 Legislative Council elections were originally due to take place.

At least two prominent activists, Figo Chan of the group Civil Human Rights Front and veteran legislator and democracy activist Leung Kwok-hung, known as "Long Hair," were among those arrested.

Videos posted on Twitter showed clusters of protesters being apprehended by police, with one group of young men being pepper-sprayed.

Elsewhere, a riot police officer could be seen haphazardly firing pepper balls at the ground while a colleague attempted to hold him back by the arm.

Protestors gathered, shouting, "Five demands, not one less," and called for Beijing to release 12 activists who were recently detained in China after they were caught trying to flee by boat to Taiwan.

According to local media group iCable, a bus driver was detained for "careless driving."

Roads were blocked, congested and overrun with chaos from the sheer number of protesters and police on the street, which caused major traffic congestion.

Video footage posted by Hong Kong University of Science and Technology Radio on Twitter showed a 12-year-old girl trying to run away from riot police, only to be tackled to the ground by five officers.

In response to the incident, police issued a statement that said the girl was apprehended as she fled and was being treated with suspicion.

The police said they used minimal force but video footage appears to show an officer charging into her, bringing her crashing to the ground.

Police then expressed concern about the participation of "underage girls in prohibited groups" and urged minors to stay away, in a post on their Facebook page.

Over the course of the day, officials raised a blue warning flag and purple national security violation flag for those chanting banned slogans and refusing to move.

They also used pepper balls which are fired by guns and break open releasing an irritant into the air, and pepper spray, which causes temporary blindness, massive irritation and makes breathing difficult.

Hong Kong has recorded 4,879 cases of the novel virus, with 94 deaths.

Ahead of the protests, officials had warned that they would deploy large numbers of riot police around the city.

Tempers have been running high since the authorities added the national security law into an annex of the city's mini-constitution, the basic law, in June.

Protests like Sunday's have not been seen since the introduction of the new law, which critics say has severely impinged on the rights and freedoms of those living in the city.

Lam has ignored requests to scrap the new law and to let the elections go ahead.