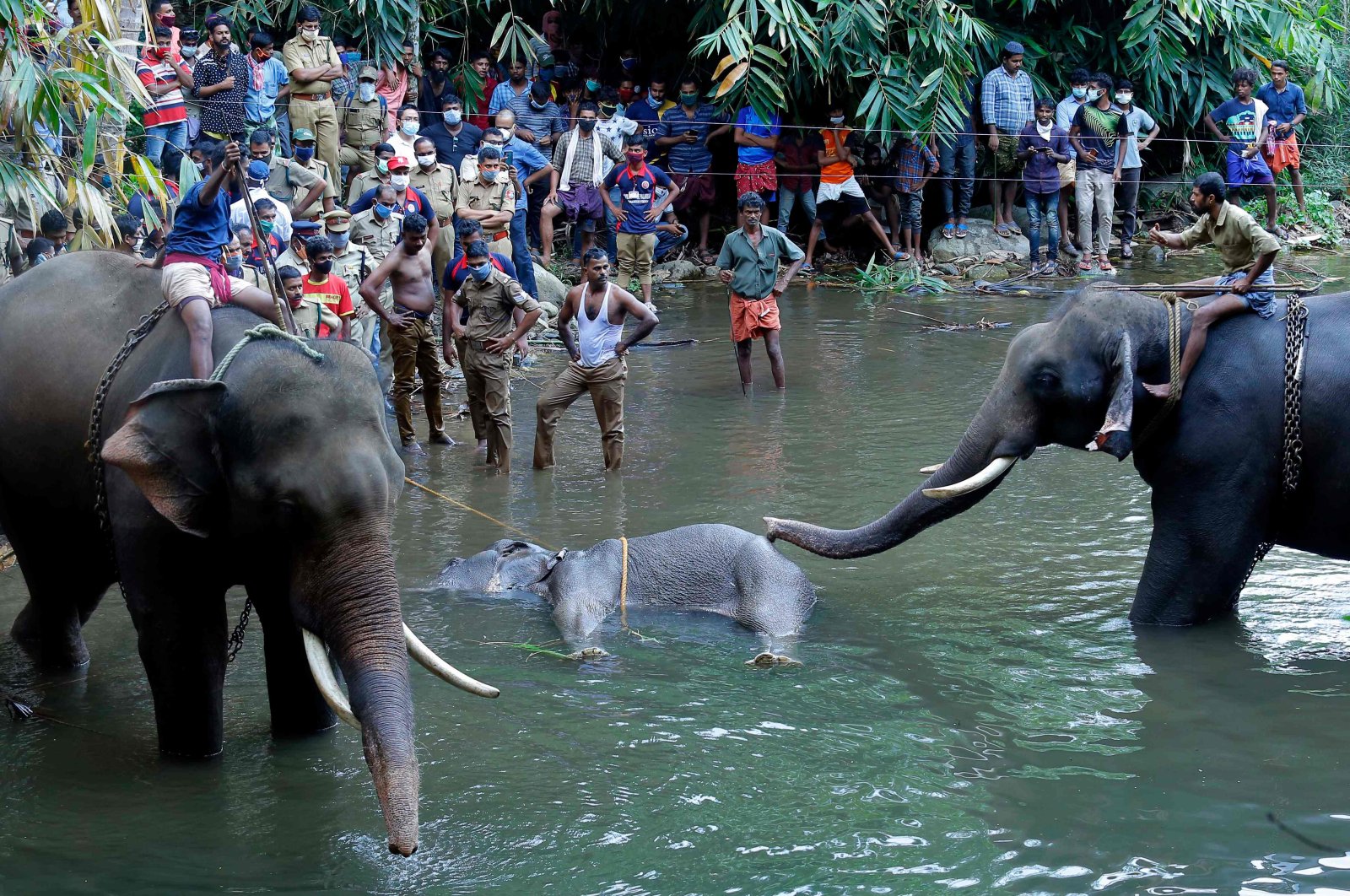 Policemen and onlookers stand on the banks of the Velliyar River in the Palakkad district of Kerala state as a dead wild elephant that was pregnant is retrieved following injuries caused by an explosive-filled pineapple, India, May 27, 2020. (AFP Photo)
by French Press Agency - AFP Jun 04, 2020 11:22 am
RECOMMENDED

A pregnant elephant was killed in India after eating fruit stuffed with explosives, officials said Wednesday, sparking outrage over the use of such traps to protect crops and homes.

The wild elephant strayed into a village near Silent Valley National Park in south Kerala state last Wednesday when it ate the rigged fruit believed to be a pineapple which exploded and severely injured its mouth, officials said.

"We are investigating the nature of the explosive and as well as the food fed to her," Kerala's chief wildlife warden, Surendra Kumar, told Agence France-Presse (AFP), adding local police were involved in the probe.

"We are investigating to find the people and circumstances that led to her death," he added.

Villagers in the region often use firecracker- or explosive-filled pineapples – which act like pressure-activated landmines – to protect their fields from wild animals.

A similar incident took place last month when a female elephant was found with serious mouth injures in a nearby district, Kumar said, adding that it too died of its injuries.

There was widespread outrage on social media after a forestry officer's Facebook post Saturday received almost 10,000 reactions or comments.

"She didn't harm a single human being even when she ran in searing pain in the streets of the village," Mohan Krishnan, wrote.

"She didn't crush a single home. This is why I said, she is full of goodness," he wrote.

Photos of the pachyderm shared on social media showed it standing in a river after the incident, dunking its mouth and trunk in the water hours before she died.

Two captive elephants were brought to lead it out of the river but it remained unmoved, said Krishnan, who led the rescue team.

India has lost vast swathes of forest to urbanization in recent decades, forcing animals closer to human settlements and resulting in an increasing number of encounters.

Some 2,361 people were killed in attacks by elephants between 2014 and 2019, according to data recorded by the government.

Some 510 elephants died in the same period, including 333 from electrocution and around another 100 from poaching and poisoning, the figures stated.