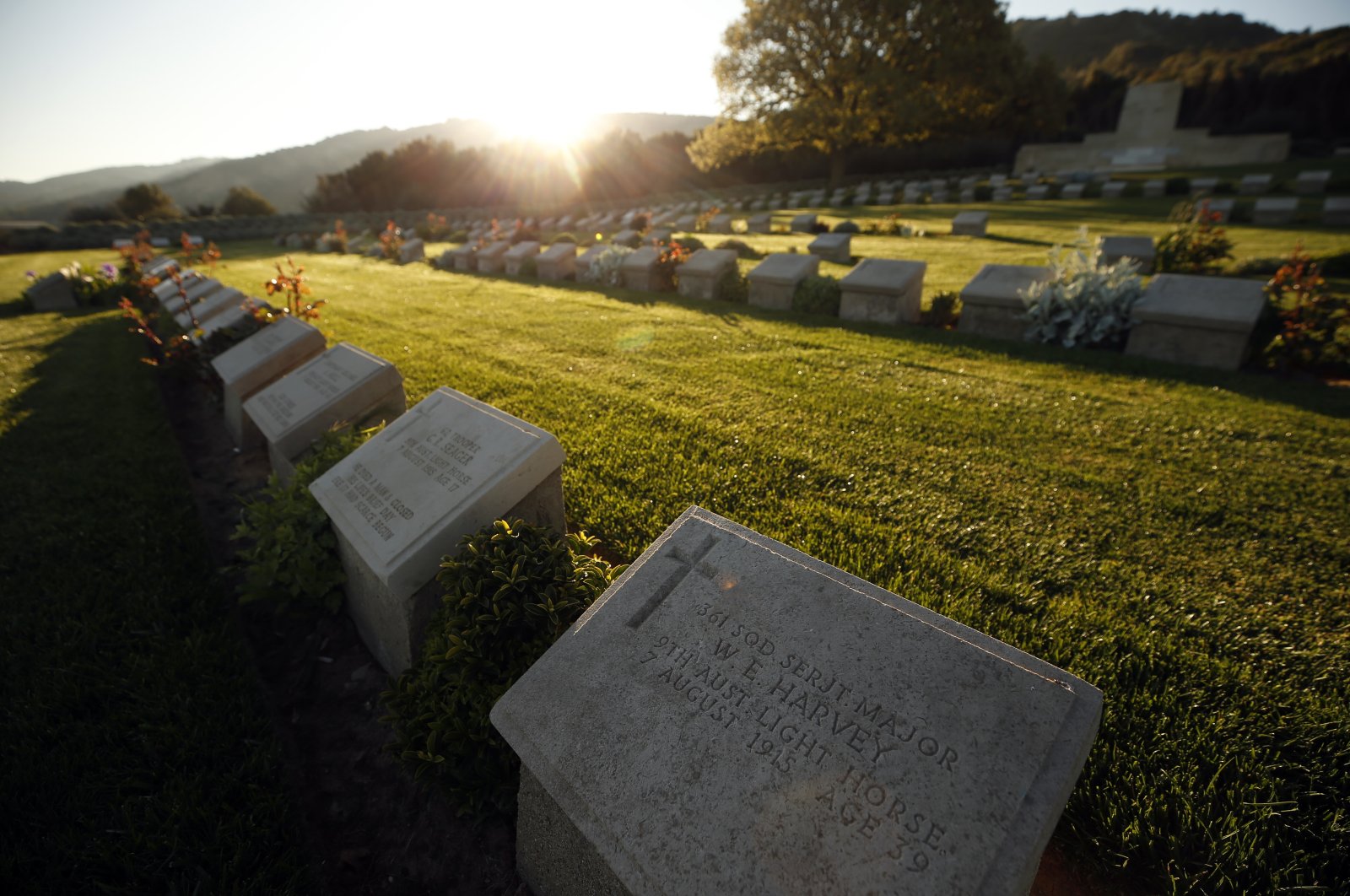 A view of the Anzac Cove cemetery by the site in Gallipoli peninsula of World War I landing of the ANZACs (Australian and New Zealand Army Corps) on April 25, 1915, in Çanakkale, Turkey, Saturday, April 25, 2020. (AP Photo)
by Daily Sabah with Agencies Apr 25, 2020 2:09 pm
RECOMMENDED

Thousands across Australia and New Zealand honored their countries' military personnel on Saturday in private ceremonies held in driveways and on balconies, as the coronavirus outbreak forced the majority of traditional Anzac Day memorials to be canceled for the first time in decades.

Each year on April 25, crowds typically gather at dawn services to commemorate the launch of the ill-fated Battle of Gallipoli during World War I, which in recent decades has become one of the most important national days for both countries.

On April 25, 1915, thousands of troops from the Australian and New Zealand Army Corps (usually referred to as the ANZACs) formed the majority of an Allied force that landed on the narrow beaches of Turkey's Gallipoli peninsula to launch a bloody campaign that would claim more than 130,000 lives, including some 10,000 Anzacs.

While the Gallipoli campaign against the Ottoman Turks failed, the landing date of April 25 has become a major day of remembrance in Australia and New Zealand, not just in commemoration of those fallen in Gallipoli but for troops killed in all military conflicts. The first Anzac Day parade was held in 1916, although broad public commemorations were canceled during the Spanish flu pandemic in 1919, the year following what was at the time dubbed "The Great War." Ceremonies were also greatly scaled back during World War Two.

Restrictions on public gatherings and the enforcement of social distancing in light of the coronavirus pandemic has meant that the usually packed dawn services in Australian cities and towns were replaced Saturday with candlelit vigils in driveways, with neighbors gathering to listen to buglers play “The Last Post.”

People also flocked to beaches to light candles to honor the country's military, which have fought in many worldwide conflicts.

"Our remembrances today, small, quiet and homely, will be," Australian Prime Minister Scott Morrison said in his address. He was one of just a handful of people allowed to attend a ceremony at the country's national war memorial in Canberra. A didgeridoo sounded the beginning of the service.

"Though our streets were empty, the returning veterans were not forgotten," Morrison said. "We have never forgotten them, and we never will."

In the Sydney suburb of Wahroonga, 8-year-old trumpeter Lewis Ketteridge and 16-year-old French horn player Grace Colville were among a dozen brass musicians playing “The Last Post” from their driveways at dawn before 40 residents observed a moment of silence.

“Strangely, it made it more moving that people were still willing to commemorate Anzac Day instead of just letting it go by,” said resident Catherine Colville.

She said the community carefully maintained social distancing as they placed candles, pictures of serving ancestors and wreaths of native leaves and flowers under an Australian flag hanging on a tree.

In New Zealand, where even tighter crowd restrictions are in place, Prime Minister Jacinda Ardern stood at dawn on the driveway of Premier House, the leader’s official residence, for a ceremony along with her fiance and his father on Saturday.

"This year a new threat faces all nations as the impact of the coronavirus deepens worldwide," Ardern said in an emailed statement.

"As we face these significant challenges, we remember the courage of those who have served in the name of peace and justice."


Thousands around New Zealand participated in the “Stand at Dawn” initiative, while in one Christchurch suburb, bagpiper Tom Glove greeted the families gathered at each driveway with a rendition of “Amazing Grace.”


Visiting the site in Çanakkale, in northwestern Turkey, has become a pilgrimage for many Australians and New Zealanders in order to pay their respects to fallen compatriots. However, the annual dawn service and other commemorative ceremonies were canceled this year to stem the spread of COVID-19. Early Saturday, three employees from a local tourism company placed red flowers at the ANZAC Cove memorial in Çanakkale.


Previously on Friday, a small Turkish delegation composed of local officials and military commanders paid their respects to the deceased from the Gallipoli land battles at the Martyrs’ Monument. The young commanders who oversaw an Ottoman victory in the battle, including Mustafa Kemal Atatürk, would go on to form the founding cadres of the Turkish republic – making Gallipoli one of the most celebrated events in modern Turkey. However, larger celebrations occur on March 18, when an Allied flotilla initially tried to sail through the Dardanelles towards but failed after heavy losses, thus leading to the catastrophic land campaign.


In a sad twist of fate, millions of Turks were also confined to their homes on Thursday, April 23, when the country marked its "National Sovereignty and Children's Day," one of Turkey's most important national holidays marking the establishment of Parliament in 1920.

In France, in the town of Villers-Bretonneux in the Somme, Deputy Mayor Benoit Decottegnie laid a wreath at sunrise at the Australian National Memorial that honors Australian soldiers who fought and died in France and Belgium.

With France in a coronavirus lockdown, there were no crowds. Decottegnie also laid a wreath at another monument to victims of World War I in the center of town.


“It is true that this ambiance is really particular. There is no one,” he said. “It is very, very, very frustrating, and I know that our Australian friends are also saddened by not being able to assist.”

“Of course, I hope that a lot of people will commemorate this by lighting a candle or by a minute of silence or by any other means,” Decottegnie said.

Australia and New Zealand both managed to curb coronavirus infections before the epidemic strained their public health systems, but officials of the two sparsely populated Pacific neighbors continue to worry.

New Zealand will next week ease some of the world’s strictest lockdown measures taken to tackle the pandemic, while Australia's strict social distancing rules remain in place.

Australia reported 20 new coronavirus cases on Saturday, which took its total to 6,687, according to health ministry data. There have been 80 deaths.

In New Zealand, there have been three new confirmed cases, bringing the total of infections to 1,117. Eighteen people have died, health ministry data showed.