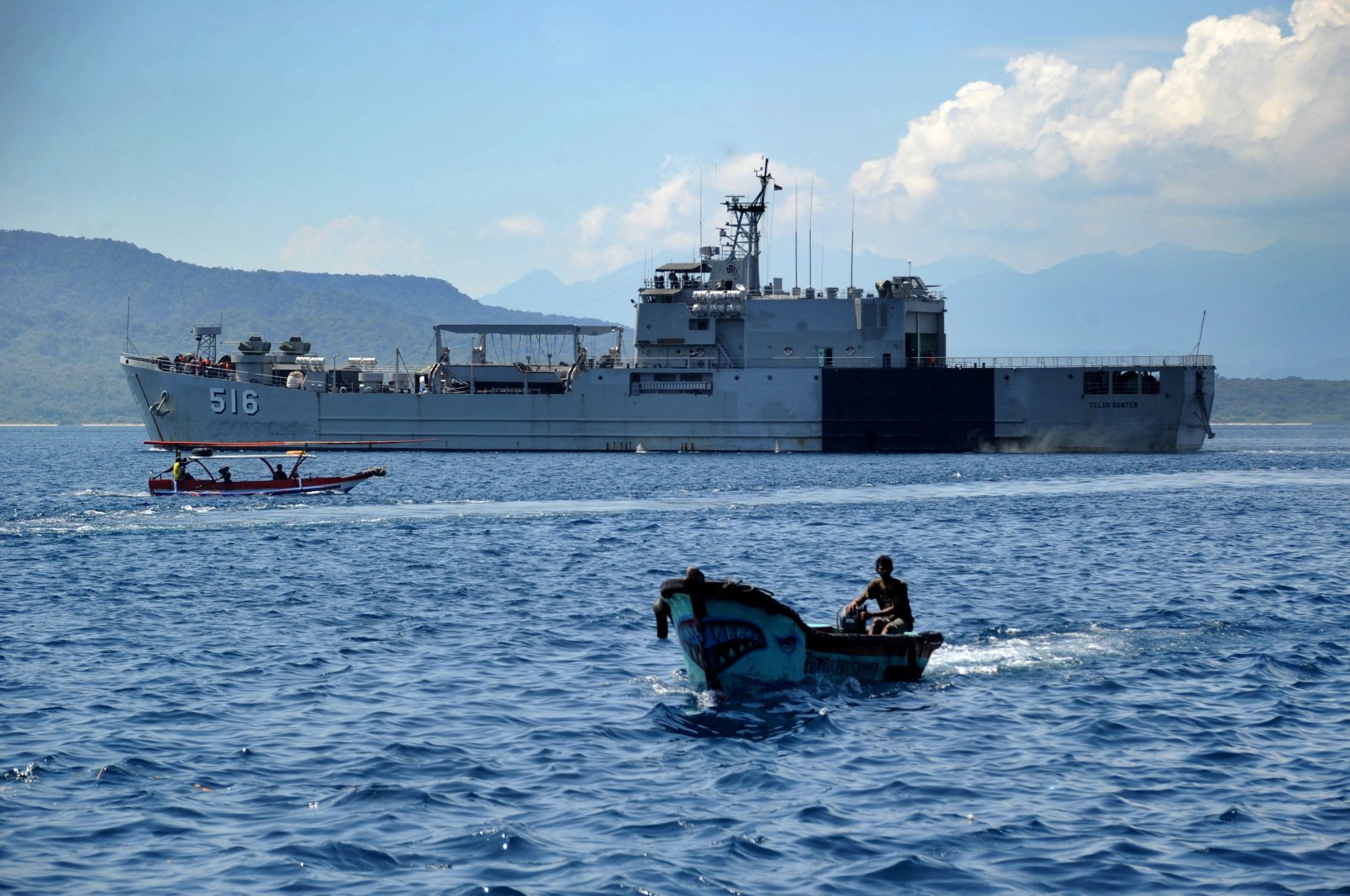 An Indonesian Navy ship sets off from the port of Tanjungwangi near the naval base in Banyuwangi, East Java province on April 25, 2021, as the military continues the search off the coast of neighboring Bali island for the navy's KRI Nanggala submarine that went missing April 21 during a training exercise. (AFP Photo)
by French Press Agency - AFP Apr 25, 2021 12:44 pm
RECOMMENDED

As debris recovered from a missing Indonesian submarine suggests that it broke apart as it sank, the hope for survivors off the coast of Bali has vanished, turning the rescue into a salvage mission on Sunday.

Warships, planes and hundreds of military personnel had led a frantic search for the KRI Nanggala 402 since it disappeared this week during training exercises, hoping for a miracle rescue before its known oxygen reserves ran out.

But the navy acknowledged Saturday that pieces of the submarine, including items from inside the vessel, had been retrieved.

They declared that it had sunk, effectively ending any chance of finding survivors.

Among the items recovered was a piece of the torpedo system and a bottle of grease used to lubricate periscopes.

They also found a prayer mat commonly used in Indonesia, the world's most populous Muslim-majority nation.

The relatives of First Lt. Muhammad Imam Adi, a 29-year-old father of a young son, clung to hope.

"My wish now is that my son and all the crew can be found," Adi's father Edy Sujianto said from his home on Java island.

"My son had wanted to become a soldier since he was a child. That was his dream."

"All Indonesians convey their deep sadness over this incident, especially to the families of the submarine crew," he said.

Authorities have not given an official explanation for the accident but said that the submarine may have suffered a blackout that left its crew unable to resurface.

Navy chief Yudo Margono discounted an explosion, however, saying Saturday that the evidence suggested the submarine came apart as it was crushed by water pressure at depths of more than 800 metres (2,600 feet) – well below what the German-built Nanggala was built to withstand.

"Submarine hulls are pressurised ... but when they're breached then water would come flooding inside," said Wisnu Wardhana, a maritime expert at Indonesia's Sepuluh Nopember Institute of Technology.

"Can you imagine if water with that kind of pressure hits people?"

Retired French vice-admiral Jean-Louis Vichot earlier told Agence France-Presse (AFP) that a submarine's steel shell could break "like a folding accordion" when it hits depths way beyond its limits.

On Sunday, the search team focused on pinpointing the sub's exact location.

Authorities have warned that any salvage operation would be risky and difficult in the deep waters.

Singapore's MV Swift Rescue – a submarine rescue vessel – has arrived to aid in the recovery effort, the navy said Sunday.

Neighbouring Malaysia, as well as the United States, India and Australia, were among the nations helping in the search.

Search vessels, reconnaissance aircraft and submarine rescue ships have been deployed to scour a zone of about 10 square nautical miles (34 square kilometers).

The submarine – one of five in Indonesia's fleet – disappeared early Wednesday while it was scheduled to do live torpedo training exercises off Bali.

The crew asked for permission to dive. It lost contact shortly after.

Later, search teams spotted an oil slick where the vessel was thought to have submerged, pointing to possible fuel-tank damage and a catastrophic accident.

So far, authorities have not commented on questions about whether the decades-old vessel was overloaded, but they have said that the submarine – delivered to Indonesia in 1981 – was seaworthy.

The model has been used by more than a dozen navies around the world.

But investigators would consider the Indonesian submarine's age as a potential factor, analysts have said.

The disaster was among a string of fatal submarine accidents over the past few decades.

Among the worst was the 2000 sinking of the Kursk, the pride of Russia's Northern Fleet.

That submarine was on manoeuvres in the Barents Sea when it sank with the loss of all 118 aboard. An inquiry found a torpedo had exploded, detonating all the others.

Most of its crew died instantly, but some survived for several days before suffocating.