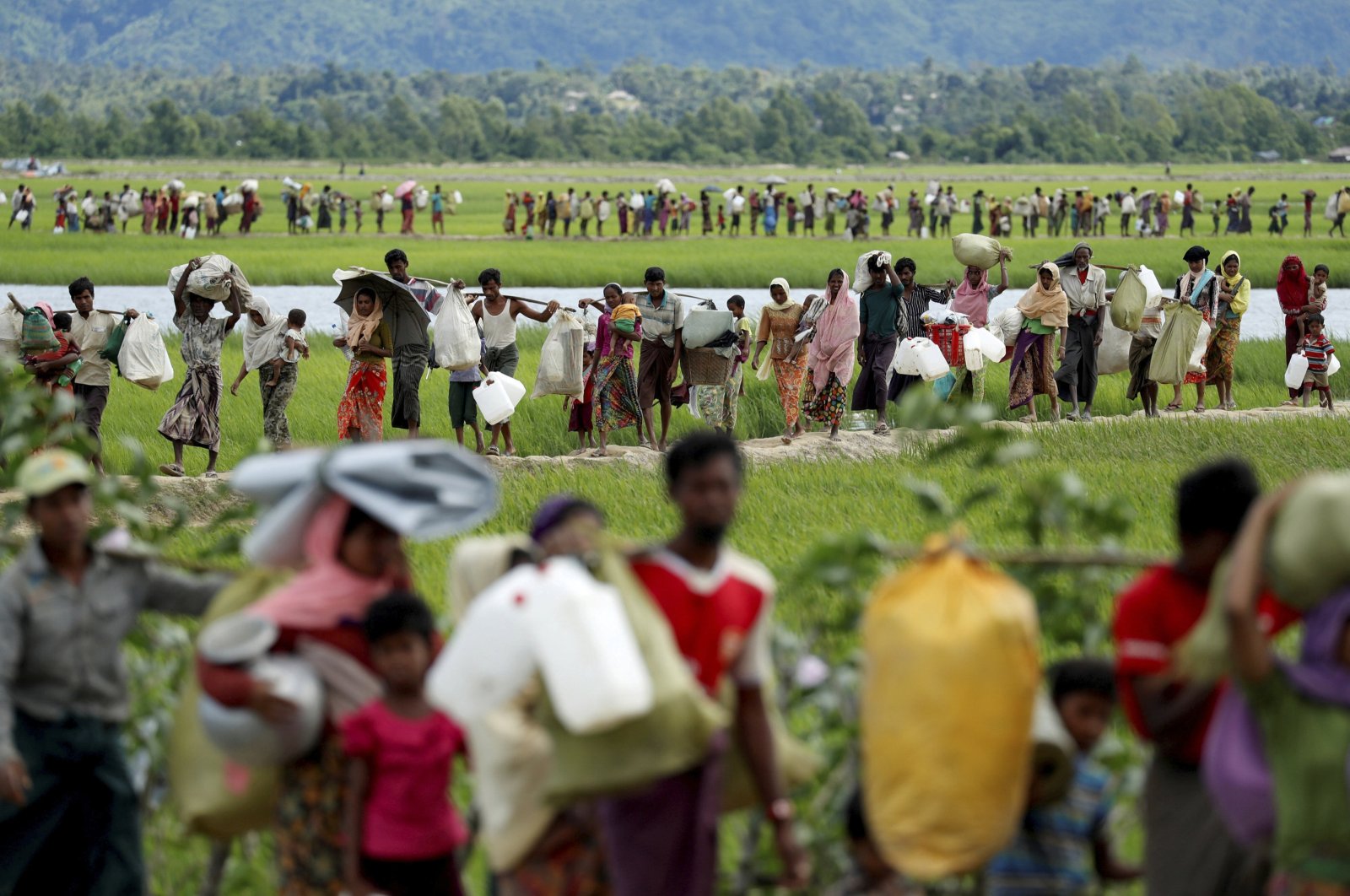 Rohingya refugees, who crossed the border from Myanmar two days before, walk after they received permission from the Bangladeshi army to continue on to the refugee camps, in Palang Khali, Bangladesh, Oct. 19, 2017. (Reuters Photo)
by Anadolu Agency
Oct 02, 2020 3:41 pm

Despite their own hardships, Rohingya refugees in Bangladesh have donated funds to help Buddhists displaced by the ongoing conflict in Myanmar's Rakhine state, leaders of the Rohingya community said Friday.

Nearly 200,000 people, mostly Buddhist civilians, have been displaced across Rakhine state since late 2018 when clashes started between the Myanmar Army and the Arakan Army, a Buddhist rebel group, according to media reports and rights groups.

"We all are human beings, and we and those Buddhists in Arakan (Rakhine) all belong to the same country, irrespective of our ethnic identities,” Mohammad Kamal Hossain, a Rohingya youth living at the Kutupalong refugee camp in Bangladesh's southeastern Cox's Bazar district, told Anadolu Agency (AA).

"They once shared our sorrows and helped us during the 2017 massacre (by the Myanmar military). Now we are doing what we can to support them in their time of need," he said.

Hossain said that 152 Rohingya youth, mostly students, collected donations from refugees in the Cox's Bazar camp, which is home to more than 1 million Rohingya refugees, over a period of two months.

Operating under the banner of the Arakan Altruism Society and Educational Network, they managed to raise 500,000 Myanmar kyat ($383) and the money was sent to the displaced Buddhists through their relatives, according to Hossain.

"We are always in contact with our friends in Rakhine and will always stand by our countrymen, regardless of our religious or ethnic identities,” he said.

Earlier in July, Rohingya students in Sittwe, the capital of Rakhine state, donated 300,000 Myanmar kyat to help the displaced population in the conflict zone.

Another Rohingya youth leader spoke of the community's desire to help their Buddhist friends who came to their aid during the Myanmar Army's brutal crackdown in 2017.

In August that year, Myanmar launched a military onslaught against Rohingya Muslims in the name of a clearance operation against a Rohingya rebel group, the Arakan Rohingya Salvation Army.

"Our Buddhist neighbors helped us during that harrowing time and allowed many of us to take shelter in their homes. Now, seeing them being forced from their homes, we can feel their pain,” Khin Maung, founder and executive director of the Rohingya Youth Association, told AA.

According to Amnesty International, the offensive forced more than 750,000 Rohingya, mostly women and children, to flee Myanmar and cross into Bangladesh, pushing the number of Rohingya refugees in Bangladesh to over 1.2 million. Since Aug. 25, 2017, nearly 24,000 Rohingya Muslims have been killed by Myanmar's state forces, according to a report by the Ontario International Development Agency (OIDA). Maung called for the international community to help restore peace in Rakhine and rehabilitate all displaced people, including Rohingya and Buddhists.

"For centuries, we (Rohingya and Buddhists) lived together peacefully in Arakan (Rakhine). We are determined to return to our homeland and bring back those days of peace and harmony,” he said.