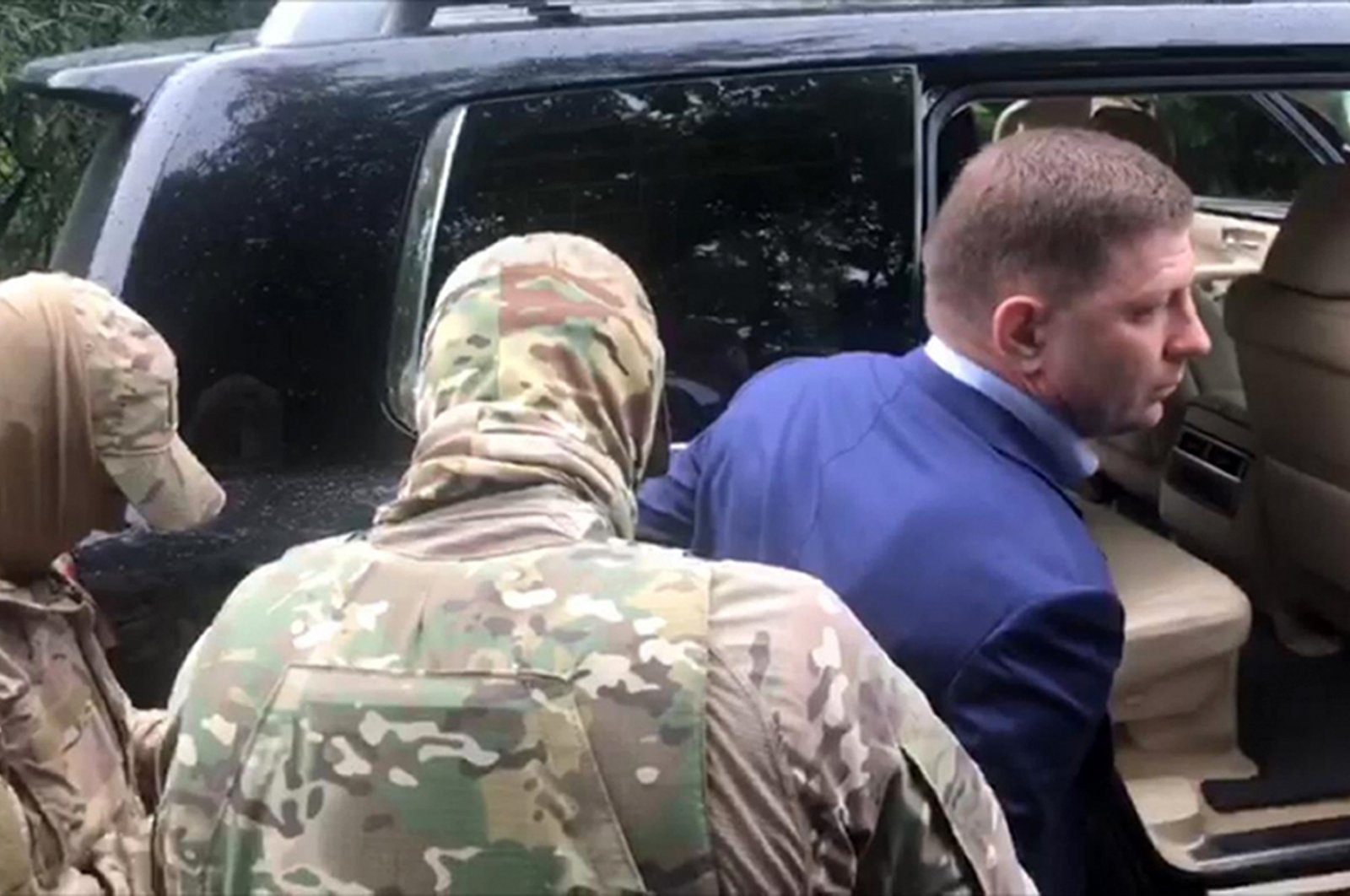 In this image distributed by the Investigative Committee of Russia (Sledkom), Sergei Furgal (R), the governor of the country's Khabarovsk region, is escorted by the Russian Federal Security Service (FSB) and Sledkom agents in Khabarovsk, Russia, July 9, 2020. (AP Photo)
by Agencies Jul 09, 2020 12:43 pm
RECOMMENDED

A provincial governor in Russia's far east has been arrested on charges of involvement in multiple murders, officials said Thursday.

Sergei Furgal, the governor of the Khabarovsk region along the border with China, was arrested and was flown to Moscow.

The Investigative Committee of Russia, the nation's top criminal examination agency that is referred to as Sledkom, said Furgal is accused of being involved in the murders of several businessmen in the region and nearby territories between 2004 and 2005.

Russian TV stations showed the video of Furgal's arrest, in which agents pull the 50-year-old governor out of his car, search him and drive him away.

Komsomolskaya Pravda, a daily tabloid newspaper, reported that the case concerns two murders and one attempted murder. One of the homicide victims was Furgal's former business partner.

Before becoming the governor of the Khabarovsk region in 2018, Furgal served as a federal lawmaker on the ticket of the Liberal Democratic Party (LDPR) for a decade. From 2015 to 2016, he headed the public health committee in the lower house of parliament.

The leader of the LDPR, Vladimir Zhirinovsky, criticized law-enforcement agencies over the arrest, arguing that there was no need to put Furgal in handcuffs.

The charges against Furgal date back to the period when he worked as a businessman with interests ranging from imports of consumer goods to timber and metals before launching his political career.

Following the 1991 Soviet collapse, Russia plunged into violent turf battles between rival criminal clans for control over business assets and contract murders of businessmen were a regular occurrence during the 1990s and the early 2000s.

Furgal was detained close to his home as he prepared to leave for work, the governor's press service wrote on his Instagram page.

Alexander Khinshtein, the head of the information and communications committee in the lower house of parliament, said that Russian law-enforcement agencies long had been aware of Furgal's alleged criminal connections.

"I'm not surprised about his arrest, I'm surprised that it happened so late," he tweeted.