South Korea heads to polls in shadow of coronavirus 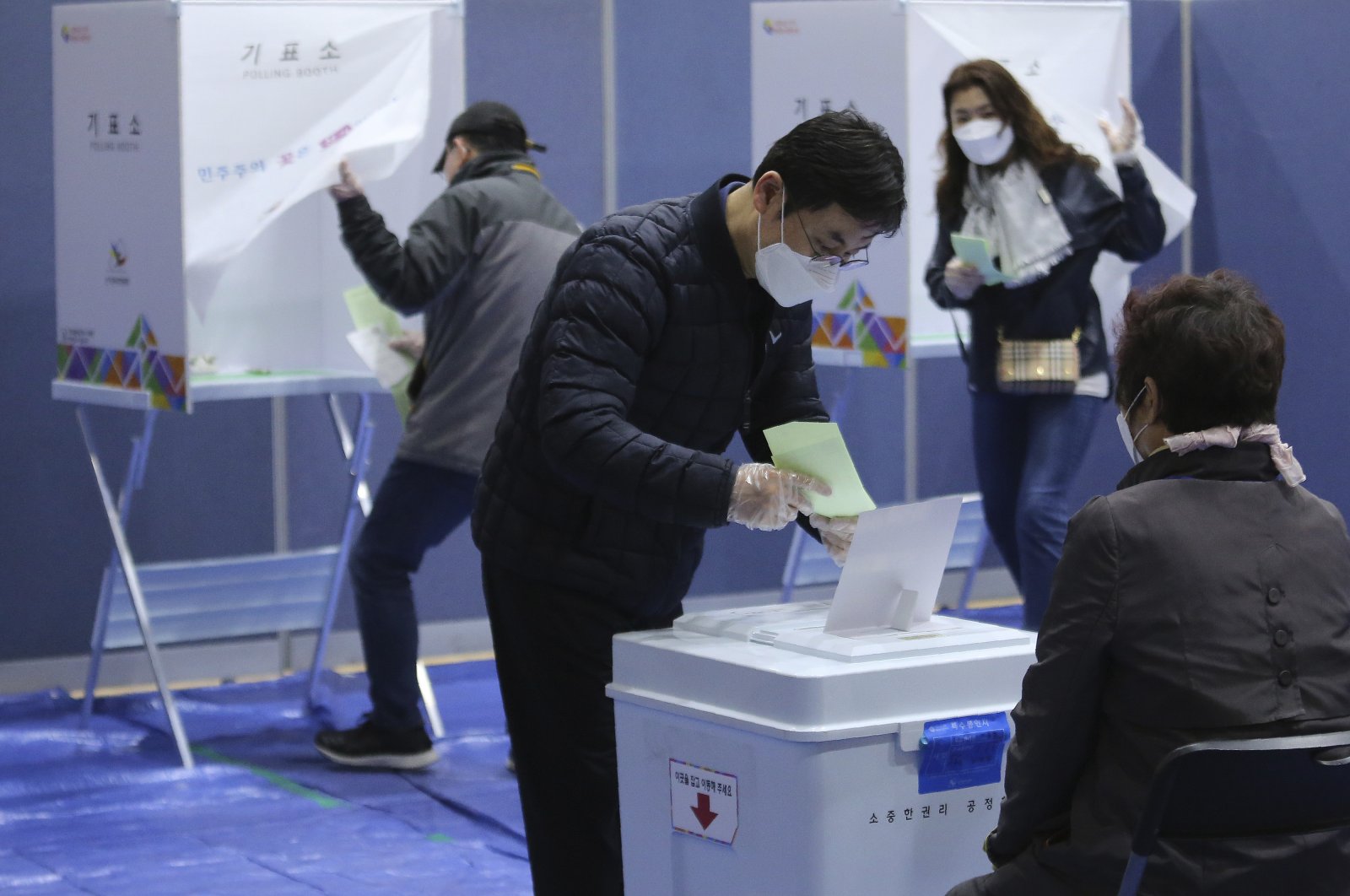 A man wearing a face mask to help protect against the spread of the new coronavirus casts his vote for the parliamentary election at a polling station in Seoul, South Korea, April 15, 2020. (AP Photo)
by Associated Press Apr 15, 2020 10:03 am
RECOMMENDED

South Korean voters wore masks and moved slowly between lines of tape at polling stations on Wednesday to elect lawmakers in the shadows of the spreading coronavirus.

The government resisted calls to postpone the parliamentary elections billed as a midterm referendum for President Moon Jae-in, who enters the final years of his term grappling with a historic public health crisis that is unleashing massive economic shock.

While South Korea’s electorate is deeply divided along ideological and generational lines and regional loyalties, recent surveys showed growing support for Moon and his liberal party, reflecting the public's approval of an aggressive test-and-quarantine program so far credited for lower fatality rates compared to China, Europe and North America.

“We are going through difficult times, but the coronavirus and politics are two different things,” said voter Lee Kum.

Another Seoul resident, Chung Eun-young, said she arrived at her polling station just after 6 a.m. to avoid crowds.

“I was worried about the coronavirus,” she said. “They checked my temperature and handed me gloves, but it wasn’t as bothersome as I thought it would be."

The long lines that snaked around public offices and schools followed record-high participation in early voting held on Friday and Saturday, and defied expectations of low turnout to minimize social contact.

The National Election Commission said 11.4 million people voted as of 2 p.m., which brought the overall turnout to 53% combined with the 11.8 million who cast their ballots during early voting or by mail.

The voting in South Korea draws contrast with an upended election cycle in the United States, where some states pushed back presidential primaries or switched to voting by mail.

To hold the parliamentary elections as scheduled, South Korean officials and health authorities drew up a deliberate set of preventive measures to reduce risks of the virus being transmitted.

Duct tape or stickers marked a meter (3 feet) of social-distancing space from nearby streets to ballot booths. Masked poll workers checked temperatures of arrivals and whisked anyone with a fever or not wearing a mask to separate areas to vote, sanitizing the facilities after they do. Voters who passed the fever screening got sanitizing gel and disposable plastic gloves before entering booths.

The government also mapped out a voting process for those quarantined at their homes, a number that ballooned after the country began enforcing two-week quarantines on all arrivals from overseas on April 1.

Officials texted eligible voters in self-quarantine before the vote and about 13,000 affirmed they wanted to participate. Those without fever or respiratory symptoms can temporarily leave their homes from 5:20 p.m. to 7 p.m. so they could cast their ballots after 6 p.m., when polling stations close for other voters.

They will be escorted or monitored through tracking apps and must maintain a 2-meter (6 feet) distance at polling places, while workers fully dressed in protective suits will disinfect booths after each of them votes.

Hospitalized patients were able to vote by mail if they had applied. Around 400 of the mildly ill voted at temporary shelters during last week’s early voting.

South Korea has confirmed more than 10,590 infections and 225 deaths from COVID-19 with new cases declining in recent weeks. But there’s concern about rising infections in the densely populated Seoul metropolitan area and worries that crowds at parks and on mass transportation may indicate a relaxing of social distancing.

“Please do exercise your valuable rights by voting, but also refrain from other gatherings or activities that involve multiple people in confined spaces,” Health Ministry official Yoon Tae-ho said.

While dozens of parties have registered candidates, the elections are seen largely as a two-way race between Moon’s ruling Democratic Party and the main conservative opposition United Future Party. Both have registered satellite parties in a bid to win more proportional representative seats.

Just three years ago, mass protests ousted Moon’s corrupt predecessor, but public displays of South Korea's dynamic democracy were muted this year by the virus. Candidates, wearing masks and gloves, avoided large rallies and handshakes. Things were more heated on the internet, which overflowed with bitter exchanges between supporters of Moon and his conservative opponents, who accuse the government of economic and foreign policy failures and botching the financial response to the epidemic.

Moon held three summits with North Korean leader Kim Jong Un in 2018, but the North in recent months severed virtually all cooperation with the South amid a stalemate in larger nuclear negotiations with the United States. The North has also been dialing up weapons tests and fired a barrage of missiles into the sea on Tuesday.

“If the opposition wins, Moon will likely become a lame duck, and party politics will quickly pivot to preparing for the 2022 presidential elections,” she said.