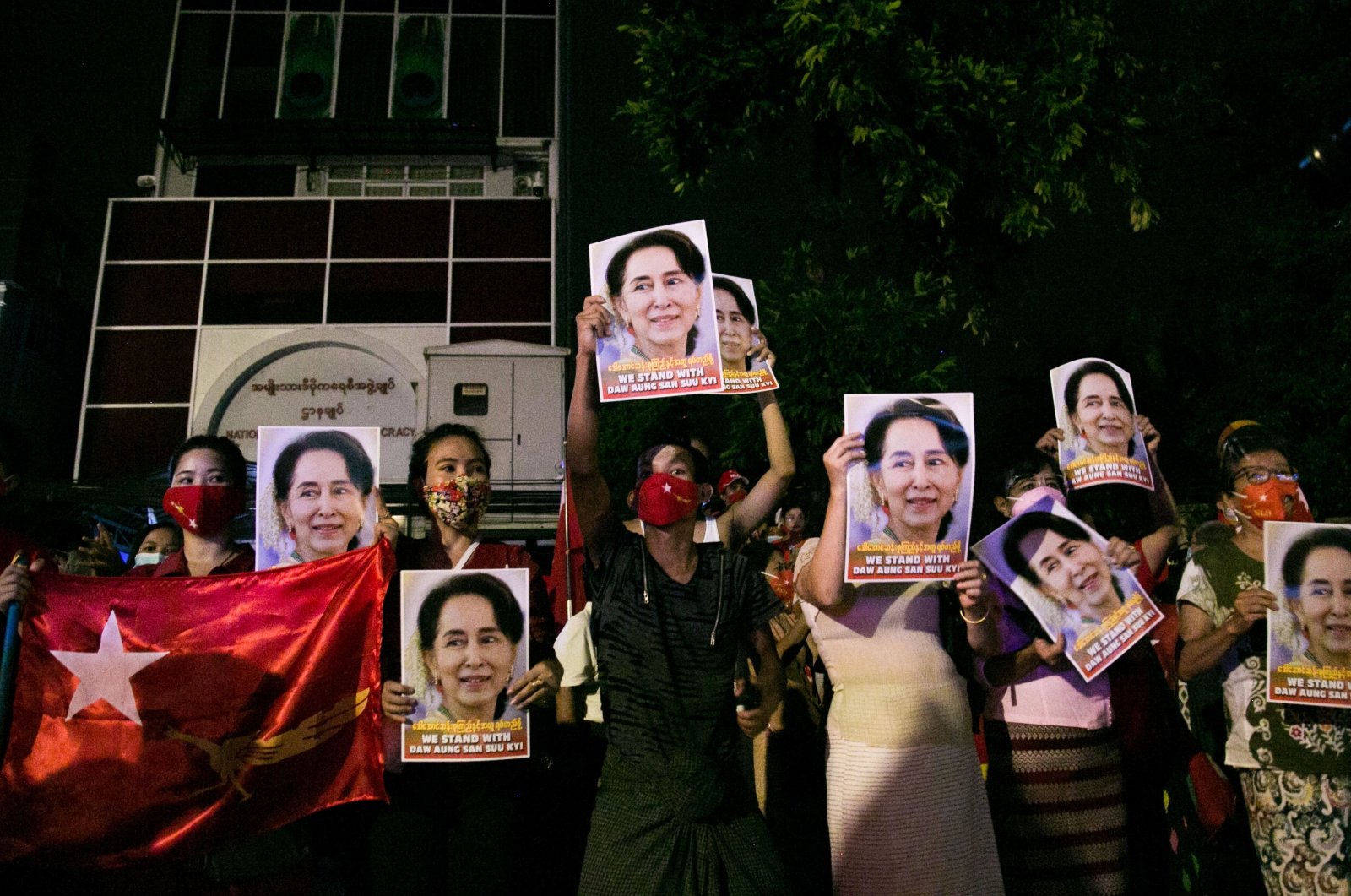 Supporters of the National League for Democracy (NLD) party hold portraits of Aung San Suu Kyi as they celebrate the unofficial election results in front of the party's headquarters in Yangon, Myanmar, Nov. 9, 2020. (AFP Photo)
by French Press Agency - AFP Nov 13, 2020 10:15 am
RECOMMENDED

Aung San Suu Kyi's ruling party secured an absolute majority in Myanmar's election, official results showed Friday, in a poll disputed by the military-aligned opposition and criticized by rights groups over the disenfranchisement of Rohingya Muslims and other ethnic minorities.

Her National League for Democracy (NLD) had already declared a landslide victory based on its own tallies, prompting street celebrations by supporters.

But official figures were still being returned five days after the ballot, only the second such polls since the nation emerged from outright military rule in 2011.

Results announced by the election commission on Friday showed the NLD had won 368 seats – more than 50% of parliament, even taking into account the quarter of seats reserved for the military under the constitution.

The party is on track to improve on its landslide win in 2015, despite widespread disillusionment in many ethnic minority areas.

"People clearly realized the need for the NLD to get enough votes to form a government on their own," NLD spokesman Myo Nyunt told Agence France-Presse (AFP), adding this would help "minimize political conflict."

The military-aligned opposition Union Solidarity and Development Party (USDP) has been trounced across the country, winning just 25 seats by Friday.

The party alleges the vote was neither free nor fair and is demanding that the Union Election Commission (UEC) steps down and polls are rerun.

Yangon-based analyst Khin Zaw Win warned the coming months will be messy, adding the situation was a consequence of the UEC being filled with "yes-men and incompetents."

Under the constitution, the government appoints all commission members.

But even if some results were overturned, "the NLD landslide is so large that they wouldn't alter the overall outcome," said Richard Horsey from the International Crisis Group.

Japan, India and Singapore have already congratulated Suu Kyi and her party.

Observers widely concluded that voting took place smoothly on the day, despite forecasts of a low turnout due to a recent surge of coronavirus cases.

But they condemned what they described as the election commission's lack of transparency and its cancellation of the polls across many ethnic minority areas – ostensibly for security reasons.

The move left 1.5 million voters disenfranchised, sparking grievances in already restive areas that the playing field had been tilted in favor of the NLD.

The NLD wrote Thursday to all ethnic minority political parties, promising it would "prioritize" their wishes.

But some will conclude the electoral process does not work for them and choose "political insurrection or insurgency instead," warned Horsey.

Tension is particularly high in western Rakhine state, where fighting between ethnic Rakhine militant group, the Arakan Army (AA), and the military has already displaced 200,000.

In unprecedented communication between the foes, the AA requested the army and government hold by-elections as soon as possible in areas where the vote had been canceled – a statement welcomed by the military.

Even though Suu Kyi's international reputation was badly hurt over the Rohingya crisis – for which the country now faces charges of genocide – she remains widely revered within Myanmar.