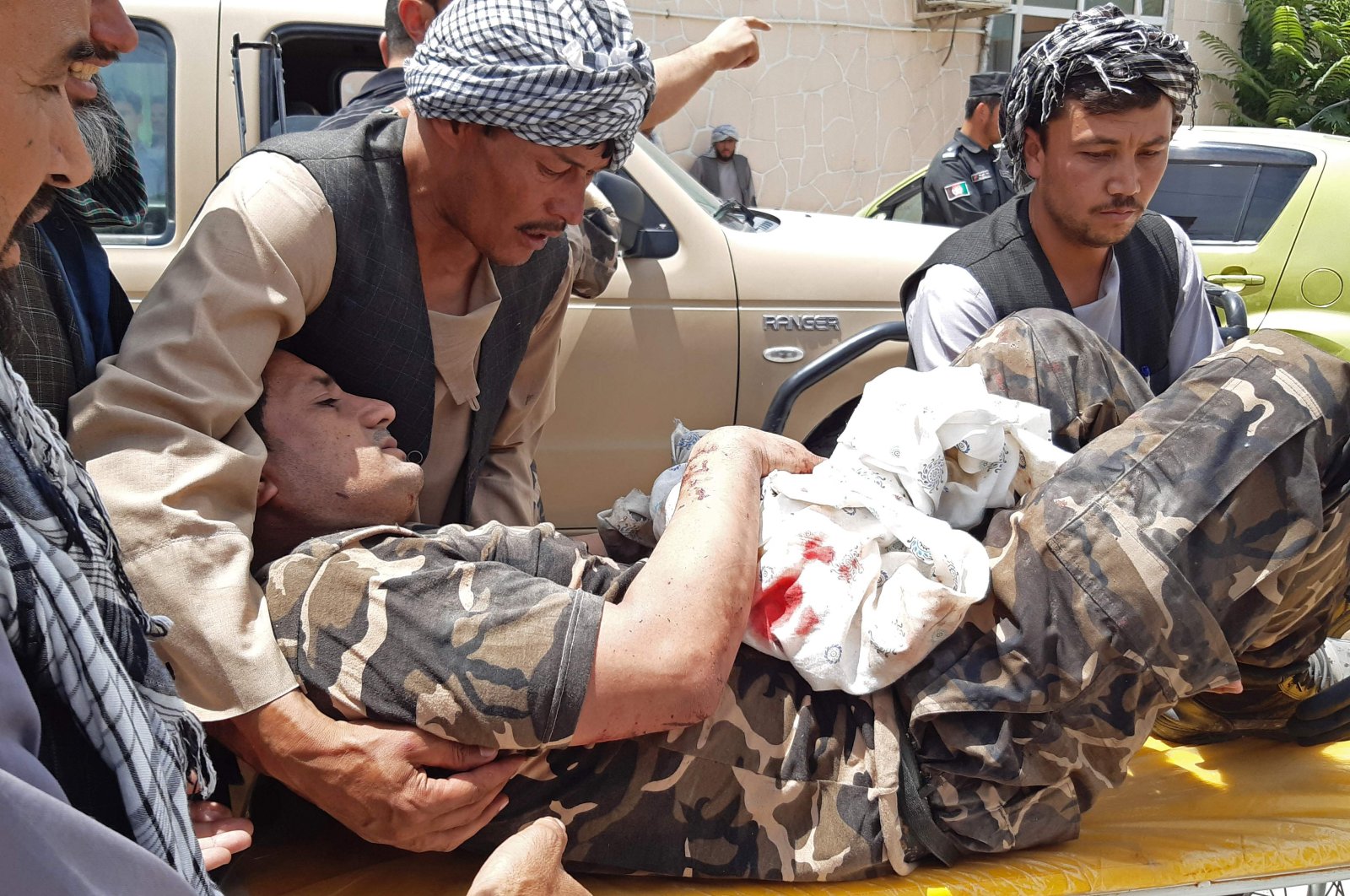 A wounded National Directorate of Security (NDS) personnel is brought on a stretcher to a hospital after a car bomb exploded in Aybak, northern Samangan province, Afghanistan, July 13, 2020. (AFP Photo)
by ASSOCIATED PRESS Jul 13, 2020 2:03 pm
RECOMMENDED

The attack took place in Aybak, the provincial capital of Samangan. Raz Mohammad Khan, a provincial council member, said the nine dead included a woman. He said there were 63 wounded but warned those were only initial figures and that the casualty toll could rise further.

At least two Taliban attackers were killed in the shootout, Khan added.

Earlier, a provincial hospital chief, Abdul Khalil Musadiq, said at least 43 wounded – mostly civilians, including children – were taken to hospitals in the area.

The bomber targeted the intelligence service department in Aybak and the explosion was a signal for other Taliban fighters to storm in and engage in a shootout with Afghan forces, according to Mohammad Hashim Sarwari, deputy chief for the provincial council.

He said the blast was so strong it was heard miles away and damaged buildings and homes within a wide radius.

Zabihullah Mujahid, a Taliban spokesman, said the Taliban – who are active in the province and have recently stepped up attacks there – was behind the bombing and the attack.

The fighting lasted for a number of hours, with details remaining sketchy given the remoteness of the area. Samangan has seen an uptick in Taliban attacks but there have also been clashes between rival warlords in the area, while other militants, mostly Uzbeks, are also active there.

On Sunday, the Taliban attacked checkpoints in northern Kunduz province, killing at least 14 members of the Afghan security forces, according to Esmatullah Muradi, a spokesman for the provincial governor.

In Imam Sahib district, the Taliban killed eight policemen, while in the Chardara district they gunned down three soldiers and three pro-government fighters, he said. Reinforcements were sent late on Sunday and fighting continued until Monday morning.

The Taliban said they were behind the attacks but claimed that government forces fired mortars in response, hitting civilian homes – a claimed that was dismissed by the Ministry of Defense.

The Taliban and government forces have been trading blame over a recent surge in attacks across Afghanistan – even as efforts continue to try and bring about the start of direct peace talks between Kabul and the insurgents.

The Taliban accuses government forces of targeting them in their homes, with their families bearing the brunt of those operations. Kabul, meanwhile, has accused the Taliban of stepping up attacks against both civilians and the security forces.