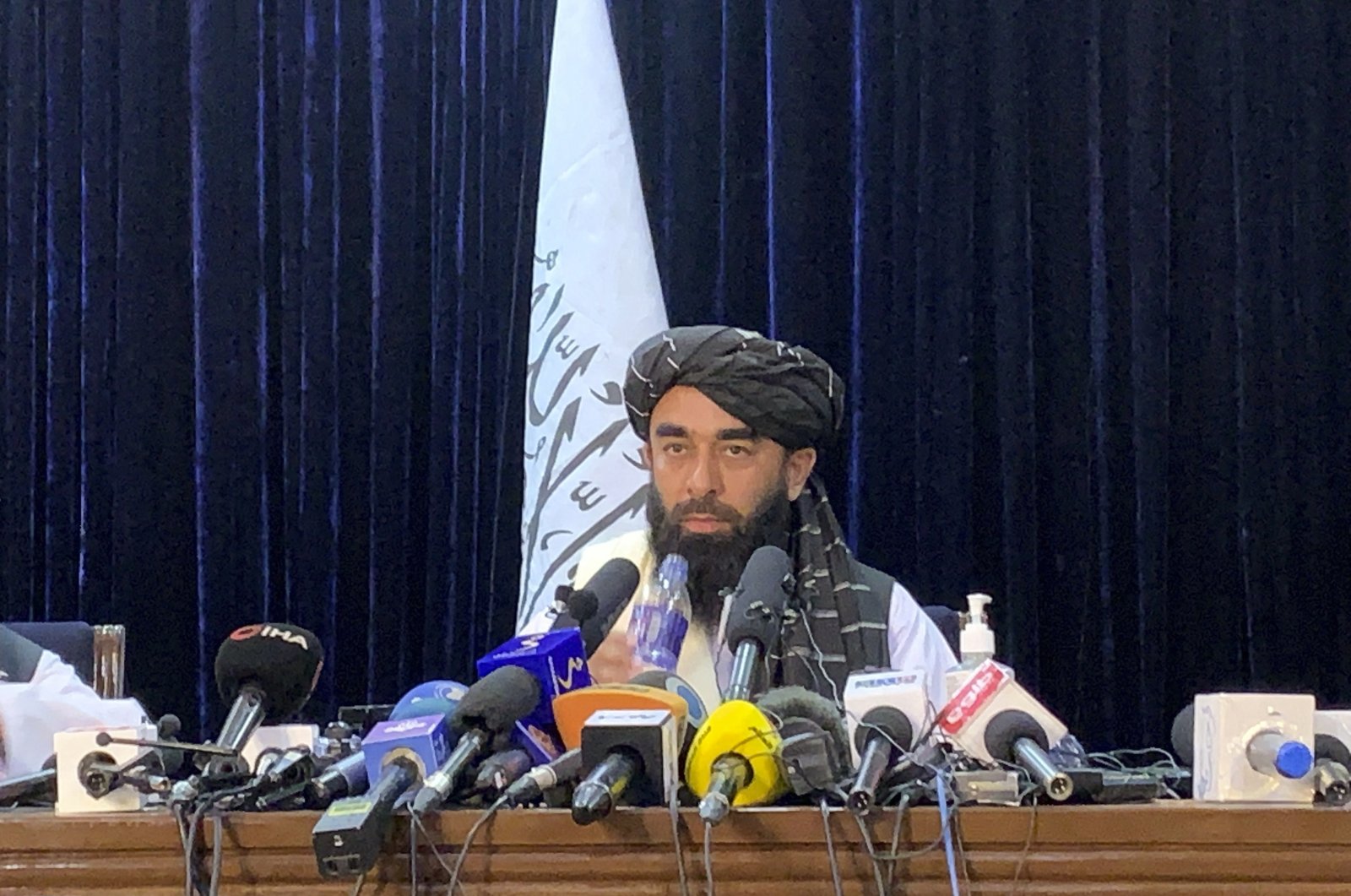 A Taliban spokesperson Tuesday said Afghanistan is now "emancipated," pledging to secure the country after the militia group took over control following a blitz that lasted over a week.

Zabihullah Mujahid made the comment at his first news conference. For years, he had been a shadowy figure issuing statements on behalf of the militants.

He said the Taliban sought no revenge and that “everyone is forgiven.”

The spokesperson assured that no one from the United States or the international community will be harmed. The militant group is committed to the rights of women within the framework of “Sharia,” he emphasized, noting that women will have rights and will be able to “benefit from those rights,” participating in education, health and other areas.

Thousands of soldiers who fought against the Taliban for 20 years are also “pardoned,” the group ensured, as well as the translators and contractors who have worked for foreign powers and “there will be no revenge.”

Mujahid has also assured that no will be allowed to use Afghan territory for attacks against any nation.

The Taliban have declared an “amnesty” across the country and urged women to join its government.

The first hours of the Taliban’s return to rule saw chaos in the Afghan capital as many flocked into the airport to leave the country while the militia group now tries to calm nerves, seeking to convince a wary population that they have changed. Foreign officials have said they will wait to see if the Taliban make good on their promises.

Following a blitz across Afghanistan that saw many cities fall to the militia without a fight, the Taliban have sought to portray themselves as more moderate than when they imposed rule in the late 1990s. But many Afghans remain skeptical.

Older generations remember the Taliban’s views – who had a harsh interpretation of Islamic law which included severe restrictions on women – before they were ousted by the U.S-led invasion following the Sept. 11, 2001, terror attacks.

The capital of Kabul remained quiet for another day as the Taliban patrolled its streets and many residents stayed home, who remain fearful after the militant group takeover saw prisons emptied and armories looted. Many women have expressed dread that the two-decade Western experiment to expand their rights and remake Afghanistan would not survive the resurgent Taliban.

Germany, meanwhile, halted development aid to Afghanistan over the Taliban takeover. Such aid is a crucial source of funding for the country – and the Taliban's efforts to project a milder version of themselves may be aimed at ensuring that money continues to flow.

The promises of amnesty from Enamullah Samangani, a member of the Taliban's cultural commission, were the first comments on how the Taliban might govern on a national level. His remarks remained vague, however, as the Taliban are still negotiating with political leaders of the country’s fallen government and no formal handover deal has been announced.

“The Islamic Emirate of Afghanistan with full dignity and honesty has announced a complete amnesty for all Afghanistan, especially those who were with the opposition or supported the occupiers over the years and recently,” he said.

Other Taliban leaders have said they won’t seek revenge on those who worked with the Afghan government or foreign countries.

But some in Kabul allege Taliban fighters have lists of people who cooperated with the government and are seeking them out. A broadcaster in Afghanistan said she was hiding at a relative’s house, too frightened to return home much less return to work following reports that the insurgents are also looking for journalists. She said she and other women did not believe the Taliban had changed their ways. She spoke on condition of anonymity because she feared for her safety.

Samangani addressed the concerns of women, saying they were “the main victims of the more than 40 years of crisis in Afghanistan.”

"The Islamic Emirate of Afghanistan is ready to provide women with the environment to work and study, and the presence of women in different (government) structures according to Islamic law and in accordance with our cultural values,” he said.

That would be a marked departure from the last time the Taliban were in power, when women were largely confined to their homes. Samangani did not describe exactly what he meant by Islamic law, implying people already knew the rules.

In another sign of the Taliban's efforts to portray a new image, a female television anchor on the private broadcaster Tolo interviewed a Taliban official on camera Tuesday in a studio – an interaction that once would have been unthinkable. Meanwhile, women in hijabs demonstrated briefly in Kabul, holding signs demanding the Taliban not “eliminate women” from public life.

Rupert Colville, a spokesperson for the Office of the United Nations High Commissioner for Human Rights (OHCHR), noted both the Taliban’s vows and the fears of everyday Afghans.

“Such promises will need to be honored, and for the time being – again understandably, given past history – these declarations have been greeted with some skepticism,” he said in a statement. “There have been many hard-won advances in human rights over the past two decades. The rights of all Afghans must be defended,” the statement read.

Germany suspended development aid to Afghanistan, estimated at 250 million euros ($294 million) for 2021. Other funding goes separately to security services and humanitarian aid. Sweden indicated it would slow aid to the country, but Britain committed to an increase.

British Foreign Secretary Dominic Raab said humanitarian aid could rise by 10%. He said the aid budget would be reconfigured for development and humanitarian purposes and that the Taliban would not get any money previously earmarked for security.

Meanwhile, Kabul Hamid Karzai International Airport, the only way out for many, reopened to military evacuation flights under the watch of U.S. troops.

All flights were suspended Monday when thousands of people rushed to the airport, desperate to leave the country. In shocking scenes captured on video, some clung to a plane as it took off and then fell to their deaths. At least seven people died in chaos at the airport, U.S. officials said.

“I see airplanes landing and taking off,” he wrote on Twitter.

Still, there were indications that the situation remained tenuous. The U.S. Embassy in Kabul, now operating from the airport, urged Americans to register online for evacuations but not come to the airport before being contacted.

The German Foreign Ministry said its first German military transport plane landed in Kabul, but it took off with only seven people on board due to continued chaos. Another left later with 125 people.

By late Tuesday, the Taliban entered the civilian half of the airport, firing into the air to drive out around 500 people there, said an Afghan official who spoke on condition of anonymity because he wasn't authorized to brief journalists. That crowd ended up outside of the airport in a nearby roundabout.

Across Afghanistan, the International Committee of the Red Cross said thousands had been wounded in fighting as the Taliban swept across the country in recent days, ahead of the planned withdrawal of the last American troops at the end of the month.

As U.S. President Joe Biden did, NATO Secretary-General Jens Stoltenberg also blamed the swift collapse of the country on a failure of Afghan leadership. But he added that the alliance must also uncover flaws in its effort to train the Afghan military.

Talks continued Tuesday between the Taliban and several Afghan government officials, including former President Hamid Karzai and Abdullah Abdullah, who once headed the country’s negotiating council.

Discussions focused on how a Taliban-dominated government would operate given the changes in Afghanistan over the last 20 years, rather than just dividing up who controlled what ministries, officials with knowledge of the negotiations said. They spoke on condition of anonymity to discuss confidential details of the talks.

A top Taliban leader, mullah Abdul Ghani Baradar, arrived in Kandahar Tuesday night from Qatar. His arrival may signal a deal is close at hand.

But in a possible complication, the vice president of the ousted government claimed on Twitter Tuesday that he was the country's “legitimate” caretaker president. Amrullah Saleh said, under the Afghan Constitution, he should be in charge because President Ashraf Ghani has fled the country.