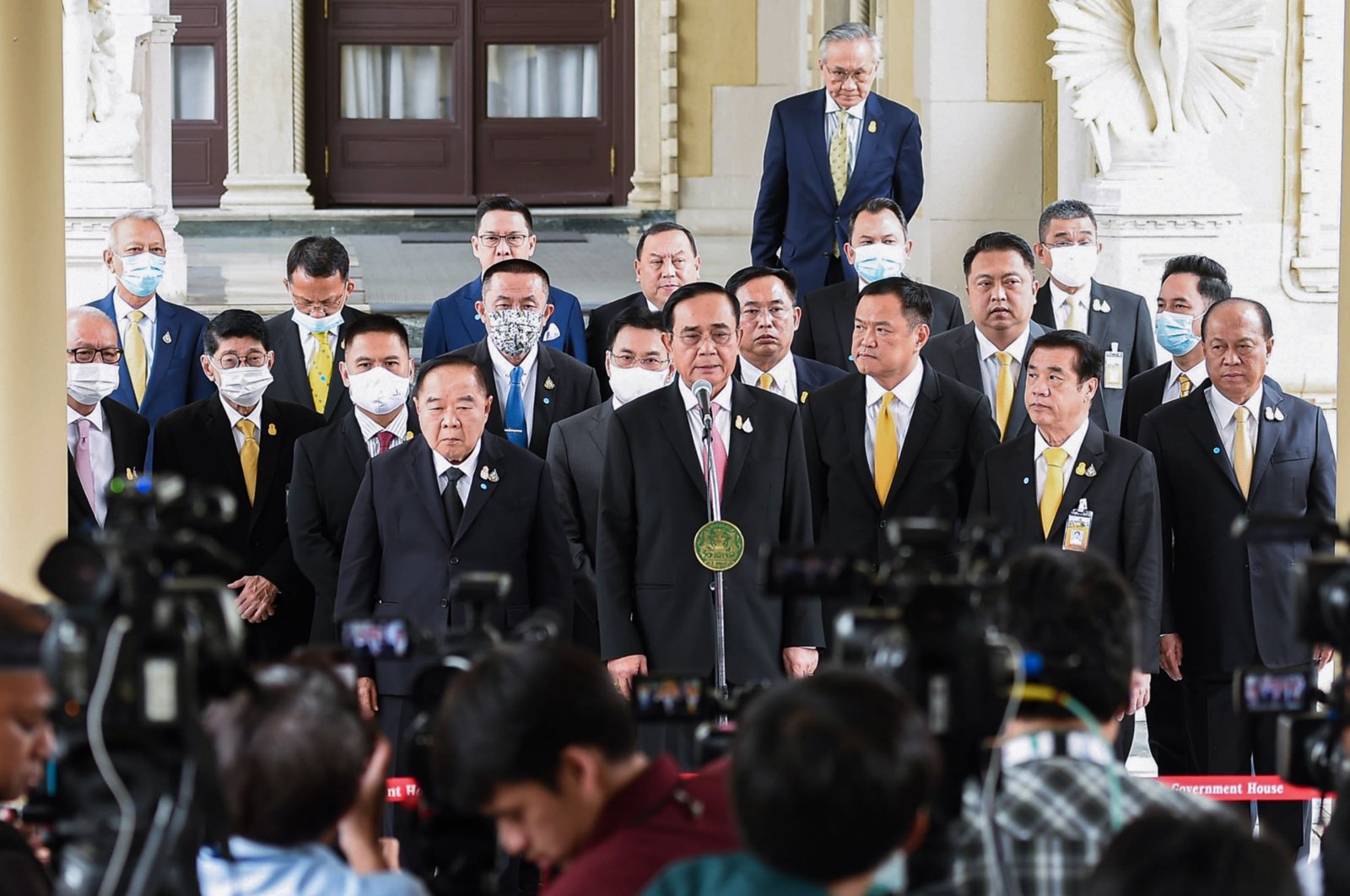 Thailand's prime minister rejected calls for his resignation Friday as his government stepped up efforts to stop student-led protesters from rallying in the capital for the second day in defiance of a strict state of emergency.

Police closed roads and put up barricades around a major Bangkok intersection where the protesters have vowed to gather again to push their cored demands, including that Prime Minister Prayuth Chan-ocha leaves office, the constitution be amended and the nation's monarchy undergo reform.

Police in riot gear moved into the area, while malls in the normally busy shopping district were closing early. Nearby mass transit stations were being closed to stop crowds of protesters from getting near the area. In addition to the security measures, heavy monsoon rains threatened to keep crowd numbers lower than the thousands that gathered the night before.

The student protesters said they would simply rally just down the street at another large intersection.

Prayuth's government declared a strict new state of emergency for the capital on Thursday, a day after protesters gathered in a different part of the city heckled a royal motorcade.

Such actions are unprecedented in Thailand, where those waiting for a royal motorcade regularly sit on the ground or prostrate themselves.

The state of emergency outlaws public gatherings of more than five people and bans the dissemination of news that is deemed to threaten national security. It also gives authorities broad powers, including detaining people at length without charge.

Some 10,000 protesters defied the decree Thursday to rally at the Bangkok intersection. A number of protest leaders have already been rounded up since the decree went into effect.

On Friday another two activists were arrested under a law covering violence against the queen for their alleged part in the heckling of the motorcade. They could face up to life in prison if convicted.

The protest movement was launched in March by university students and its original core demands were new elections, changes in the constitution to make it more democratic, and an end to intimidation of activists.

The protesters charge that Prayuth, who as army commander led a 2014 coup that toppled an elected government, was returned to power unfairly in last year’s general election because laws had been changed to favor a pro-military party.

But the movement took a stunning turn in August when students at a rally aired unprecedented criticism of the monarchy and issued calls for its reform. Using direct language normally expressed in whispers if at all, the speakers criticized the king’s wealth, his influence and that he spends much of his time outside the country.

Thailand’s royal family has long been considered sacrosanct and a pillar of Thai identity. King Maha Vajiralongkorn and other key members of the royal family are protected by a lese majeste law that has regularly been used to silence critics who risk up to 15 years in prison if deemed to have insulted the institution.

Conservative royalist Thais accuse the protest movement of seeking to end the monarchy, an allegation its leaders deny.

Wednesday's incident with the royal motorcade was stunned many Thais. Video that circulated widely showed members of a small crowd heckling a motorcade carrying Queen Suthida and Prince Dipangkorn as it slowly passed.

Security personnel stood between the vehicles and the crowd and there was no visible violence and none was described by witnesses.

Prayuth’s declaration of a state of emergency said the measure was necessary because "certain groups of perpetrators intended to instigate an untoward incident and movement in the Bangkok area by way of various methods and via different channels, including causing obstruction to the royal motorcade."

Prayuth said Friday that he had no plans to resign as he had done nothing wrong. He said his government hopes it can drop the state of emergency ahead of its normal 30-day duration "if the situation improves quickly."

The legal aid group Thai Lawyers for Human Rights said at least 51 people have been arrested since Tuesday in connection with the protests. Police on Friday went to search the offices of the Progressive Movement, a group formed by former lawmakers from a reform-minded political party that was controversially dissolved by the Constitutional Court.

The two activists charged over the incident with the queen are Ekachai Hongkangwan and Paothong Bunkueanum. Ekachai is a veteran activist who has been physically attacked several times, in apparent response to his criticism of the military.

Paothong, a university student, has been involved in organizing the protests.

The Wednesday incident in which the two were allegedly involved was stunning to most Thais, because, by tradition and law, members of the royal family are treated with the utmost respect.

"We were not notified by the police of the upcoming royal motorcade in which we had no way of knowing because they were not informing us," Paothong told reporters Friday.

"Once we knew that there was a motorcade of the queen and the heir presumptive to the throne I tried to break away from the line and use my megaphone to have everyone move away from the police barriers so the motorcade can pass through easily," he said.

The Ministry of Digital Economy, meanwhile, announced it would file complaints with police covering five Twitter accounts and five Facebook accounts inviting people to attend Friday's rally. Such posting could be deemed illegal under the state of emergency, as well as other laws.