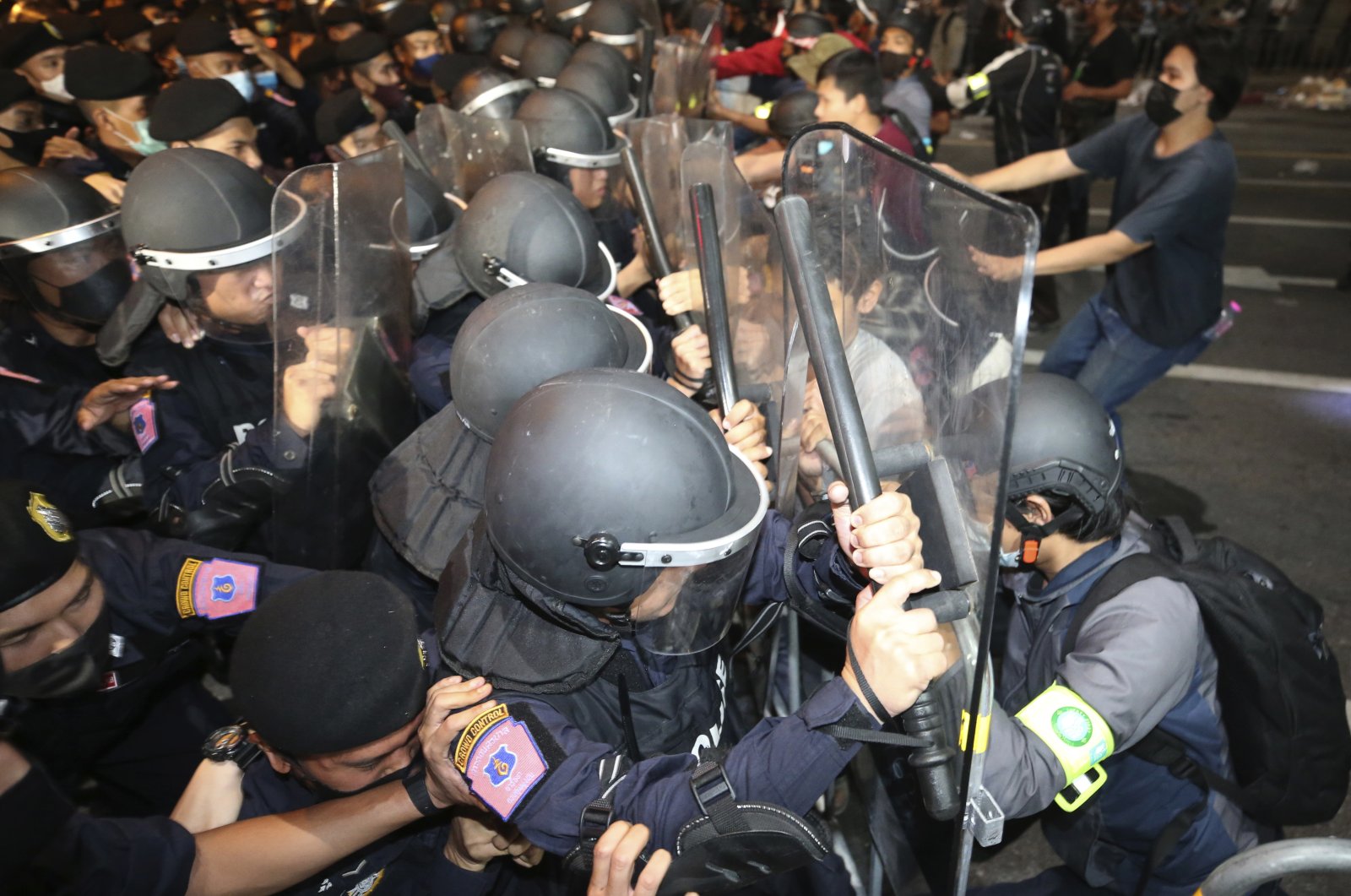 Thai police early Thursday dispersed a group of pro-democracy protesters who camped out overnight outside the office of the prime minister to demand his resignation, leading him to implement a “severe” state of emergency in the capital area.

Riot police advanced from multiple locations to force out a few hundred protesters who remained outside Government House, the seat of Prime Minister Prayuth Chan-ocha. Protesters were seen taken away into police trucks.

The police operation came after Prayuth declared a severe state of emergency in the Bangkok area to allow authorities to move against the protests. It bans unauthorized gatherings of more than five people.

Thailand is technically still under a state of emergency as part of coronavirus restrictions.

Before the police dispersal, a large number of protesters had already left the area after one of their leaders announced the end of the rally at Government House though a few hundred stayed on. Protesters also announced that the rally would move to a different location in the capital Thursday afternoon, but deputy police spokesman Col. Kissana Phathanacharoen warned them not to do so.

Police said they arrested more than 20 people for violating the state of emergency. They have not been officially charged. Among them were protest leaders Arnon Nampha, Parit “Penguin” Chiwarak and Prasiddhi Grudharochana.

“The scale of today’s early morning arrests seems completely unjustified based on yesterday’s events. The assemblies were overwhelmingly peaceful. These moves are clearly designed to stamp out dissent, and sow fear in anyone who sympathizes with the protesters’ views,” the group said in a statement.

The latest rally started on Wednesday with thousands of protesters marching from Bangkok’s Democracy Monument to Government House. It was the third major gathering by activists who want to keep up the momentum in their campaign for democratic change.

The protesters have drawn attention because of their demands for reforms to Thailand’s constitutional monarchy, which they claim does not properly operate in a democratic framework.

That demand has caused a huge controversy because the royal institution has long been considered sacrosanct and a pillar of Thai identity. It is also protected by a lese majeste law that mandates three to 15 years in prison for defaming the monarchy.

Conservative royalist Thais accuse them of seeking to end the monarchy, an allegation they deny. Before leaving Democracy Monument, several small clashes broke out between protesters and their opponents, who traded punches and threw plastic bottles as police tried to keep them apart.

The situation was complicated by King Maha Vajiralongkorn’s scheduled drive past the protest venue to attend a royal ceremony. The protesters said they would make way but there was a possibility that they could at a minimum show public disrespect for the crown. Several cars normally used by the royal family were seen on nearby streets but their occupants could not be confirmed. Unverified video and photos on social media showed what was purported to be protesters gesturing and shouting close to the vehicles, which would be unprecedented for Thailand, where the royal family has traditionally been revered.

The king made a similar drive past the area on Tuesday after police cleared tents set up near the monument and arrested 21 people on minor charges.

The protest movement was launched in March by university students but quickly put on hold as Thailand was gripped by surges in coronavirus cases. It came back in July, when the threat from the virus eased, and since then has again been spearheaded by students and publicized on social media.

The movement’s original core demands were new elections, changes in the constitution to make it more democratic, and an end to intimidation of activists.

The protesters charge that Prayuth, who as army commander led a 2014 coup that toppled an elected government, was returned to power unfairly in last year’s general election because laws had been changed to favor a pro-military party. Protesters say a constitution promulgated under military rule is undemocratic.