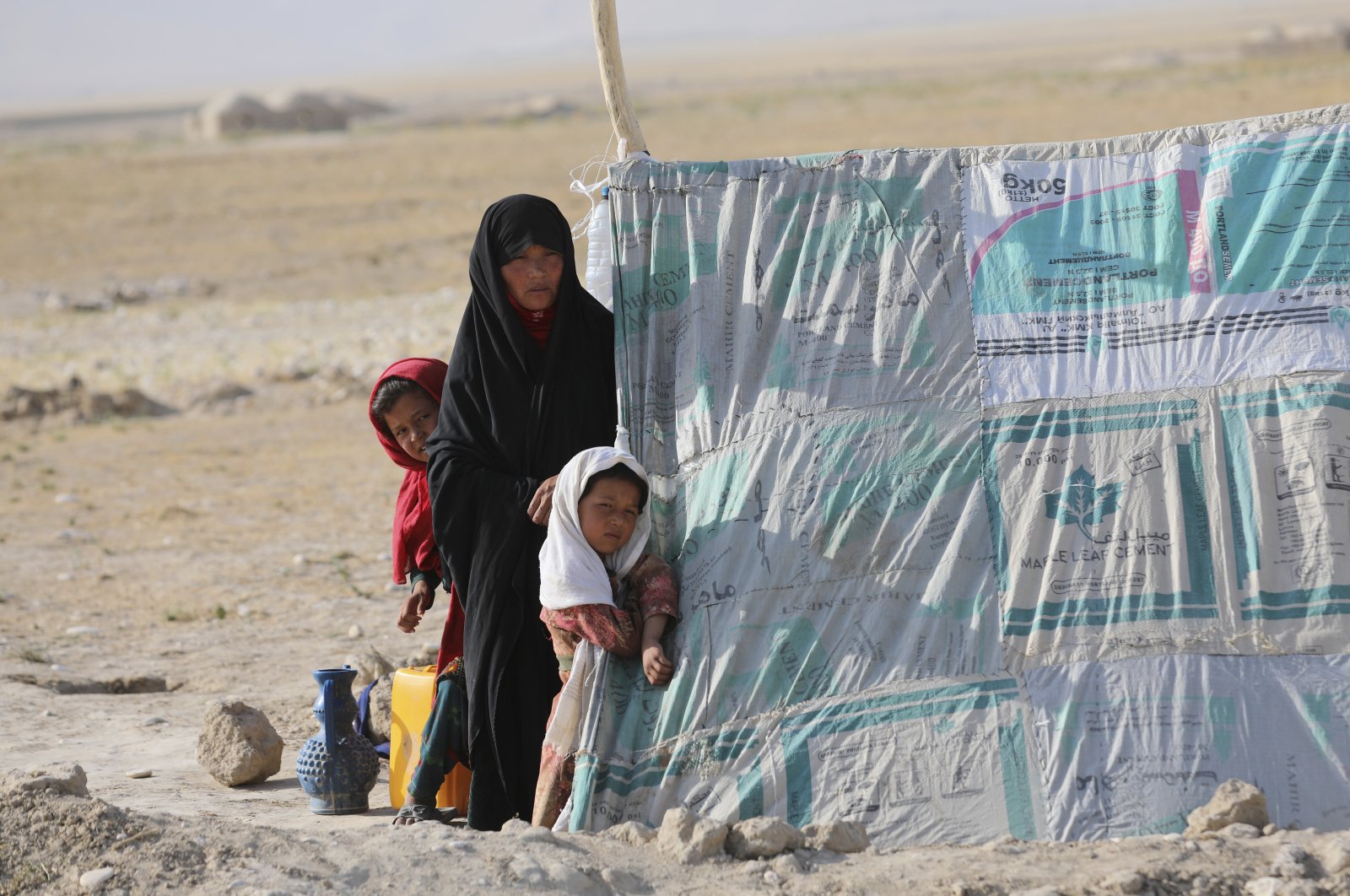 An internally displaced Afghan woman stands with her daughters in front a makeshift tent in a camp on a rocky patch of land, after fleeing fighting between the Taliban and Afghan security personnel, on the edge of the city of Mazar-e-Sharif, northern Afghanistan, July 8, 2021. (AP Photo)
by ASSOCIATED PRESS
Jul 13, 2021 9:08 am

In the last 15 days, Taliban advances have driven more than 5,600 families from their homes, forcing them to live in a makeshift camp as fighting between Afghan government and militia group intensifies

More than 5,000 Afghan families fled their homes as the Taliban advanced into the war-torn country, seizing control of 85% of the territory and reassuring the international community that citizens would be safe under their rule amid the withdrawal of foreign troops after 20 years of military presence.

Sakina, who is 11, maybe 12, walked with her family for 10 days after the Taliban seized her village in northern Afghanistan and burned down the local school. They are now among around 50 families living in a makeshift camp on a rocky patch of land on the edge of the northern city of Mazar-e-Sharif.

They roast in plastic tents under scorching heat that reaches 44 degrees Celsius (110 degrees Fahrenheit) at midday. There are no trees, and the only bathroom for the entire camp is a tattered tent pitched over a foul-smelling hole.

As the Taliban surge through northern Afghanistan – a traditional stronghold of U.S.-allied warlords and an area dominated by the country’s ethnic minorities – thousands of families like Sakina’s are fleeing their homes, fearful of living under the insurgents’ rule.

According to the government’s Refugee and Repatriations Ministry, Taliban advances have driven more than 5,600 families from their homes, most of them in the northern reaches of the country during 15-day period of time.

In Camp Istiqlal, family after family, all from the Hazara ethnic minority, told of Taliban commanders using heavy-handed tactics as they overran their towns and villages – raising doubts among many over their persistent promises amid negotiations that they will not repeat their harsh rule of the past.

Sakina said it was the middle of the night when her parents packed up their belongings and fled their village of Abdulgan in Balkh province, but not before the invading Taliban set fire to her school. Sakina said she doesn’t understand why her school was burned. In Camp Istiqlal, there’s not a single light, and sometimes she hears noises in the pitch blackness of night. "I think maybe it’s the Taliban and they have come here. I am afraid,” said the girl, who hopes one day to be an engineer.

Yaqub Maradi fled his village of Sang Shanda, not far from Abdulgan, when the Taliban arrived. He said they tried to intimidate villagers into staying. Maradi’s brother and several members of his family were arrested, "held hostage to stop them from leaving,” he said.

"Maybe he is released today, but he cannot leave,” Maradi said from inside his small sweltering plastic tent pitched over a sunbaked mud floor, with mattresses folded in one corner. A howling, brutally hot wind ripped through the tent as Mohammad Rahimi, the self-appointed camp leader, who also fled from Abdulgan, recalled how a poorly equipped militia force in his Zari district tried to defend against a larger Taliban force.

Rahimi named a handful of militia fighters he said died defending their district. In areas they control, the Taliban have imposed their own fees and taxes. Ashor Ali, a truck driver, told The Associated Press (AP) he pays the Taliban a 12,000 Afghani ($147) toll for every load of coal he brings from a Taliban-controlled part of neighboring Samangan province to Mazar-e-Sharif. That amounts to more than half of what he makes on each haul.

The Taliban are attending international conferences, even sending their ex-ministers on missions to Afghanistan from Qatar, where they have a political office, to assure Afghans they have nothing to fear from them, especially minorities.

The group says its methods and tenets are less severe. But if it’s a gentler face they are seeking to portray, fleeing residents say it seems many Taliban commanders in the field either haven’t gotten the message or aren’t listening. A February 2020 agreement the Taliban signed with the United States reportedly prevents the insurgents from capturing provincial capitals.

Yet two – Kandahar in the south and Badghis in the north – are under siege. In the capital of Kabul, where many fear an eventual Taliban assault, a rocket defense system has been installed, the Ministry of Interior said over the weekend. The statement offered no detail about its origin or cost.

The U.S., Russia, China and even Afghanistan’s neighbor Pakistan, where the Taliban leadership council is headquartered, have all warned the Taliban against trying for a military victory, warning they will be international pariahs.

Taliban leaders have vowed they are not doing so, even as they boast of their gains in recent meetings in Iran and in Russia, The Taliban blame the Afghan government for foiling efforts to jumpstart stalled talks that would elevate discussions to include leaders on both sides of the conflict.

Suhail Shaheen, the Taliban’s political spokesperson and a member of its negotiation team, told the Associated Press (AP) that on three different occasions his side waited for a high-level delegation from Kabul to come to Doha for talks. They never came, he said.

The Kabul delegation was to include former President Hamid Karzai, as well as Abdullah Abdullah, the head of the National Reconciliation Council, and senior warlords like Ata Mohammad Noor, one of the most powerful northern commanders.

Afghan officials familiar with the planned meetings confirmed their intent to travel to Doha and participate, but said President Ashraf Ghani has been reluctant, often obstructing efforts. They spoke on condition of anonymity to discuss the negotiations with reporters.

Last week, President Joe Biden urged Afghanistan’s leaders to find unity and said it was up to Afghans to bring an end to decades of war. With 90% of the final U.S. and NATO withdrawal completed and its top commander Gen. Scott Miller having relinquished his command, Washington is nearing the end of its "forever war.”

Maradi, whose brother was refused permission to leave, said he doesn’t trust the Taliban promises. Many are still haunted by memories of the tit-for-tat massacres that had characterized the Taliban rule in areas dominated by Afghanistan’s ethnic minorities in the late 1990s. Mazar-e-Sharif was the scene of horrific bloodletting.

In 1997, Uzbek and Hazara fighters killed some 2,000 ethnic Pashtun Taliban, who were captured in the city after a truce deal fell through. In some cases, they forced the captives to jump into pits on the plains north of the city, then threw in grenades and sprayed them with automatic weapons.

The next year, the Taliban rampaged through Mazar-e-Sharif, killing thousands of Hazaras and driving tens of thousands more out fleeing to Kabul. At Camp Istiqlal life is brutal. There’s little water to wash, most meals are bread and tea brought to the camp by Rahimi, the leader.

Fatima, who cradled her sickly 2-month-old daughter Kobra, said she hadn’t had much food or drink since arriving about one week ago and was unable to produce enough milk to feed her infant. Another mother showed blisters covering the arms and legs of her 2-year-old son, Mohammad Nabi. In the nighttime blackness he knocked over scalding water.

They said they have no money for a doctor. The camp residents say no one has come to help them. At the edge of the camp, Habibullah Amanullah cried, his 7-year old daughter hiding behind his arm.

"She asks me for something to eat. What can I tell her? We have nothing.”