US, Taliban inks peace deal in Doha to end years of war 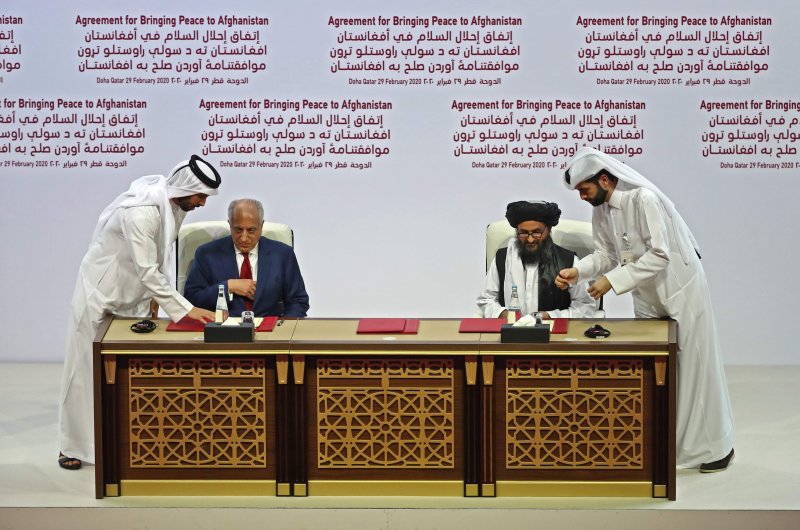 (L to R) US Special Representative for Afghanistan Reconciliation Zalmay Khalilzad and Taliban co-founder Mullah Abdul Ghani Baradar sign the US-Taliban peace agreement during a ceremony in the Qatari capital Doha on February 29, 2020. (AFP Photo)
by Compiled from Wire Services Feb 29, 2020 9:22 am
RECOMMENDED

The United States and Taliban have signed a peace deal in Qatar on Saturday to end the 19-year-old war with the U.S. agreeing to withdraw its remaining forces in Afghanistan in 14 months.

Speaking at the ceremony, U.S. Secretary of State Mike Pompeo said the agreement will mean nothing if concrete actions are not taken on commitments and promises.

Taliban political chief Mullah Abdul Ghani Baradar for his part said the group is committed to the agreement.

In a statement, Trump said the U.S. was "making substantial progress" on his pledge to end the country's involvement in the war in Afghanistan and bring troops home after more than 19 years.

According to a joint statement released by the U.S. and Afghan governments, the U.S. and NATO would withdraw all troops in Afghanistan within 14 months if the Taliban upheld its commitments.

Delegates from at least 19 countries and six international organizations, including the United Nations, NATO and the European Union, were present at the ceremony.

Taliban leaders pledged their commitment to peace ahead of the expected signing. "It is going to be a brighter day for Afghanistan," said Mullah Abdul Salam Hanafi, a member of the Taliban political office in Qatar's capital Doha, where the deal is set to be signed.

"We will satisfy everybody. Violence from both sides is in the past. We have come here with an open heart," said Anas Haqqani, the younger brother of top Taliban leader Sirajuddin Haqqani, on Friday.

The deal is being signed after years of on-again, off-again talks between U.S. diplomat Zalmay Khalilzad and the political office the Taliban set up in 2013 to initiate dialogue with the world.