Thousands of women across Australia march against sexual violence 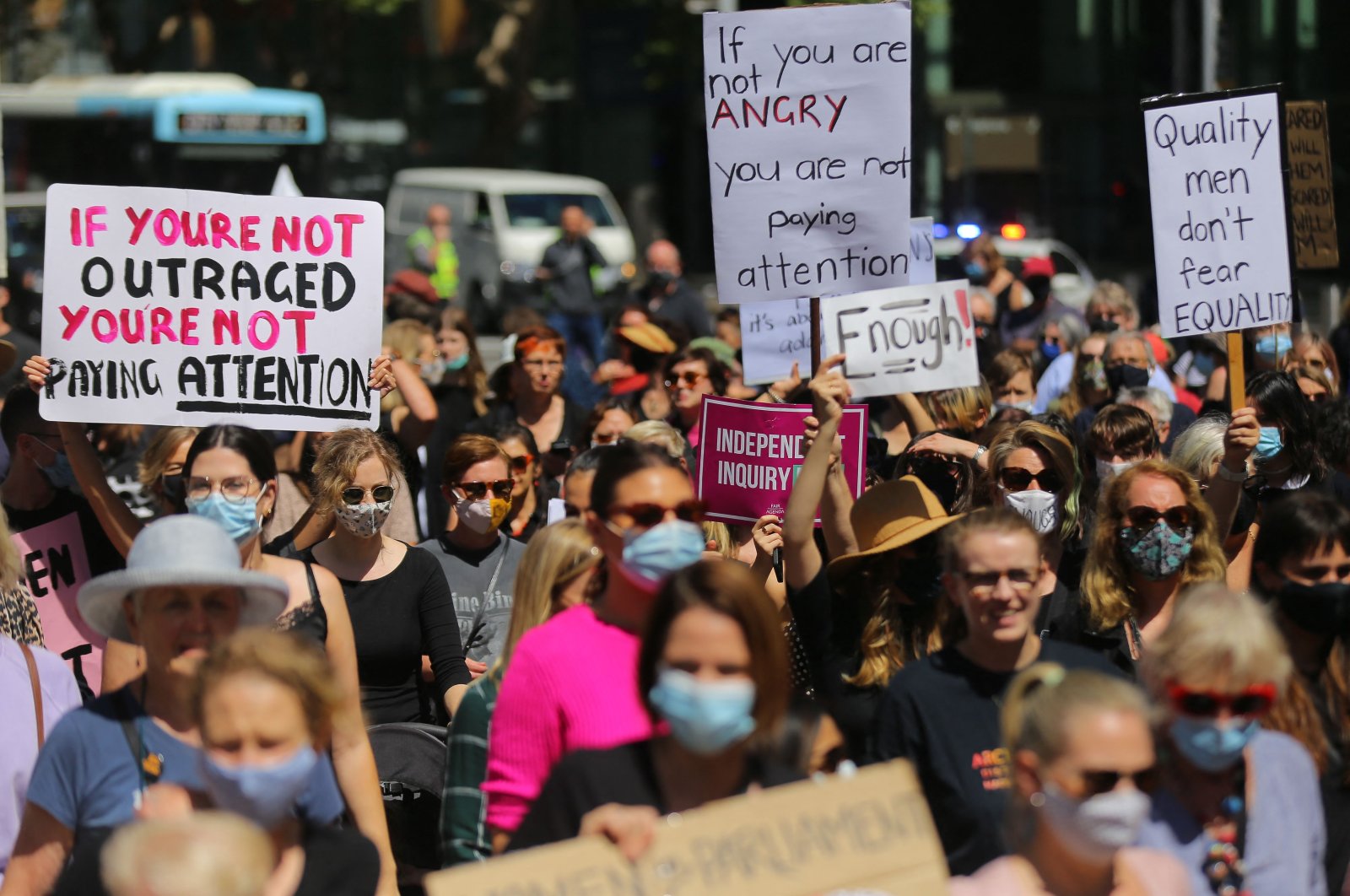 Tens of thousands of women protested across Australia against sexual violence and gender inequality on Monday as outrage grew over rape allegations that have shocked the conservative government.

The #March4Justice rallies were held in more than 40 Australian cities and towns, with a major demonstration in Canberra following allegations of sexual assault in the nation's parliament. Dressed mostly in black, the crowd gathered outside Parliament House holding aloft placards with slogans including "You're Not Listening," "How Many Victims Do You Know?" and "I Believe Her."

Protester Kathryn Jamieson, who traveled from Melbourne to take part, said she was "fuming with rage." "I wanted to be at the heart of the matter, I've completely had enough," she told Agence France-Presse (AFP). "We need immediate change – I'm sick of women not being believed."

Former government staffer Brittany Higgins alleged publicly last month that she had been raped by a colleague in a minister's office in 2019. And earlier this month, Attorney-General Christian Porter vigorously denied swirling accusations he had raped a 16-year-old girl in 1988 when they were both students.

The controversy has placed growing pressure on Prime Minister Scott Morrison, who critics say has fumbled the government's response to the scandals.

The latest gaffe came Monday when he told parliament: "Not far from here such marches, even now, are being met with bullets, but not here in this country" – drawing furious interjections from opposition politicians and stunned reactions online.

"The prime minister thinks women should be grateful that we weren't shot for rallying for our own safety," Greens Senator Sarah Hanson-Young tweeted. Public anger at Morrison's government was reflected in a new opinion poll Monday showing voter support has fallen to levels not seen since 2019 when he vacationed in Hawaii while massive bushfires were raging in Australia.

The government has ordered an independent inquiry into parliament's workplace culture and established new staff support services but activists say systemic change is now needed – not just in politics but across Australian society.

Higgins told the crowd in Canberra her story was "a painful reminder to women that it can happen in Parliament House and can truly happen anywhere." "We fundamentally recognize the system is broken, the glass ceiling is still in place," she said.

"We are here because it is unfathomable that we are still having to fight this same stale, tired fight."

No senior government ministers attended Monday's rallies, and organizers refused Morrison's offer to speak in private, saying a closed-door meeting would be "disrespectful" to alleged victims.

An estimated 10,000 joined the protest in Melbourne, with thousands more in major cities including Canberra, Sydney and Brisbane. Several thousand also rallied in Porter's hometown of Perth on Sunday.

The #March4Justice is demanding a raft of measures including independent investigations into all cases of gendered violence, a boost in public funding for prevention and the implementation of recommendations from a 2020 national inquiry into sexual harassment at work.

Australia's parliament has been repeatedly criticized for a "toxic" workplace culture that has allegedly spawned persistent bullying, harassment and sexual assault. The ruling coalition has been accused of not doing enough to support female party members, including after a spate of women quit parliament ahead of the 2019 election, with several citing bullying as a factor.

Local media also reported that women in the opposition Labor party had recently set up a Facebook page that details alleged sexual harassment by male colleagues and politicians. A group of independent and minor-party female politicians on Monday announced they would attempt to amend a "loophole" in legislation that shields members of parliament and the judiciary from liability for workplace sexual harassment.

"It seems crazy that we would be, in 2021, having to present an amendment to a legislation that is vital to ensure all workplaces in Australia are safe and secure and respectful," independent MP Zali Steggall said.

On Monday, Porter launched defamation proceedings against public broadcaster ABC, which first published the allegations against an unnamed senior minister, with lawyers saying the attorney-general was "easily identifiable" in the article and has since been subjected to "trial by media".

Porter remains on medical leave in the wake of the allegations, as does Defense Minister Linda Reynolds, who is accused of mishandling the Higgins case.